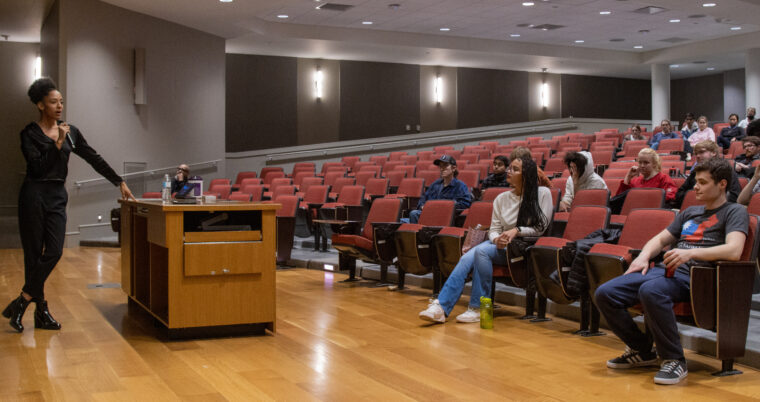 Amala Ekpunobi, a conservative speaker whose visit angered many students that view her as transphobic, spoke about her ideological shift to conservatism on Dec. 9. Around 50 students and community members came to hear her speak, and a handful asked questions that pushed against her views on critical race theory, gender, and sexuality.

Ekpunobi is a media personality at PragerU who hosts a podcast and speaks at universities around the country about her self-described shift away from leftism to conservatism. The College Republicans secured over $11,000 in funding from the Student Union Treasury for her visit.

According to Junior Nathaniel Hope, President of the WU College Republicans, the organization sought out Ekpunobi for her background as a leftist-turned-Republican, hoping for her story to resonate with WashU students.

“There are voices on campus that reject the value of freedom of speech in the name of progressivism in a way that sets us back as a society,” Hope said. At the onset of the speech Hope said that he hoped attendees might “adopt a worldview that is more cognizant of not only your [worldview], but of those around you.”

“I think she’s fascinating,” Dr. Carrie Hruza, an attendee of the event, said. Hruza said she listens to Ekpunobi’s podcasts, which is why she came to the speech. “I love that she, as a young person, encourages other people just to think critically about things and to accept everybody’s viewpoint.”

Ekpunobi started her speech by discussing her transition from a self-avowed leftist activist to a conservative speaker, saying that she is “by no means an intellectual.”

“I’m simply somebody who went through an ideological transformation, and I’m now in a space where I share that with people because, by virtue of being born a Black female, my voice has become abundantly important in today’s day and age — not that it should be because of my race and my gender, but because we’ve set ourselves in an ideological hole where, now, I’m able to say things that a lot of people are unable to say in today’s climate.”

Ekpunobi spoke about being raised by a single mother of three who is an “active leftist,” who works for a left-leaning organization in Florida. She said that the environment in which she was raised made her believe that even if she tried “as hard as I possibly could to get success in this country, there would constantly be barriers placed in front of me simply because I was born the way I was born.”

“I was super angry, and I would not shut up about it,” she said. Her process of changing the lens through which she looked at the world was not a light-bulb moment. “It was a gradual process of me being confronted with things that didn’t quite make sense.”

She referenced a few of these moments that made her question her political ideology, including a day she attended a leftist political organization’s meeting and a coworker wrote on a blackboard that the cisgendered white people in the room should refrain from speaking.

Ekpunobi said that this moment of silencing white people didn’t sit right with her, given that she was going to be going home to a white family who had been “taking care of me my entire life.”

Shortly after that interaction and several others that called her political perspective into question, she said that she came upon a PragerU video about how “cops are the good guys” that sparked a political realignment for Ekpunobi. About a year and a half later, she downloaded TikTok and posted a video about her story of changing her ideology, and ended up landing a job at PragerU.

In her speech and her Q&A, Ekpunobi addressed criticisms against her ideology, which many view as offensive or lacking historical veracity.

“[Leftist] ideologies safeguard themselves from criticism by labeling you as a racist, or a transphobe, or a homophobe, or a fatphobe,” she said. “You’ll find [that] all of these theories have a set of insults coupled with them that will get thrown at you if you criticize them.”

Ekpunobi then went through the accusations of misogyny, racism, and transphobia that have been thrown at her.

She said that she is not a misogynist, but believes it’s “important to be able to acknowledge the biological and innate differences men and women have.” She added that men and women can step “outside of those differences,” but that acknowledging traditional gender roles is “largely backed in objectivity.”

To address accusations of racism, she said that “what qualifies somebody as racist is thinking that somebody is superior or inferior based on nothing more than race,” and she does not “happen to hold any of those positions.”

She added that she believes that the “prevalent narrative” of systemic racism in America is harming a lot of young minds in this country — particularly people of color, who are taught that they are being held back by systemically racist structures throughout their lives.

Ekpunobi also addressed the repeated accusations of transphobia from people around the country and at WashU.

“I want to make it clear that if you are [an] adult who struggles with gender dysphoria or is interested in sexual assignment and going through a medical transitional period, by all means, as an adult, make the choice you see fit.”

However, later during the Q&A portion of the event, she talked about Lia Thomas, a trans swimmer at the University of Pennsylvania, in a way that seemed dichotomous to her stating that she believes that trans adults should make choices that they see fit.

Ekpunobi said that Thomas, “whether or not he or she is aware of what they’re doing, is opening up a space where [women are] going to be harmed in sports” and myriad other spaces in the country, like prisons.

Branden Rothenberg, a Student Union Treasurer who voted “yes” to the $11,000 appeal to fund Ekpunobi’s visit, said that Ekpunobi’s comment about Thomas was “nasty, and can be interpreted [as] borderline hate speech.” He also said that “the statement is reflective of something that’s very wrong with the Republican Party at this time.”

When asked if Ekpunobi’s comment about Lia Thomas was transphobic, Hope said “Amala addressed those concerns during her speech and the importance of ideological diversity on campus, so that people can feel comfortable expressing their opinions or perceptions.”

During the Q&A portion of the event, several students asked questions about Ekpunobi’s perspective on systemic racism and present-day issues that disproportionately impact Black Americans.

One attendee cited research on the stark difference in the health and social outcomes of a predominantly Black neighborhood in North St. Louis versus the predominantly white suburb of Clayton. The attendee asked, “If you don’t believe in systematic racism, how do you account for this?”

Ekpunobi said that systematic racism is often not at the root of these racial disparities. “Often, there are other explanations — cultural explanations — for what’s happening, but I don’t completely take out racism as a slice of the pie.”

Ekpunobi never specified why she believes there are cultural differences in the United States that would lead people in different communities to commit crimes at different rates, even in response to questions that explicitly asked her to address this point.

Another student asked about her views on Florida’s passage of the Parental Rights in Education Bill, more commonly referred to as the “Don’t Say Gay Bill.” The student specifically asked if she would be against a kindergartener reading a story in class that featured a gay couple.

“If you’re just showing a picture book and it has two dads in it, I’m not upset about it,” she said. “I think [that] what conservative parents are [specifically] really upset about are things [that are] much more nefarious than showing two dads in a book — talking about homoeroticism and pornography, and different ways to engage in sexual acts. Gender confusion.”

Rothenberg reconsidered his “yes” vote on funding Ekpunobi’s visit after attending the talk and witnessing a small audience.

“I don’t think that what Amala says is hate speech,” he said. “[But] on the question of whether this event was a benefit to our campus, especially considering the pathetic turnout, I would claim that this [event] was not worth $11,000.”

Rothenberg emphasized the Student Union’s responsibility to ensure that student funds go towards activities and events that a large number of students attend.

“We are spending students’ money, and we should be spending it carefully,” Rothenberg said.

Hope, on behalf of the College Republicans, said that “We were really pleased about the turnout.” He added that the club was “thankful to welcome WashU’s first [major] conservative speaker in years.”

WashU student Oliver Chonoles came to Ekpunobi’s talk because he has a friend in College Republicans and heard a lot of “buzz” about the event.

Referring to people who did not attend the event and were angered by its funding, Chonoles said he thinks “that everyone would be better off with the assumption that the person they’re speaking to has the best of intentions.”

“We invite those who believe differently from Republicans to come to more [of our] events and ask questions,” he said.