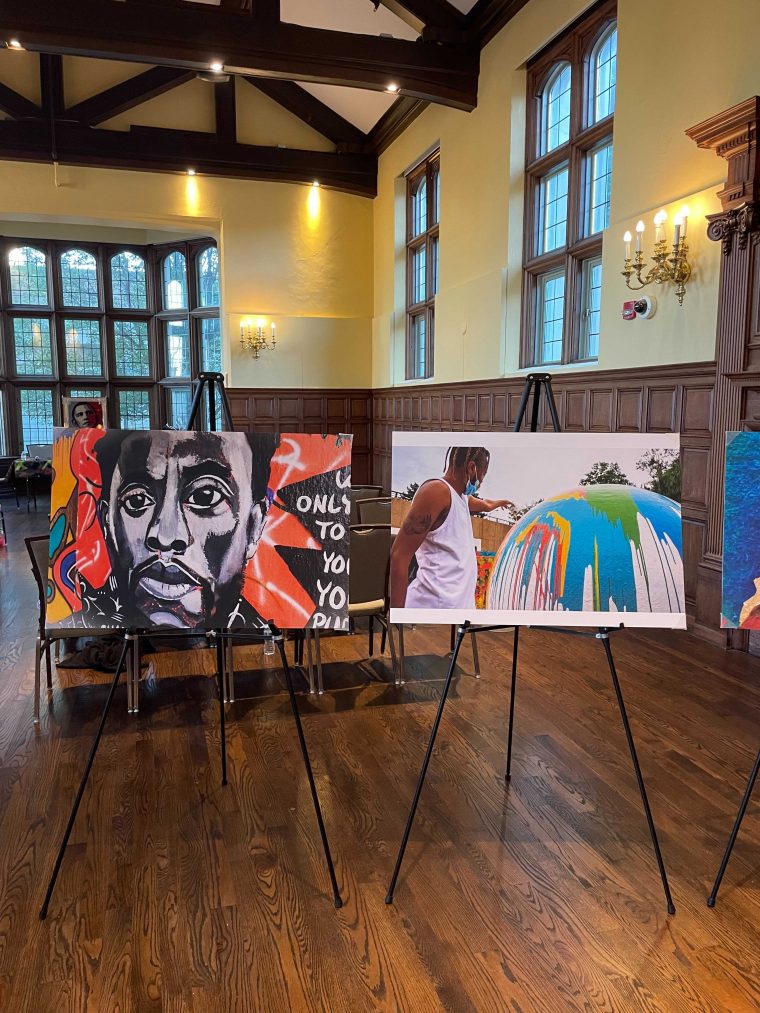 The artists behind the “The Never Ending Story” mural held a conversation about race and free speech, along with a signing for their photo book commemorating their mural, Sept. 28.

The mural was initially painted in the South 40 underpass in the summer of 2020, before being defaced by a white supremacist just under a year ago. The mural was a collaborative effort between artists De’Joneiro Jones, Roland Burrow, Danny McGinnest, Brock Seals, Damon Addison and Nicholas Coulter, who talked about their relationships with art as panelists.

Jones spoke about how the aftermath of the vandalism took away the artists’ ability to control the narrative of the piece. When the mural first debuted, he said that it was immediately deemed a Black history piece, but it extends beyond just celebrating Black culture and history.

Burrow talked about his inspirations going into the piece and what he chose to focus on, primarily youth and mental health. “It’s important to take these things more seriously,” he said.

McGinnest echoed a similar sentiment and talked about the different ways in which people can take care of their mental health through their actions.

From filling in missing pieces of world history, to emphasizing mental health, to highlighting important Black cultural and political figures, a broad range of meaning went into the project’s creation. However, much of that meaning was overshadowed by the controversy that followed, with news coverage mainly focusing on the incident instead of the mural.

“It’s sad that it had to be something bad happening for it to go global,” Seals said.

Beyond the work itself, Jones talked about the importance of mentoring younger artists. Seals also spoke to this point when he said that he goes to elementary and middle schools to showcase and discuss his work, and if he had seen someone who looked like him being an artist when he was a kid, it would have inspired him.

Jones added that his goals for the future are to travel and create art outside of St. Louis to broaden the scope of representation. In the book’s closing remarks, Jones wrote about the value of the work highlighted throughout.

“I hope you’ve gotten a sense of pride and dignity from the culture, education and aesthetic of the art we created during a much needed time,” he wrote.

The event was hosted by the Center for Diversity, Equity, and Inclusion, and the canvas prints of the memorial will be displayed in their office in the Danforth University Center.