Washington University students and administrators repainted panels on the South 40 Underpass Monday, covering up the remnants of the white supremacist vandalism that had marked the Underpass since the middle of December.

The panel that previously contained John Lewis’ face now reads “Black Lives Matter,” while Chadwick Boseman’s and Geoge Poage’s panels contain painted flowers and handprints from the students and administrators who repainted the panel. Immediately after the vandalism, students used nail polish remover to remove the name of Patriot Front, the white supremacist organization whose logo was spray painted over the panels, but the white paint itself had remained there for over a month.

The idea to cover up the vandalism was one of many proposals brought up in a student feedback space hosted by the Center for Diversity and Inclusion (CDI) in the weeks following the incident. Junior Aaliyah Allen attended the feedback space and had suggested painting over the vandalized portions.

“We were all a little bit uncomfortable with people coming back [to campus] and the graffiti still being up,” Allen said. “So I basically suggested that we cover it up with something nicer for now, while we figure out what exactly we want to do with the mural.”

However, in the long run, Allen said that covering up the mural is just one of many steps that the University should take towards confronting the white supremacy and hate that prompted the vandalism.

“Some type of permanent art installation, preferably done by local Black artists, I feel is kind of the only real path forward to addressing what at least a lot of the Black students I’ve been talking to have said they want,” she said. 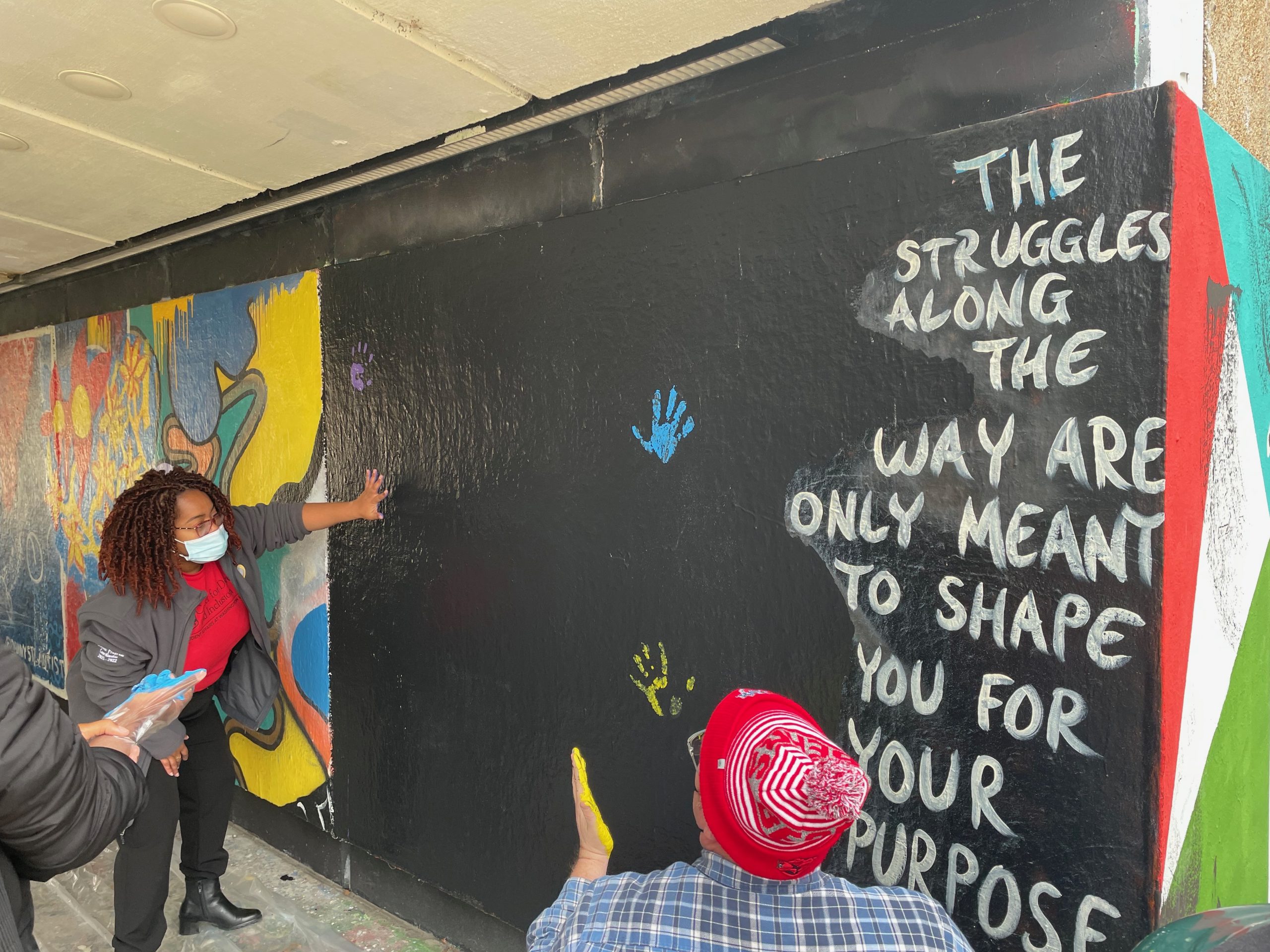 Dr. Aeryel Williams (left), the training and education specialist at the Center for Diversity and Inclusion, places her handprint on the mural panel Monday, as Associate Vice Chancellor Rob Wild takes his hand off the wall. (Photo by Ted Moskal / Student Life)

In addition to new art on campus, many students also want more substantive changes from the administration. Following the vandalism, the Association of Black Students, Students for Black and Palestinian Liberation and the Black Senior Alliance collaborated on a statement that called on the University to provide transparency into the vandalism investigation, reassess the role of the Washington University Police Department and pay the initial artists to restore the mural and for the vandalism damages.

“Right now, a big thing from the admin[istrative] side is transparency and like actual communication,” Allen said. “From my knowledge, they haven’t responded to the ABS community statement, and there haven’t been any updates on the investigation… Especially as we’re getting ready to come back in person, a real opportunity for Black students specifically to speak on this issue with administration and to actually get a response back would be nice.”

University leaders have said there is an ongoing investigation into the vandalism and that they hope to provide more information in the near future. “Since the investigation is still active, we really can’t talk about the case at this time,” Vice Chancellor for Marketing and Communications Julie Flory wrote in an email Wednesday afternoon in response to Student Life’s request for an interview regarding the vandalism and investigation.

Vice Chancellor for Student Affairs Dr. Anna Gonzalez said in a Tuesday interview with Student Life that as students return to campus next week, the University plans to create opportunities for reflection and dialogue about the vandalism. 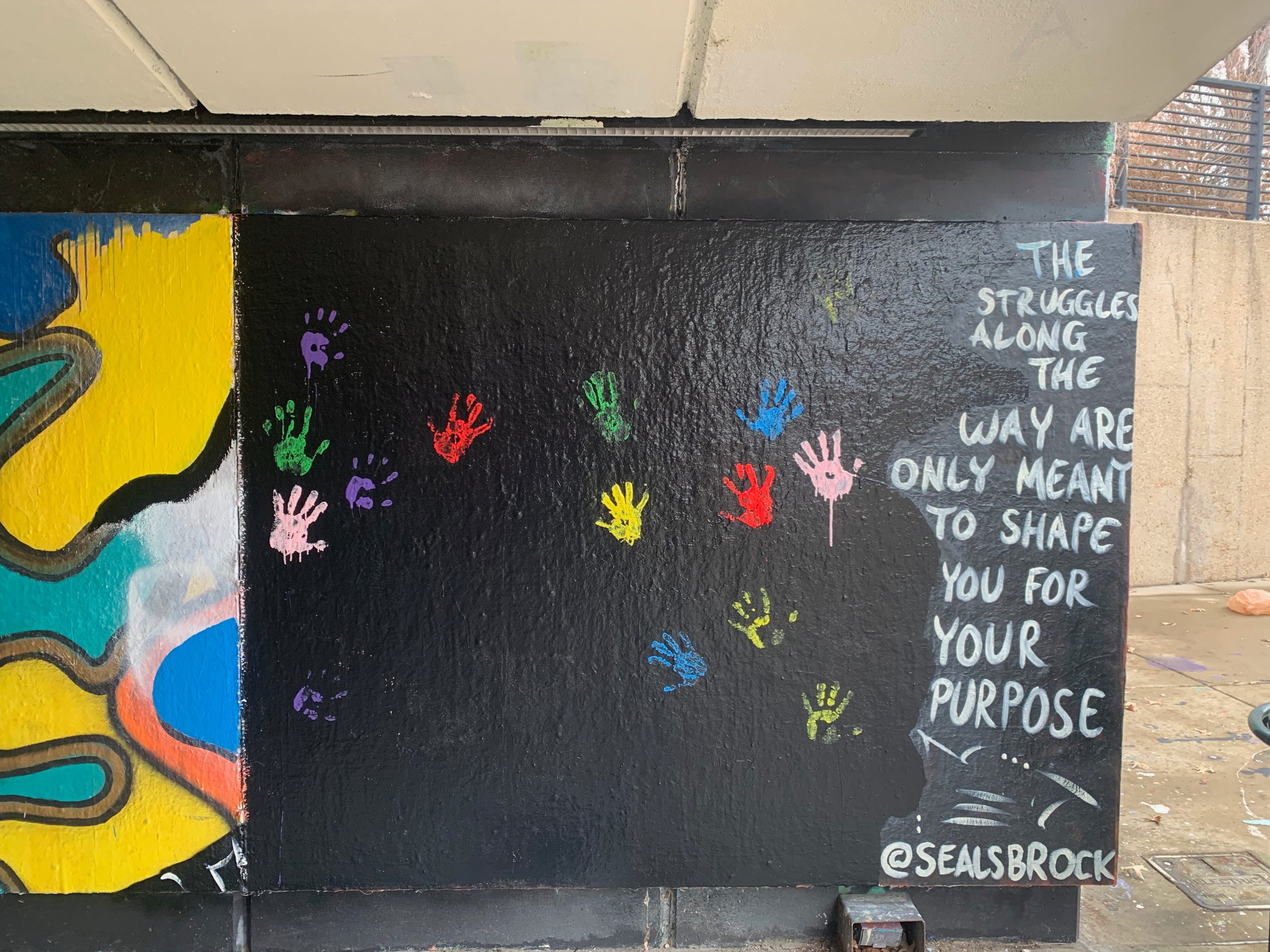 “Some of our diversity thought leaders are really talking about a Day of Dialogue, so that’s been in the plans,” Gonzalez said. “I’ve heard through the grapevine that some students would like to have us do a program or a set of dialogue programs specific to what happened, but also [discussing] white supremacy and the history of white supremacy in its current standing in St. Louis. So we’re moving forward on that.”

Beyond the immediate mural repainting, Campus Life and Student Union are still in the process of deciding what exactly the underpass panels will look like for the rest of the spring. They were originally intended to revert back to student group advertising spaces in the spring, but in light of the vandalism, Gonzalez said that this may not be the case depending on Campus Life and SU’s decision.

“Initially, before all of this happened, [student groups] wanted to have the underpass to start promoting their events,” Gonzalez said. “Now because of what happened… I think many groups will be supportive and sensitive to moving that timeline to the fall. There are so many hard parts about this, and one is [that] we’re being forced into a timeline by white supremacists.”

Organizers of Monday’s repainting event chose not to widely publicize it to students, due to concerns that a large gathering could potentially spread COVID-19. Allen said that it would have been nice if larger groups like the Association of Black Students had been asked to participate in the process, but said she understands the need to keep the group size down. Slightly over a dozen people attended the repainting.

“As far as the actual restoration, I think what they chose [in terms of the number of people involved] makes sense, just because they’re really aware of covid,” Allen said. “But I guess I do wish that more people had been invited to the CDI conversation, especially because some people who were there weren’t necessarily like key stakeholders in the Black community.”

Gonzalez added that students had taken the lead throughout the process of responding to the vandalism.

“Our students have stepped up,” she said. “Even before this, they reported the incident, they cleaned up what they could with those hateful images and messages, they advocated for diversity, equity [and] inclusion and they’re trying to make the school be better.”