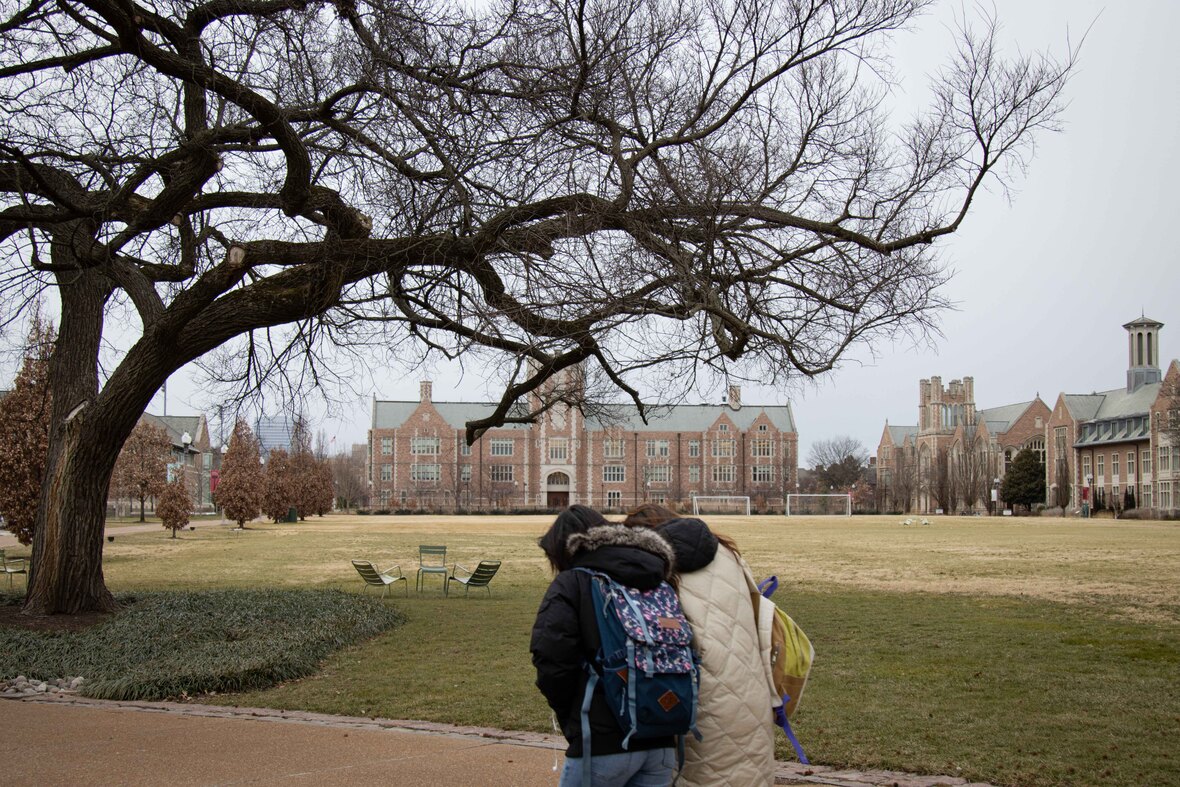 Washington University’s two week long shift to online instruction due to the omicron variant has been largely met with disappointment – as well as understanding – from students who were reluctant to once again attend classes virtually and, for many, not return to campus until the very end of January.

Jen Smith, the vice provost for educational initiatives, explained in a statement to Student Life earlier this month that since many experts expect omicron cases to peak in January, administrators hope to avoid having that peak overwhelm the University’s resources. Many students understand the need to avoid an omicron surge on campus, but are still frustrated with the difficult situation.

Students’ reactions to the spring plan have varied based on their personal circumstances, but have generally included disappointment over more lost in-person schooling, appreciation for the health measures that the University is taking, concerns regarding mental health and confusion over the plan’s details.

For Elizabeth Girling, a sophomore from Jackson Hole, Wyoming, the University’s decision meant that simply attending virtual classes would be a struggle.

“When I first read that email, I just started crying,” she said. “I knew that being online was gonna be a huge deal for me because, of course, living in Wyoming, my WiFi connection is so bad, like unbelievably bad.”

Girling’s parents pushed her to take a gap semester and to consider taking a class at the University of Wyoming this semester. She said that the way her parents and other parents she has heard of have framed the decision as “Why pay 40 grand a semester for an online class when you can go to a state university and have an in person class for two grand?” Still, Girling decided to continue with her courses this semester.

Sophomore Cindy Wang was less concerned about how the plan would affect her personally, although felt that the plan lacked specificity and was announced later than it should have been.

“I personally am fine with having a two-week push back,” she said. “I’m in a good situation family-wise, financially that I can stay in my home, and do classes online. I know, for some people that situation might be different, which is why I guess the University did say they would have exceptions to coming back on the 28th.”

However, Wang was critical of the University’s timing and communication strategy for the announcement. She said that some universities had announced their in-person delays a week earlier than Washington University, so she “was already under the impression that we were going to be in person,” and ended up having to cancel her flight and change plans that she had made in St. Louis. She also said that the University “should have been more in depth about what they mean by partial refunds [for housing and dining services that students would be unable to access while learning remotely].”

The University’s spring plan FAQ notes that “students living in Residential Life housing who do not return prior to January 28, the university will offer a partial credit of housing fees.” A partial refund of dining fees will also be offered to students who live in Residential Life housing and have meal plans, but not to students with off-campus meal plans.

Students also detailed different preventative health measures that they would like to see adopted in the spring.

First-year Alexandra Weiss thought the University would have mandated the booster and weekly testing, similar to many other major universities, before moving school online.

Weiss also discussed changes that she thinks the University should implement to campus life once students do return.

“I feel like WashU one hundred percent has the resources to bring back weekly testing, and I feel like for all of the waves of COVID, it’s most necessary for omicron given how contagious it is and how mild the symptoms are for most people,” Weiss said.

According to Vice Chancellor for Marketing and Communications Julie Flory, the University will continue to provide free diagnostic testing for all students, faculty and staff, but will not mandate surveillance testing for vaccinated individuals.

Burrows also touched on the generally milder symptoms of the omicron variant, saying that since 98% of faculty students and staff are fully vaccinated, the University should have remained open.

While he doesn’t think people should “fully discount the dangers” of COVID-19, “the symptoms are comparable with the flu,” Burrows said. “I don’t think it poses a big enough threat to shut down the school.”

Burrows’ point is part of a larger discourse taking hold globally about how to address health threats for populations at different risk levels. He responded to a follow-up question from Student Life about how a return to in-person classes might affect immunocompromised individuals, saying that there should be “some sort of accommodation for those students in particular, but I think those students definitely aren’t the majority.”

“I mean, we’re college students, we’re young. We’re, for the most part, at least, healthy,” Burrows said. “And you know, [to] take it away from COVID specifically; there’s always going to be risks that are particular to a certain group of people,” Burrows said. “And I think my question is, do you shut down the entire college, who for the most part is not at risk, for the sake of these people who might be at risk?”

Wang pushed back against the idea that the benefits of an immediate return to in-person classes outweigh the risk to students who might be at a higher risk to omicron.

“I know some people were complaining that online classes…will be horrible mentally and academically, and… I agree completely,” Wang said. “But at the same time, I think it’s safety first, one hundred percent.”

Weiss added that the needs of immunocompromised students often end up being overlooked, but should absolutely not be disregarded.

“I think people are forgetting… that there are a lot of students at WashU that are immunocompromised or are at risk for long-haul COVID… I feel like everyone should just be a little more mindful of that,” she said.

However, Weiss also stressed the need to be mindful of students whose mental health may suffer as a result of online classes.

“The second half of my senior year, I was in my apartment doing online school and it just did not work,” she said. “That’s definitely gonna take a toll on the mental health of WashU students which they’re not going to work to address.”

“I can’t tell you how hard it is to watch an organic chemistry lecture online and pick up the material,” she said.

Although the two week period has presented a variety of different challenges for students, depending on their personal circumstances, University leaders have stated they have no reason to believe that remote instruction will extend beyond these first two weeks. In-person classes are scheduled to resume Monday, Jan. 31, when students can, in the words of a Dec. 31 email to engineering students from Aaron Bobick, the dean of the school of engineering, “return to the new normal-ish mode.”