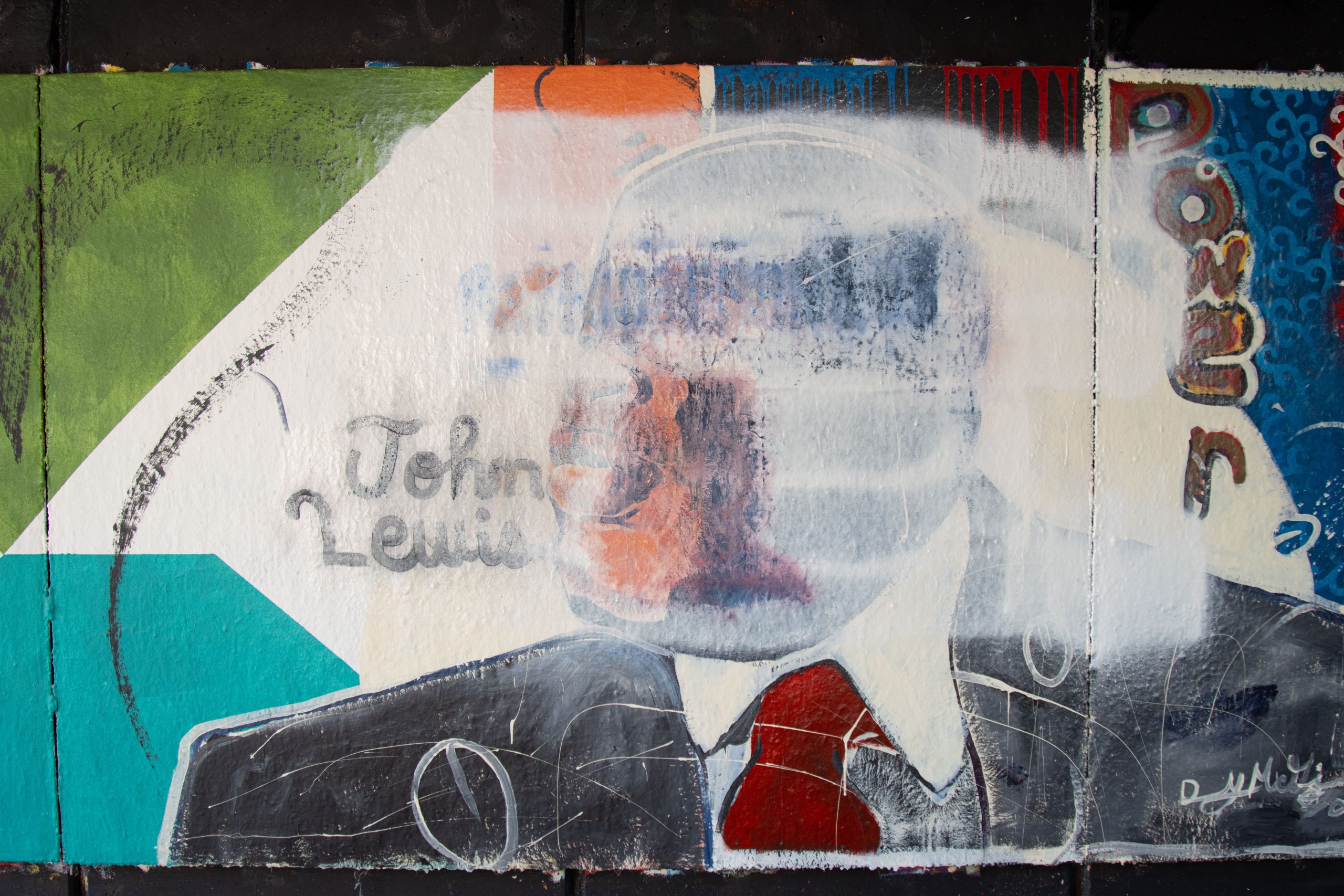 The painting of Rep. John Lewis on the Underpass mural after students cleaned off some of Saturday night’s vandalism. (Photo by Curran Neenan / Student Life)

The spray-paint consisted of a white base layer underneath red and blue messages in support of Patriot Front, a white nationalist hate group the Anti-Defamation League found was responsible for 80% of white supremacist propaganda distribution incidents nationally in 2020.

Chancellor Andrew Martin and three other University administrators condemned the vandalism in a letter to students, faculty and staff Sunday morning.

“This is horrifying and distressing. We’re shocked and saddened by this hateful act on our campus,” the administrators wrote. “Let us say again, so there is absolutely no room for doubt: Washington University stands unequivocally against hate, bigotry, racism, xenophobia and discrimination in any form. There is no place on our campus for these behaviors and this type of harmful action will not be tolerated or ignored.”

The administrators wrote that “a small group of unknown individuals” had vandalized the mural, adding that the University hoped to use cameras in the area of the Underpass to “identify and hold these individuals responsible for their disgraceful actions.” 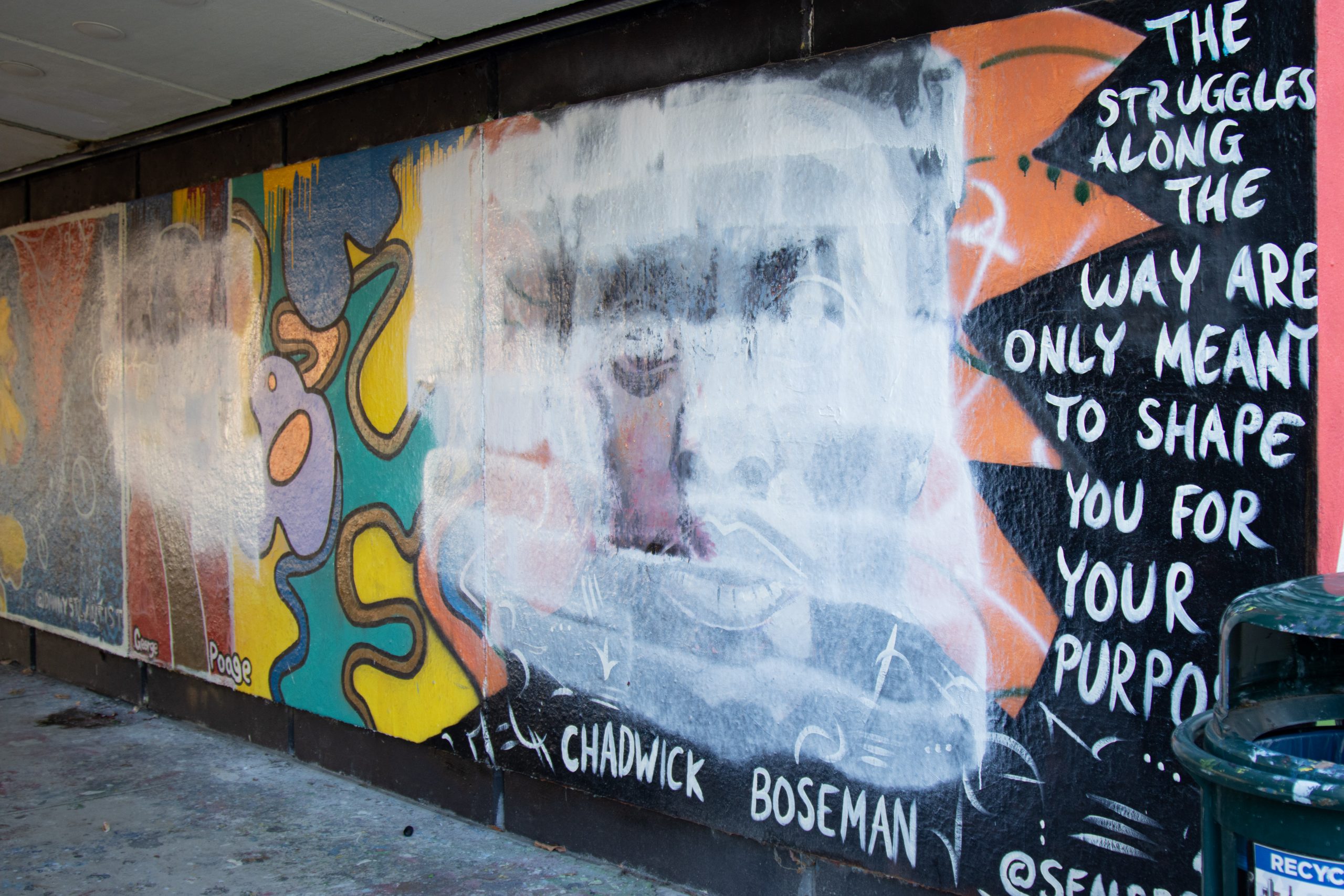 The painting of Chadwick Boseman after students had cleared some of the vandalism. (Photo by Curran Neenan / Student Life)

Flyers for Patriot Front, a splinter group from the organization that organized the 2017 “Unite the Right” rally in Charlottesville, Virginia, had been placed on campus in recent weeks, in a similar manner to their placement at Missouri State University and others earlier this year.

The University was aware of the Patriot Front flyers on campus, Vice Chancellor for Marketing and Communications Julie Flory wrote in an email to Student Life Sunday afternoon. “In each instance we removed the flyers, and [the Washington University Police Department] began an investigation,” she wrote. “WUPD continues to work with its regional and federal law enforcement partners to look into these incidents.”

According to Flory, a student came to the WUPD station on the South 40 just before midnight to report the vandalism and other reports came in within minutes. “WUPD arrived on the scene within several minutes of the first report and gathered evidence, and then students painted over the vandalism,” Flory wrote.

One student told Student Life Sunday that she and others who were walking through the Underpass found the vandalism at around 12:15 a.m. The students returned roughly 20 minutes later with nail polish remover to start cleaning the mural, the student said, adding that she did not see WUPD officers at the Underpass until the group was mid-way through removing the vandalism.

“In total, there was a little over an hour from the time of the first report until students had covered the vandalism,” Flory wrote to Student Life.

Much of the vandalism remained Sunday morning. While the Patriot Front logo and messages had been mostly covered or erased, the white spray-paint over the Black figures still remained.

Flory added that the University was not yet sure of a timeline or process for the restoration of the mural. “We will be working with the artists and our student organizations to replace or repair the artwork in the underpass,” she wrote.

In an Instagram post Sunday, the Center for Diversity and Inclusion’s team wrote they were “infuriated” by the vandalism of the mural. “We are heartbroken to see the destruction of a space meant to celebrate and uplift Black excellence,” the CDI’s post read. “They can try to deface our history, but the legacies and influence of John Lewis, Chadwick Boseman and George Poage will never be covered up. We are so sorry this is one more thing that adds to an already difficult time especially as we move through the end of Finals Week and the beginning of winter break.”

Local artists had painted the mural, titled “The Story That Never Ends,” in the summer of 2020, and the mural had remained there since. In past years the Underpass has featured painted advertisements for student groups and events, but Campus Life has not allowed painting this fall, citing COVID-19 restrictions and insufficient staffing. The mural was a collaborative “freestyle,” De’Joneiro Jones, the project lead, told Student Life last September. “I wanted it to include a lot of history, because I knew in the height of where we were…with the racial tension and all of the things going on in the world—the political climate, the socio-political ills of society—I thought it would be appropriate to add words into the artwork, and also incorporate images of Black [people], [especially] dealing with a lot of St. Louis history,” he said. 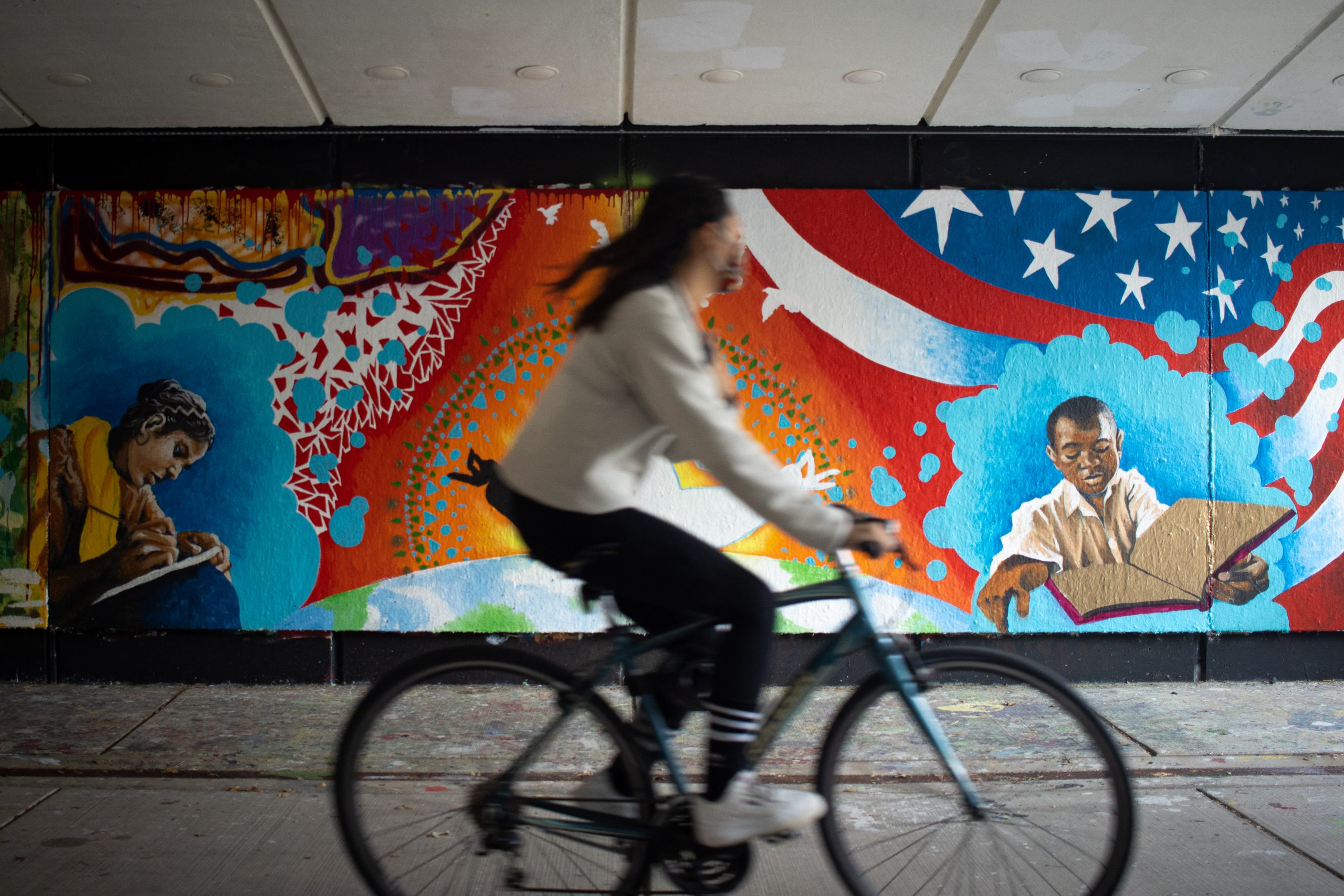 A student bicycles past the original mural on the Underpass during the fall 2020 semester. (Photo by Curran Neenan / Student Life)

The University administrators wrote that the mural “has been a source of pride and inspiration” for the University community. “We will not let this act of cowardice deter us from celebrating our rich cultural histories, especially the outstanding contributions of people who have led the way toward greater equity and understanding,” they wrote.