Some frustrated with SU funding ahead of elections

Students expressed frustrations with Student Union’s allocation of funding ahead of fall elections this week, though Wednesday’s resolution of a miscommunication alleviated some concerns regarding Treasury’s Nov. 9 decision to reallocate fall WILD funding for the spring.

The frustrations come as SU fall elections open today and as SU continues an overhaul of its financial system, with the most significant change in the student group funding process moving from budget allocation to flat and rolling appeals-based funding. 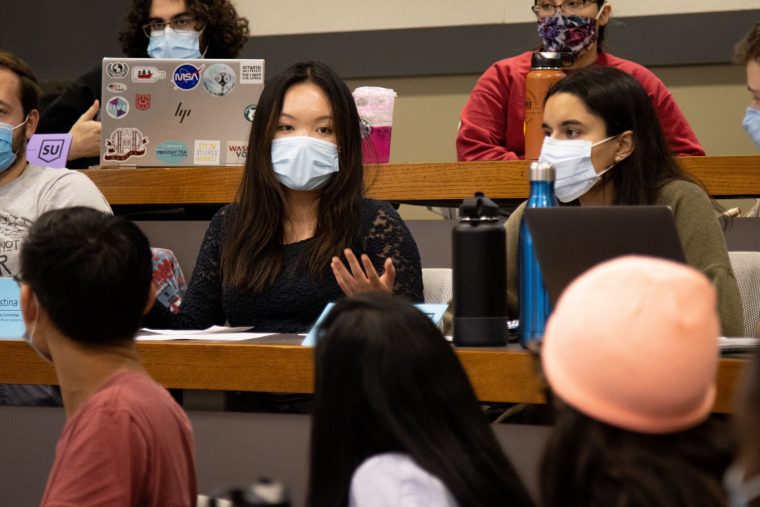 “We, the student groups signed on to this statement, have seen, experienced and/or recognized the consequences of significant flaws in the financial structure of Student Union, particularly in how it allocates funding to student groups,” the submission reads. “As SU exists today, one person (the Vice President of Finance) is able to review all student group appeals under $1,000 without oversight, opening the door for personal bias and discriminatory practices to influence who receives funding, how much, and when.”

Garil told Student Life in an interview that the motivation behind the statement and why she thinks so many student groups are signing on is that one individual should not hold unilateral power.

“It’s the unilateral power to make those decisions without contest,” Garil said. “There’s no way to appeal the appeal, in a sense. So I truly believe that deep down it is a systematic issue, regardless of if we’ve seen elements of discrimination.”

Vice President of Finance senior Fadel Alkilani told Student Life in an interview that he did not believe that the VP of Finance held too much power in deciding the appeals under $1,000, adding that he wanted students to come to him to address specific appeal decisions.

“If anyone has any issues… I would love if you gave me a specific example, because I don’t want to be biased,” Alkilani said. “I want to be as fair as possible with my funding decisions, and I run my funding decisions by financial leadership very often, especially if I’m iffy about them. And you know, these things are always murky, because it’s always a judgment call when you’re funding something.”

Garil went on to detail a specific example that motivated her to draft this statement. HLC was planning a Pride Shabbat dinner in partnership with multiple other groups on campus. Since the appeals submission was at the beginning of October and it was only a couple of weeks before the program would take place, HLC decided to submit an appeal under $1,000 at $980. When the appeal was rejected, Garil found that the explanation was “very vague” and insufficient.

Explaining some of his appeals decision-making process, Alkilani said there are multiple aspects of the appeals review process.

Both Garil and Alkilani said there should be checks and balances for the VP of Finance.

“If there’s at least a mechanism where, say, the executive board is able to hear appeals that are being contested. That’s at least one way that’s better than the current system,” Garil said.

“I think that there are possible checks and balances that need to be implemented,” Alkilani said. “I don’t think that necessarily we need to have a committee of people processing under- $1,000 appeals. That’s not feasible.”

Speaker of the Treasury senior Bryan Peltier echoed Alkilani’s claim that the logistics of the appeals process precludes Treasury from addressing every under- $1,000 appeal.

“Do I agree that yes, better decisions can be made the more people you put on something? Yes, but there’s also a logistical factor you have to consider with getting decisions back to groups in a timely manner,” Peltier said. “And it’s just the combination of those logistical issues and trying to get decisions back to student groups as fast as possible. I don’t think it’s a perfect system, but I think as of right now, it’s probably the best system that we have.”

In addition to the concerns raised regarding the student group appeals process, Uncle Joe’s Peer Counseling and Resource Center and EST released a joint statement on Monday condemning the reallocation of fall WILD funds to unprecedented levels for spring WILD, stating that the funds should have been used to support the Student Union Mental Health Fund. Both Uncle Joe’s and SU Treasury released statements Wednesday addressing the “miscommunication” between student groups.

“The mental health fund was brought up as an erroneous example of something that could potentially go underfunded if the student group appeals account runs out of money before the end of the school year,” the Treasury statement reads.

At the Nov. 9 Treasury meeting, a Treasury representative had said that “Last year we discussed how WILD was an example of something we would spend a ton of money on and we would sometimes run out of money for other things, especially, in that case, it was the Student [Union] Mental Health Fund, stuff like that.” Alkilani told Student Life in an interview that the mental health fund has never run out of money and it currently has available funds.

“As far as I know, though communication with [the Office for Student Success] has been a bit spotty, as far as I know it is operational, it has not run out of money,” Alkilani said. “So I think the central assumption of this, which is that the mental health fund is not being funded, is inaccurate.”

In a statement to Student Life, Angstreich and Swenson wrote that upon reading the article in Student Life last week about the WILD funding reallocation, they were frustrated reading about Treasury representatives discussing whether the money could be spent elsewhere, particularly the Student Union Mental Health Fund, and wrote to SU to understand the situation.

“We emailed members of the Executive Student Union Board with our thoughts and specifically asked them about the quote from the previous Student Life article,” Angstreich and Swenson wrote. “However, the response we received was confusing and did not clarify any of our questions about the mental health fund. It also did not dispute the quote we had sent. We sent a follow-up asking why the mental health fund was not being prioritized and received no response.”

Members of Uncle Joe’s and Treasury met Wednesday to clarify the situation.

Despite the initial misunderstanding, members of both SU and Uncle Joe’s agreed that the University has failed to provide adequate mental health resources for students.

“Maybe Student Union’s budget from the University should be reduced in order for the University to fund for [the mental health fund],” Alkilani said. “But the problem here isn’t Student Union. It’s Habif’s job and the University’s job to allocate to Habif the amount of money needed to support the student body when it comes to these things.”

“If the University is refusing to step up, should we provide help to students even if it is not our responsibility? For Joe’s, the answer has always been ‘yes,’” Angstreich wrote in a statement to Student Life. “That’s why our counselors take calls at 3 a.m., go through 100+ hours of training and regularly sacrifice their own time to help our community.”