Mayor Jones critiques Democratic messaging and calls on WU to do more for St. Louis during visit to campus 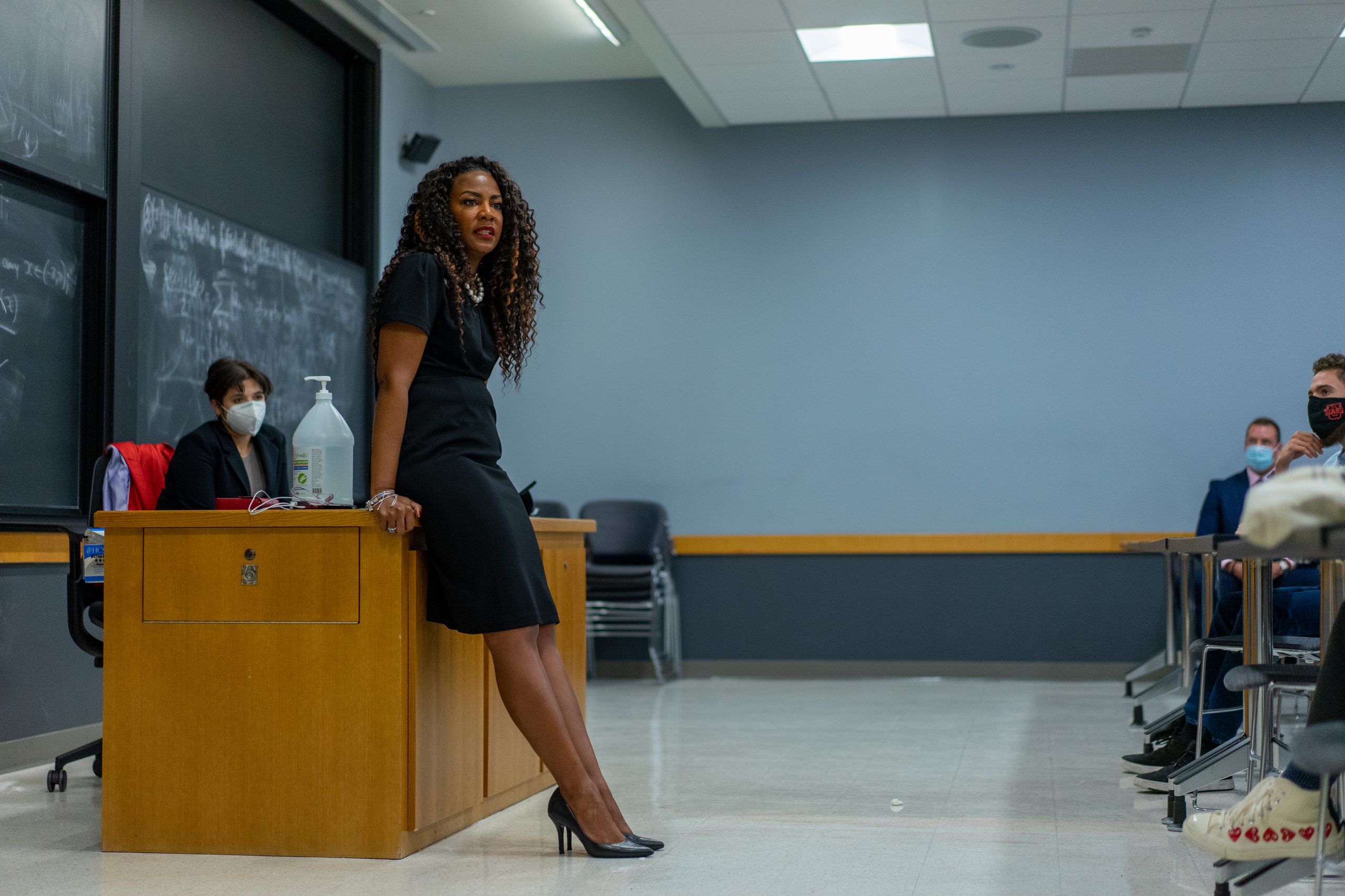 St. Louis Mayor Tishaura Jones defended progressive Democrats, called on Washington University to improve its relationship with the region and discussed her plans to reimagine public safety at a conversation with around 50 students in Simon Hall Monday night.

The event, Jones’ first on campus since becoming mayor in April, was organized by the College Democrats, the Roosevelt Network and the Pre-Law Society. Jones began by giving a brief overview of what her first six months as mayor have looked like, but she quickly shifted to a more open discussion as she took questions from students.

A number of students asked Jones about how the Democratic party can improve its messaging in the wake of disappointing results in the New Jersey and Virginia governors’ races last week. Jones said that Democrats have been losing ground recently because they focus on policy while Republicans talk about values.

“In my recent election, we talked about values — the value that you should be able to succeed regardless of your skin color, your zip code or any identity because those are things that speak right to the heart,” Jones said. “In Virginia… we just said ‘vote for us and we’re not Trump.’”

One student asked Jones what she thought of progressives being blamed for the electoral losses of more moderate Democrats.

“I think it’s b******t,” she replied. “When establishment Democrats come and suck all the air out of the room, it hurts progressives,” she said. “When you stay in the middle and try to appease everyone, it never works.”

Jones also touched on some of the progressive policies that she has been working to implement during the last six months. Public safety has been a major priority for Jones, who is currently seeking a new chief for the city’s historically racist and dysfunctional police department, in addition to rethinking what type of professionals respond to which calls.

A partnership with Washington University’s Brown School of Social Work aimed at hiring and training 28 new social workers for the city is a key component of Jones’ plan to “civilianize” public safety. However, Jones said that the University still has work to do in order to be a better neighbor.

“WashU and SLU [St. Louis University] own a lot of property and don’t pay taxes on it,” Jones said. “Even [the University’s] property outside of their campus isn’t taxed. It would be nice if they paid PILOTs [Payment In Lieu Of Taxes] or used their influence for better.”

“I agree with Mayor Jones that WashU really needs to be more of a leader in our community, and there aren’t enough programs that really address these issues,” Linam said.

Vice Chancellor for Marketing and Communications Julie Flory did not specifically comment on the possibility of the University adopting a PILOT program, but highlighted the University’s economic impact on the region in a statement to Student Life Wednesday evening.

“In 2020, the university employed more than 16,900 people, supported more than 47,000 jobs in the St. Louis region, directly contributed $2.9 billion to the local economy, and attracted over $865 million in research funding, mostly coming from outside the region,” she wrote. “We continue to work closely with our regional partners to identify investments and initiatives that are beneficial to the region.”

Jones also shared details of her experience as the first Black woman to serve as mayor of St. Louis, describing how she faces “extra scrutiny” in her role relative to her white male counterparts.

For sophomore Kamila Redd, Jones’ discussion of her identity was a major highlight of the event.

“[I] was really interested in seeing the way in which I could see myself in her as a Black woman,” she said. “I think representation is very important, so I definitely wanted to come out and hear her speak and support her in any way I could.”

President of the College Democrats junior Emma Singh said that she was satisfied with how the event got students to engage more with the St. Louis community, adding that her organization is currently working to bring representative Cori Bush to campus this year.

“I think it’s really important that WashU students get to know the greater community that they live and work in,” she said. “We had a great opportunity to bring [Mayor Jones] here, so we didn’t hesitate at that chance.”

This article was updated to include a comment from Vice Chancellor for Marketing and Communications Julie Flory at 11:01 p.m. Wednesday night