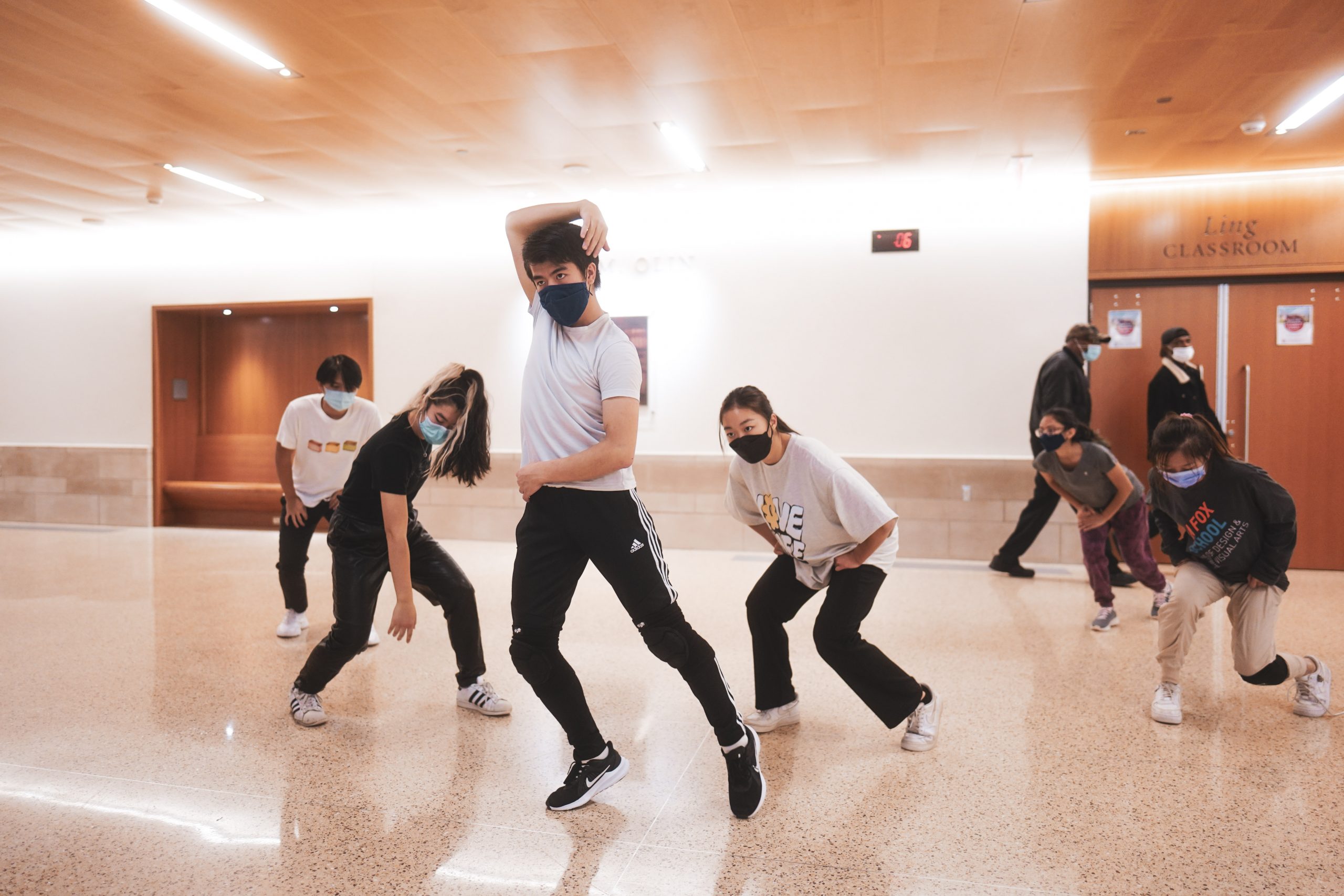 As in-person activities have resumed this semester, some dance groups have struggled to find practice spaces on campus. Many group members have cited difficulties with the reservation process as well as frustration with the lack of suitable practice facilities.

Most groups require open spaces that are large enough to accommodate COVID-19 safety precautions, as well as rooms with mirrors so that performers can see themselves as they practice. As these spaces have become increasingly difficult to access, groups have innovated to find alternative spaces and solutions to the shortage, but the process has still posed challenges while groups prepare for cultural shows and other showcases.

Senior Alice Na, co-president of Korean pop dance group PL4Y, said that some PL4Y cohorts have resorted to practicing in the basement of Mallinckrodt Center at night.

“The windows, we just use at night as mirrors. Though they’re not really mirrors, that’s how desperate we are for mirrored spaces,” Na said, noting that it is “odd” to do this because the basement is a public space not designated for dance practices.

Associate Professor of Drama and Chair of the PAD Pannill Camp acknowledged that such a situation is not ideal, explaining that the varied needs of different groups can pose scheduling issues.

“When different groups are rehearsing at the same time, when we have shows in production that need to rehearse, when we have student-led thesis projects that are performance-based, you can get at certain times a lack of space, and not everyone can get the time and the spaces that they want,” Camp said.

Moreover, because there are limits on the number of hours groups can reserve in the Women’s Building Olin Dance Studio each week, cohorts within the groups may also be competing for practice space.

“We’re trying to balance within a club, or between other clubs too who use this room so that it’s more fair, but it’s just really hard sometimes because it’s a lot of different schedules to coordinate,” said sophomore Rachel Tian, a choreographer for the Lunar New Year Festival (LNYF).

“It’s a little tough to find the right times and then even then you’re competing for spaces within the production,” said senior Nayana Vuppala, a co-captain of WashU Garba.

According to co-president of WashU Urban & Hip-Hop Union (WUHHU) senior Annika Pan, the University’s decision to convert the Gargoyle venue space in Mallinckrodt Center to offices and classrooms during the 2019-2020 school year has continued to be a major factor in the space shortage.

Following the loss of the Gargoyle, the PAD established a program to share its facilities, including the Olin Dance Studios in the Women’s Building, with student groups who can not find practice space.

Under this system, clubs can book up to six hours per week in the Women’s Building Olin Dance Studios with a maximum of two hours per day. “The intent of that is to make sure that we’re giving many different groups a chance to use the spaces,” Camp said. He explained that before the six hour limitation, some groups used to book up to eight hours at a time, use what they need, and release the rest, but this tactic “essentially monopolizes the space and doesn’t give other groups enough time to do the work that they need to do.”

Meanwhile, there is no advanced notice needed to book standard-level Campus Life spaces like rooms in the DUC or Mudd MPR, according to Interim Executive Director for Campus Life Phyllis Jackson. “It just becomes what’s available,” Jackson said, noting that the department has fulfilled last-minute requests before.

In an effort to promote easier access to performance spaces, a new maintenance and cleaning fee covered by SU ensures that student groups will no longer have to pay to rent spaces.

“SU has a contract with the Performing Arts Department and with other departments at WashU to ensure that spaces are available to student groups without charging student group accounts. Student Union is charged on behalf of student groups and sets aside a pot in the general budget to do so,” SU Vice President of Finance senior Fadel Alkilani wrote in an email to Student Life.

“[The removal of fees] has taken a lot of stress off our backs,” co-president of WUHHU senior Emma Rich said. “While it does still pose an issue with booking in general, at least you don’t have to worry about being able to afford it.”

However, some groups have reported confusion about the cost of reserving campus spaces. “They change the prices to rent spaces, or what space you have to pay for and what spaces are available to you,” Na said, adding that her group, for example, has gotten “mixed messaging” about whether or not it is free to rent the South 40 Dance Studio.

Assistant Director of Fitness and Wellness in the Office of Recreation Meghann Feely confirmed in an email to Student Life that Student Union-recognized dance groups are not charged to use the South 40 Dance Studio unless they damage the space. But, because this policy was presented just this summer by Student Union, Feely acknowledged that some dance group leaders may not be aware of it yet.

One new space that student groups have found helpful is the Asian Multicultural Council (AMC) Suite, which was made available for AMC-affiliated groups in September after the University installed high-efficiency particulate absorbing (HEPA) air purification filters. While the suite has historically been used for a “mild amount” of dance practices, AMC co-president junior Mandy Feenstra said that due to the space shortage, 70% to 75% of the suite’s open-booking hours are now used by performance groups.

Some PL4Y groups can utilize the AMC Suite, but it is smaller than a typical dance studio, meaning “only a few dancers can [fit] in this space, so only a few dances qualify to use this space in the first place,” Na said.

The difficulty finding practice space remains an issue for many groups, heightened by upcoming festivals and shows.

WashU Garba is preparing for the annual Diwali show on Nov. 5 and 6 at Edison Theatre. The group typically practices in McMillian Café, where the space’s different shape relative to most performance spaces means that the group’s formations are very different than they would normally be, according to Vuppala. She added that, more generally, limited space means that groups are “limited on choreography” and have a harder time accommodating spacing for formations.

WUHHU is also preparing for its annual fall showcase, scheduled for Nov. 20 in the DUC. “We’ve had to double up on some rehearsals in the upcoming weeks just to make the timing work because we’re so limited in how much time we have before our performance,” Rich said.

Beyond physical space constraints, dance group leaders have also experienced issues with the communication from the booking system.

“There’s no alert system for if your spot has been taken,” Rich said. “For example, we were physically in a space at the beginning of a rehearsal at the beginning of the semester, and a faculty member came in and was like, ‘I reserved the space,’ and nobody had notified us. We had to leave and practice with no mirrors in the garage because we had nowhere else to go.”

“Mudd is sometimes booked—it says it’s booked on the website—but then you walk outside and no one’s in there. We’re always really angry because if no one’s in there, we want to practice in there because it’s a nice space,” Tian said. “I just want to see better organization with making sure how to reserve places.”

Jackson said that there is no policy that requires advanced notice for cancellations. “We assume once it’s booked that it’s being used. There’s no penalty for cancellation. We do hope that people cancel their reservations if they decide not to use it, so that we can better utilize our space,” she said. “With them being self-serve, we don’t contact or reach out to make sure they’re still using the space. However, if there’s some process or something that someone would like to suggest, I’m open to hearing it. I don’t know if we can implement it, but I’m happy to hear it.”

When dance groups are able to book spaces, some have had to bring their own speakers. “We used to be able to use the internal sound systems. Now, on top of not knowing necessarily every week where we’re going to rehearse, we have to make sure someone is bringing a speaker so that we can even hear our music as opposed to being able to just use the system,” Rich said.

There are currently no plans to expand access to the Women’s Building Olin Dance Studios. “We are adding faculty. Our department is growing,” Camp said. “It’s a balancing act. We don’t want to be selfish about the resources we have. But we have to make sure we’re managing them responsibly, and making sure that the department’s mission is preserved.”

Nor are there plans to build more studios, Camp said, but some dance group leaders hope to see a better utilization of campus space.

“We don’t really have a designated student group space for dance anymore. It’s completely just things that we’re borrowing to use for our uses, but it’s not for us,” Pan said, suggesting putting mirrors into the Lopata Multipurpose Room so that there would be two spaces (Lopata MPR and Mudd MPR) that could function this way.

Na suggested allowing the basement of Rutledge Hall to be rented out. “I know Rutledge, because I was [a resident advisor] there last year, Rutledge basement used to be a dance studio, so they have a mirrored wall. It’s not a space that you can rent because it’s a study room now for the residents of JKL.”

The third floor of Wrighton Hall used to be the traditional practice space for some Lunar New Year Festival acts, Feenstra said, but the space is no longer usable due to study cubbies. “It would be really nice if the University could take those study cubbies down because literally no one’s ever there, and it hogs all that space that traditional performance groups really need,” Feenstra said.

Feenstra said that the problem was urgent because the current issues with practice space will start to affect student performance and morale.

“Because cultural performance plays such a vital role in our diverse campus community—it brings together students from all regional and educational backgrounds—I honestly think it’s super important that this problem gets figured out soon because it can irreversibly affect the quality of the performance and the morale of the Asian student community, particularly as shows like Diwali approach,” Feenstra said.

Editor’s Note: Amanda Young is a member of AMC but did not conduct the interview with Co-President of AMC Mandy Feenstra. Orli Sheffey and Grace Kennard contributed reporting.