Students protest for socioeconomic diversity at an event in spring 2019. (Photo by Grace Bruton/Student Life)

Washington University’s shift to need-blind admissions, announced Monday morning, follows a relatively recent push to increase socioeconomic diversity after years of prioritizing academic prestige and turning away hundreds of qualified applicants who would have been admitted if not for a lack of dedicated funding.

Many of the University’s peer institutions went need-blind prior to 2000, including Duke, Amherst, Columbia and Cornell. In 2003, Brown University became the last Ivy League school to implement need-blind admissions. Others have made the switch more recently, including Vanderbilt in 2010 and Johns Hopkins in 2018. Need-blind admissions have not been historically limited to the schools with the largest endowments; Rice University, which has an endowment of $6 billion (as compared to schools like Harvard with an endowment of $42 billion or Princeton with $26 billion), stopped considering financial need in 1912.

However, despite calls from students and others to make a similar change, Washington University administrators refused. “It’s not our highest priority,” Wrighton said at an annual tuition forum in 2012, when the University’s endowment was just over $5 billion. “We’re committed to quality and diversity, but we also have to be able to afford [this diversity].” 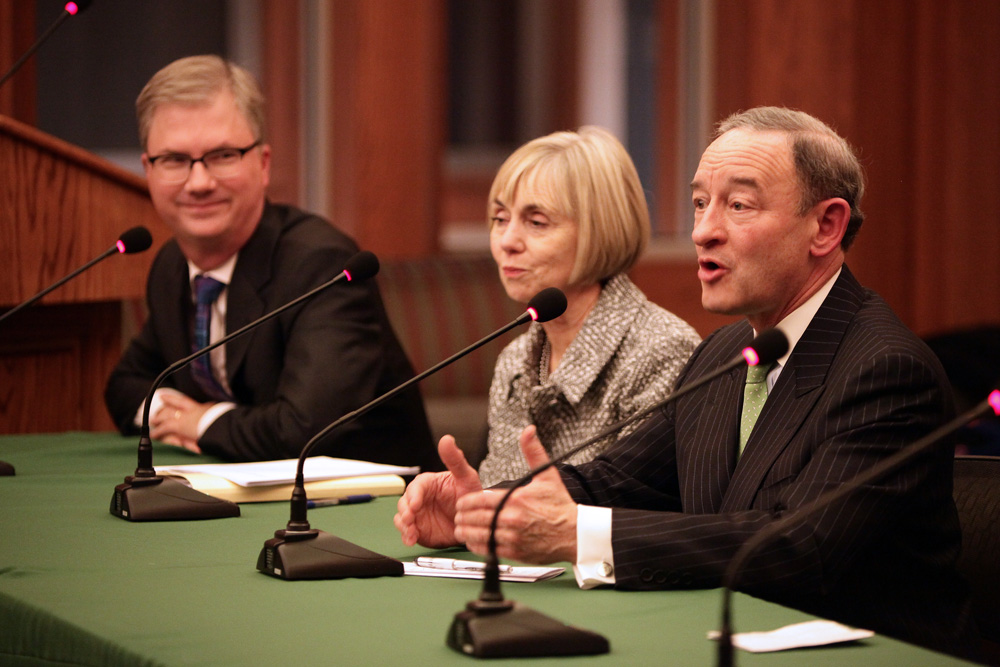 In 2014, as the endowment approached $7 billion, then-Vice Chancellor for Admissions John Berg explained that under the need-aware admissions policy, the Office of Admissions would send Student Financial Services a list of proposed incoming freshmen each year. If the total demonstrated financial need was greater than the funds set aside by the University for financial aid, SFS would send the list back to the Office of Admissions for reevaluation.

“It’s certainly on the order of hundreds of students who we know would have been great Washington University students and that we weren’t able to admit because we’d exhausted our financial aid budget,” current Chancellor Andrew Martin told Student Life this week.

Over the years, many individual students and student groups voiced concerns over the policy.

“Admissions literally has to pick out students they were going to accept and not accept them because of them being low-income,” then-President of Washington University for Undergraduate Socioeconomic Diversity Lauren Chase said in 2014. “That is discrimination by a different name.”

At a panel discussing tuition in October 2014, former Provost Holden Thorp said that administrators did not regret having prioritized the University’s academic status and recognition over increased socioeconomic diversity.

“If they hadn’t done that, nobody in this room would be sitting here right now,” he said. “We’re not going to apologize for that.”

In 2015, a New York Times article revealed Washington University to be “the least economically diverse top college,” with only six percent of current students Pell-eligible. The designation led to increased scrutiny of the University’s recruitment and admission policies alongside widespread calls for improvement.

In 2018, Wrighton said that becoming need-blind would require an additional $1 billion of endowment funding focused toward financial aid. “I don’t see it to be fiscally responsible or possible for us to move to what people call ‘need-blind,’” he said. “I think that’s an ideal that we can work towards.” A significant majority of the billion dollars would be invested to provide for future financial aid funding, while just 4.5% would go directly toward financial aid, Thorp said.

But without dedicating enough funding to ensure that students would be accepted regardless of need, recruitment efforts could only go so far; the University continued to turn away a certain number of students each year for solely financial reasons.

Administrators justified this decision by pointing out that they wanted to ensure students who were accepted were given the full support they needed, as opposed to a small number of peer institutions that practiced need-blind admissions but did not commit to meeting 100% of demonstrated need.

In 2019, newly-appointed Chancellor Andrew Martin said that it was the University’s “moral responsibility to become a need-blind institution as quickly as possible.”

However, he added that if the University were to switch to need-blind admissions too soon, they would not be able to offer adequate aid to all admitted students. “[That] would put us in a situation [where] we would have to offer some students financial aid packages which I don’t think are acceptable,” he said. “Those [students] would incur very significant loans and family burdens which couldn’t be met and those students ultimately wouldn’t matriculate.”

The financial backing Martin was waiting for finally arrived in 2021, with the endowment pool’s unprecedented $5.7 billion growth. This time, student calls for a move to need-blind admissions were finally answered, supported by a billion dollar investment in financial aid under the new “Gateway to Success” program. Beginning with the class of 2026, the Office of Admissions will not explicitly take into account the financial status of applicants from the United States. (Only five universities nationwide offer need-blind admissions to international students — and the number has decreased over the past decade, with both Dartmouth and Cornell announcing moves from need-blind to need-aware for international students in late 2015 and early 2016 respectively.)

In The Source, Martin celebrated the announcement while acknowledging it was not a panacea for the University’s lack of socioeconomic diversity. “Admitting the best students from all socioeconomic backgrounds is obviously the first step,” he said. “Making sure they have the support and resources to succeed once they’re here is also critical.”

Wrighton: Need-blind ‘an ideal that we can work towards’