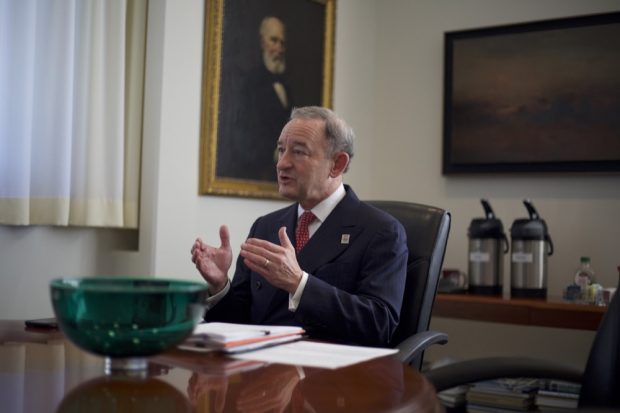 Wrighton, who left the role of chancellor in 2019 after 24 years, has since served as chancellor emeritus and as the James and Mary Wertsch Distinguished University Professor of Chemistry. He was Washington University’s highest-paid employee during the year ending in June 2020, reporting over $2.8 million in compensation according to the University’s form 990, and will take a sabbatical while leading GWU, Washington University announced in The Source Friday afternoon.

“I am pleased to have the opportunity to help George Washington University prepare for a new era of growth in quality and impact,” Wrighton told The Source. He will take over at GWU once the current president, Thomas LeBlanc, steps down amid widespread faculty dissatisfaction, the GW Hatchet reported.

Wrighton came to Washington University from the Massachusetts Institute of Technology in 1995 and oversaw an extended period of expansion. “I am very proud of the progress that has been made at Washington University during my years as chancellor,” he said in an October 2017 statement announcing his retirement. “Much has been accomplished in partnership with a long list of strong, effective leaders across the University. Together, we have accomplished something extraordinary in the past 22 years.”

Wrighton was named the campaign chairman for Better Together’s plan to merge St. Louis city and county in January 2019, but the plan fizzled out that spring following significant pushback and the conviction of county executive Steve Stenger on federal corruption charges.

Now, Wrighton will seek to bridge a transition at GWU. “Celebrating the 200th anniversary of its founding this year, George Washington University already has a long and outstanding record of accomplishment in scholarship, education, patient care and research,” he told The Source. “It is an honor to participate in launching its third century of contributions to society.”