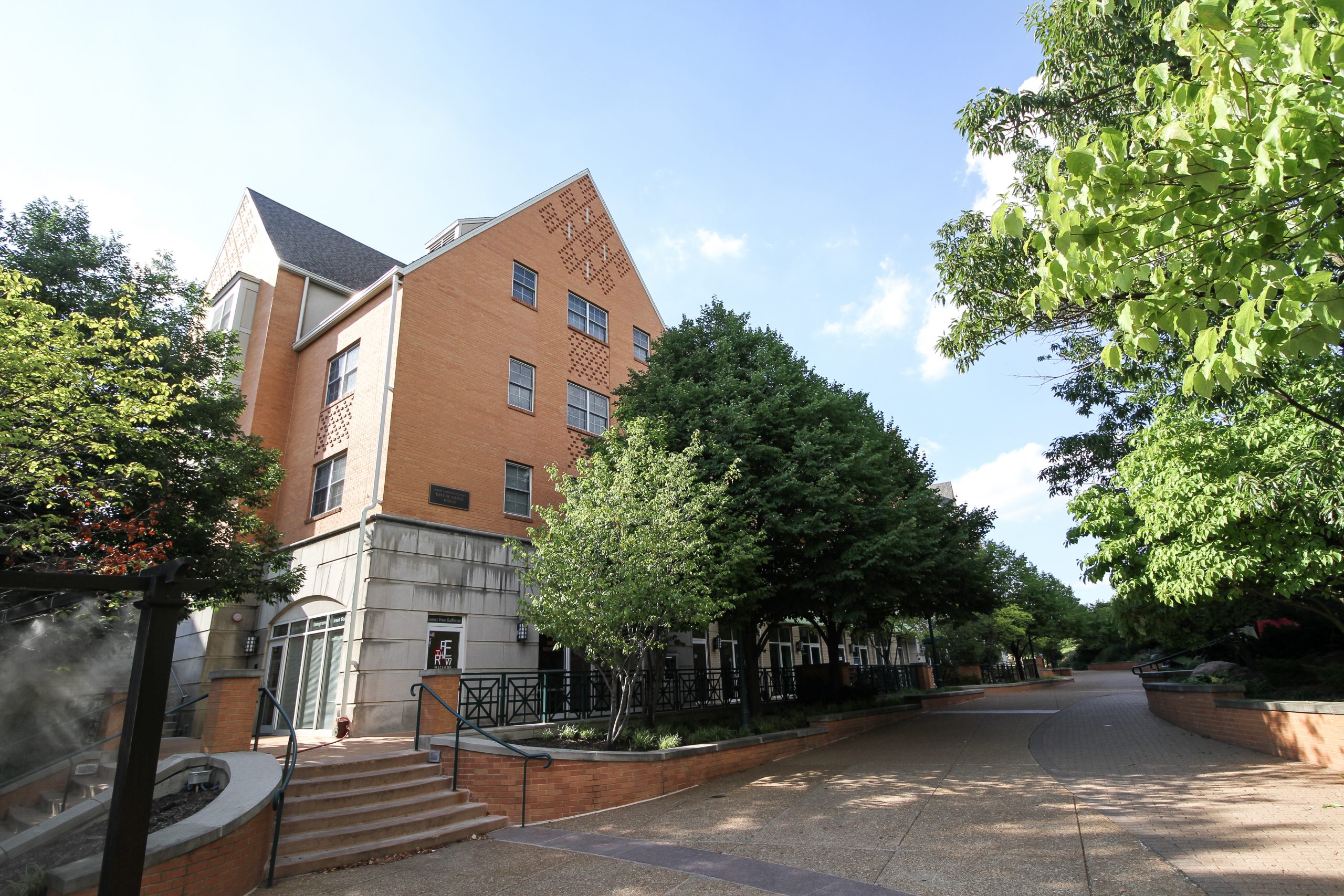 Gregg House on the South 40 in 2019. Gregg was one of multiple buildings to which sophomores who had selected to live in Wheeler or Myers House were reassigned this week. (Photo by Grace Bruton | Student Life)

The Office of Residential Life changed 2021-2022 academic year housing assignments for roughly 150 Washington University sophomores this week, leading to a mix of surprise, disappointment and frustration as scores of students learned of their new living arrangements for the coming year.

Sophomores said they were shocked and saddened by the housing assignment changes that relocated many of them from the South 40 to the Northside. With COVID-19 conditions improving, many sophomores had been looking forward to living on the South 40 and having a more robust college experience than their first year.

The reassignments come as the University welcomes a larger freshmen class than anticipated and expects less need for quarantine and isolation housing in the fall semester.

While the University located quarantine and isolation housing in Dardick House, Nemerov House and the Millbrook Apartments during the 2020-2021 academic year, the University has designated only Millbrook 1 and 4 as quarantine and isolation housing for the coming year, Residential Life’s Director of Housing Operations Will Andrews said in an email to Student Life. The increased availability of housing on the Northside allowed Residential Life to move some sophomores from the South 40 to open space for the large number of freshmen.

The Class of 2025 is “unexpectedly large” due to a stronger yield than expected, Assistant Vice Provost and Director of Admissions Emily Almas wrote in a statement to Student Life.

“The admission models we have relied on in the past to help predict the number of admitted students who would accept our admission offer and decide to enroll at Wash. U. were not as effective given the pandemic,” Almas wrote.

Andrews expressed optimism about the incoming class. “We’re fortunate that so many of our admitted students have chosen to come to Wash. U. and we’re making appropriate adjustments to accommodate them,” he said. “We greatly appreciate the flexibility and understanding of our student community—especially our sophomores, who have been through a lot in the past year.”

Andrews said Residential Life now anticipates having 90% housing density for the fall, a slight increase from the 85% the University had initially announced for the fall semester. “We believe the need for [quarantine and isolation housing at Millbrook] will be very low,” he said.

The reassignments affected sophomores who had selected in March to live in Myers House and the first three floors of Wheeler House, Andrews said. “Rather than move a few sophomores from many buildings on the South 40, we decided to take two communities on the South 40 that had been assigned to sophomores and convert them to housing for first-year students,” he said.

Most students were reassigned to Millbrook on the Northside, but some reported being switched to Gregg, Zetcher, Nemerov or Lien Houses, or the Village. Millbrook had previously been reserved for quarantine and isolation housing and was not an option for students during the housing selection process.

The changes moved some students from singles to doubles and others from the South 40 to the typically more expensive Northside. Residential Life said it kept housing rates the same across the board for those moved.

Sophomore Kaitlin Shepard said that her housing group had decided to live on the South 40 to get a more normal college experience, even though they weighed living at a cheaper off-campus apartment. Now that her housing group was reassigned from Wheeler to the Millbrook apartments, she said she was “mad” that she has to pay the same price for a housing assignment she had no say in choosing.

“It’s annoying because we’re paying the same amount of money as the South 40,” Shepard said. “That’s what we’re expecting to pay, but it’s not what we signed up to pay for. It’s not the dorm that we chose.”

Sophomore Kayleigh Crow, who was relocated from Wheeler to Millbrook, said that she was “really sad” and “upset” when she learned she could no longer live on the South 40.

“I feel like the South 40 is just a quintessential part of the Wash. U. experience,” Crow said. “One of the most important parts to me was that there were floor-wide common rooms in addition to common rooms in our suites, and I was really looking forward to being friends with all my floor mates.”

Sophomore Maya Phelps was disappointed to discover not only that she “wouldn’t ever experience a normal year on the 40 at all,” but that she had been switched from a single in Wheeler to a double in Millbrook.

While Phelps initially thought she was getting an upgrade with a kitchen and dining area for the same price, she was surprised to learn that she would be sharing a room with her suitemate. Phelps had an Umrath House double and a bathroom to herself over the last academic year, since only single-occupancy rooms were available during the pandemic, so she had already been “nervous [about] just having a suite and sharing bathroom with three other people.”

“To know, ‘oh, we have one bathroom, and I’m sharing the room with someone’ is definitely an adjustment that I wasn’t necessarily expecting,” Phelps said. “But I really like my suitemate and we’ll be okay.”

Sophomore Cindy Wang, while still living on the South 40, was sad that she was moved from Wheeler to Zetcher, since her new room is smaller and she will no longer be in the same building as some of her close friends.

“I just feel like it’s kind of unfair that we spent so much time and effort choosing Wheeler. And now we have to move out of the way for all of the incoming class,” Wang said. “There’s obviously room now in other places that they probably could have lived in and [ResLife] didn’t have to go through the trouble of moving and relocating everyone who was living there.”

In addition to coming to terms with different housing locations, sophomores are also grappling with the possibility of new suitemates. While Andrews said Residential Life kept existing housing groups together, several students in housing groups of three to four reported being assigned to suites with up to seven beds, leading them to wonder if their suites included additional housing groups.

After receiving the email from Residential Life, affected students checked their housing portals to see the names of their roommates or suitemates only to find that housing assignments would be posted July 1. Previously, the portal had listed roommates or suitemates, but now students only know the location of their housing assignment from the email.

“We are making updates to the portals and assignments will be available to view on July 1,” Andrews said.

Shepard and Crow are remaining in singles with their housing groups of four, but discovered that their assigned suites have seven rooms. With the housing portal closed, they do not know if they have three more suitemates.

Students in similar situations have turned to GroupMe chats, where they have sent their newly assigned suite numbers and asked if others were assigned to remaining rooms in the same suite.

“People are like, ‘I have three more suitemates and I don’t know who they are—are any of you them?” Phelps said.

Andrews said Residential Life waited until this week to inform students of the changes because the University was not sure how many changes they would need to make. “The months of May and June are traditionally periods of time when we might experience ‘summer melt,’ which is

when an enrolled student is either admitted from another school’s wait list or for some other reason decides to enroll elsewhere,” he said. “This year, we thought we might see higher than usual melt, but by the end of June we could see that we would have a high number of students enrolling. We had to wait until the enrollment picture became clear before knowing what changes would be needed.”

Still, sophomores were frustrated by the lack of clarity and communication from Residential Life. They described immense confusion upon receiving the reassignment email.

“I just saw a lot of confusion of ‘why is this happening?’ ‘I don’t even know where Millbrook is,’ ‘I don’t know who my suitemates are now,’ ‘How do we look at things in the housing portal, like when is it going to be open?’ ‘Who do we even call to figure things out?’” Phelps said.

Shepard found the lack of notice especially frustrating. “They did this without any warning, not even a courtesy email,” she said. “Just out of the blue, they were like ‘‘this is happening: deal with it.’”

“They were probably getting a lot of angry calls,” Crow said.

Andrews said the Residential Life office remains open for calls Monday through Friday from 8:30 a.m. to 5 p.m. and added that students can also email [email protected]

Students have faced issues with Residential Life throughout the pandemic, from the termination of resident advisor contracts in March without providing prorated refunds for food or housing to the cancelation of the housing contracts for juniors and seniors last summer, leaving them little time to find alternative housing.

Crow said that she thinks Residential Life “could have gone about [the changes] in a better way.”

“I don’t know how they chose the people to transfer…I feel like there could be some people who would have been more okay with being in Millbrook, maybe they would have even preferred it, so I feel like they should have given us the option to switch,” she said. “I understand if they have too many first-years—that’s kind of non-negotiable for them to be on the South 40—so I feel like they could have gone through a second housing process.”

Despite their concerns and frustration, Crow, Shepard, Wang and Phelps do not plan to cancel their housing contracts with only two months until the fall semester.

“We did not consider moving just because we didn’t think there would be a place to move to,” Phelps said. “Only until August 1st to find an apartment this late is extremely hard. So I definitely think that if Wash. U. had poor planning and didn’t know that they couldn’t hold that many sophomores on the 40 that they should have given people who got moved much more time to find a new place to live, if that’s the route that someone wants to take.”

Shepard said that after multiple frustrating experiences with Residential Life, she does not plan to live on campus after sophomore year.

“We were thinking about living on again junior year, but this kind of cemented that this will be our last year on Wash. U.’s campus,” Shepard said.

Student Life editor-in-chief Matthew Friedman contributed reporting. If you have more information regarding these changes, or any other news tips you think the Student Life team should have, you can email [email protected]. You can also submit an opinion piece by emailing [email protected]

Other recent news from Student Life: