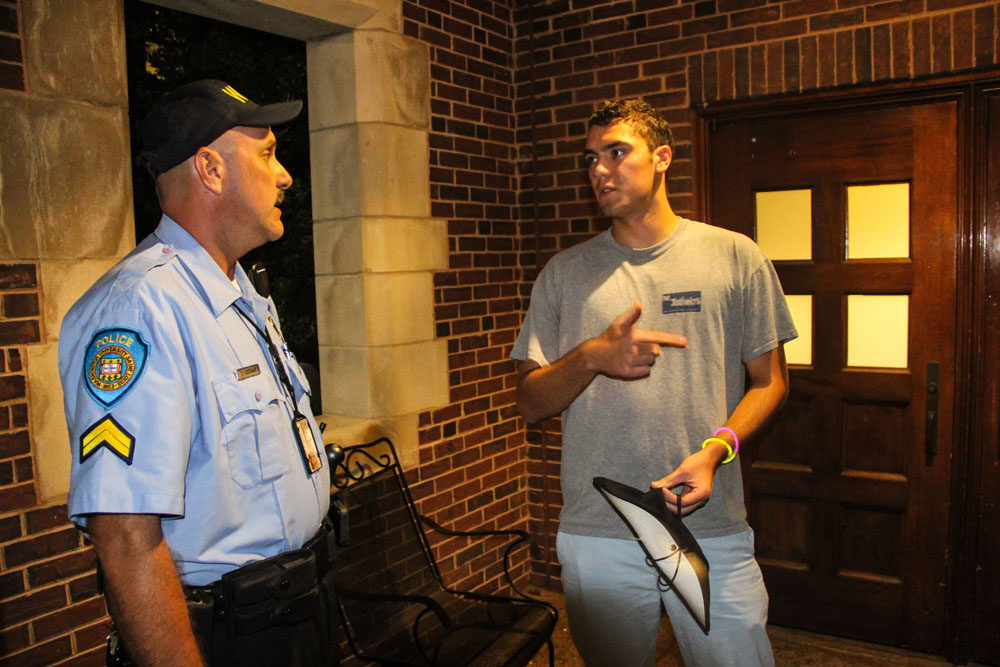 In this 2014 file photo, WUPD officer Dave Goodwin speaks with a student. The University is reducing WUPD’s role in responding to mental health crises starting in the fall semester. (Photo by Stephen Huber | Student Life)

The changes, which the University announced last month in The Source, will reduce the role WUPD plays in responding to mental health crises starting in the fall semester.

Except in the event of a “safety concern,” WUPD officers will not be dispatched to a call deemed a mental health emergency, Executive Vice Chancellor for Civic Affairs and Strategic Planning Hank Webber said, though it remains unclear what constitutes a “safety concern.”

“We are working to determine this,” Webber wrote in a follow-up email to Student Life. “It is an issue facing all police forces across the country that are moving toward having mental health professionals respond to calls.”

The mental health professionals will be housed in an independent, community mental health agency, Webber said, with most of the funding for the changes going to that entity.

This funding strategy is different from the Committee’s recommendation, which asked for funds to be earmarked for WUPD for specific mental health services, a recommendation that left some students unsatisfied. Webber noted that some of these changes are simple reallocations of funds while others will cause an increase in the overall University budget.

“Some of the recommendations are fairly inexpensive and will come from reallocations within the Police Department,” Webber said. “The increased mental health coverage will be an increase in the University budget. That is not something that can be covered by a reallocation.”

Though the University plans for these changes to reduce contact between WUPD and students during mental health emergencies, administrators are also working to bolster trust between community members and WUPD. Campus engagements during orientation for incoming students in the fall will allow for greater “informal contact” between students and WUPD officers, Webber said.

In addition to the orientation engagements planned, Webber acknowledged that targeted trust building is needed for specific communities on campus. The survey indicated that of students identifying as African American, Latino/Hispanic, Asian and two or more races, 50%, 55%, 60% and 43%, respectively, said they were comfortable with their interactions with WUPD while 68% of white students said they were comfortable or very comfortable with their WUPD interactions.

“I think we need to recognize that confidence in police and police relations in America everywhere are influenced by race in a significant way,” Webber said.

Webber also called the LGBTQ community members’ trust in the police the “most distressing” part of the survey. Seventy-six percent of students identifying as heterosexual said they were comfortable in interactions with WUPD, while 21% and 44% of bisexual and gay/lesbian students, respectively, reported comfort with those interactions.

“I think we have a lot of work to do,” Webber said. “I think we have some work to do in the police force to be more sensitive to this community… but I also think this is a broader issue that the University needs to work on.”

To ensure that students that are most uncomfortable with police presence are involved in this process, Webber said the University will coordinate targeted outreach toward specific student groups and their leadership. Additionally, the University will form a standing committee to continue the work of the Public Safety Committee. While the standing committee will be representative of the University community, Webber said, there likely will be a “greater representation” of the groups where relations are more strained.

Junior Tennyson Holmes, a member of the Public Safety Committee, said he thinks the changes are a step in the right direction because WUPD should not be asked to handle mental health situations, given their training and expertise.

“I think if you talked to WUPD officers themselves, while they always want to be protectors of our community, they also didn’t sign up to be mental health professionals and counselors; like that’s not their job, the job is to investigate,” Holmes said.

Moreover, Holmes noted that narrowing the scope of WUPD’s role on campus will also encourage reluctant students to report crises. Together with the on-call mental health professionals, the community will greatly benefit, he said.

“It’s really difficult to want to report a mental health crisis… when your first responder might be an officer who you might not feel comfortable with and who might not be trained to handle whatever situation you’re in. So the community is getting a huge benefit; the fact that there’s going to be mental health professionals on call 24/7 for when crises do occur,” Holmes said.

Junior Emily Angstreich, incoming co-director of Uncle Joe’s Peer Counseling and Resource Center, echoed Holmes’ hope that more students will be inclined to call given the changes recommended by the Committee.

“I think students will be more willing to potentially respond to calls or make those calls if they’re feeling unsafe or a friend might be more comfortable calling for another person,” Angstreich said. “So that’s the more positive change that I am envisioning.”

Holmes noted that community awareness of these changes is important so all students feel comfortable asking for help when it is needed. It will increase the number of people using the service, thus more people will benefit from these changes, Holmes said.

As part of the implementation of these changes, the WUPD dispatch team will also receive additional training. Both Angstreich and Holmes said more training is not a permanent solution to address the problems in responding to mental health crises.

“It’s great that WUPD will have more training,” Angstreich said. “However, something that I’ve seen a lot in my research on this topic is that, while training is certainly not harmful—it’s definitely more helpful—it does not replace the abilities of someone who’s really been trained in this.”

Holmes agreed. “Mental health crises don’t fall under the scope of police work, no matter how much training they get,” he said. “That was a problem too… for so long we’ve always thought if we could just give them more training, more training then the problem would solve itself over time. But the issue is… it’s never going to substitute for a degree in social work or a degree in counseling.”

Want to share your reactions on the changes to WUPD’s role in responding to mental health crises or other aspects of the implementation of the Public Safety Committee’s recommendations? Email [email protected] You can also submit an opinion piece by emailing [email protected]

Other Student Life stories about mental health on campus:

‘During times of adversity we become like social magnets’: How the pandemic has affected WU extroverts and introverts differently

‘People are just being left in the cracks’: Activists organize mental health advocacy initiative to push for better resources