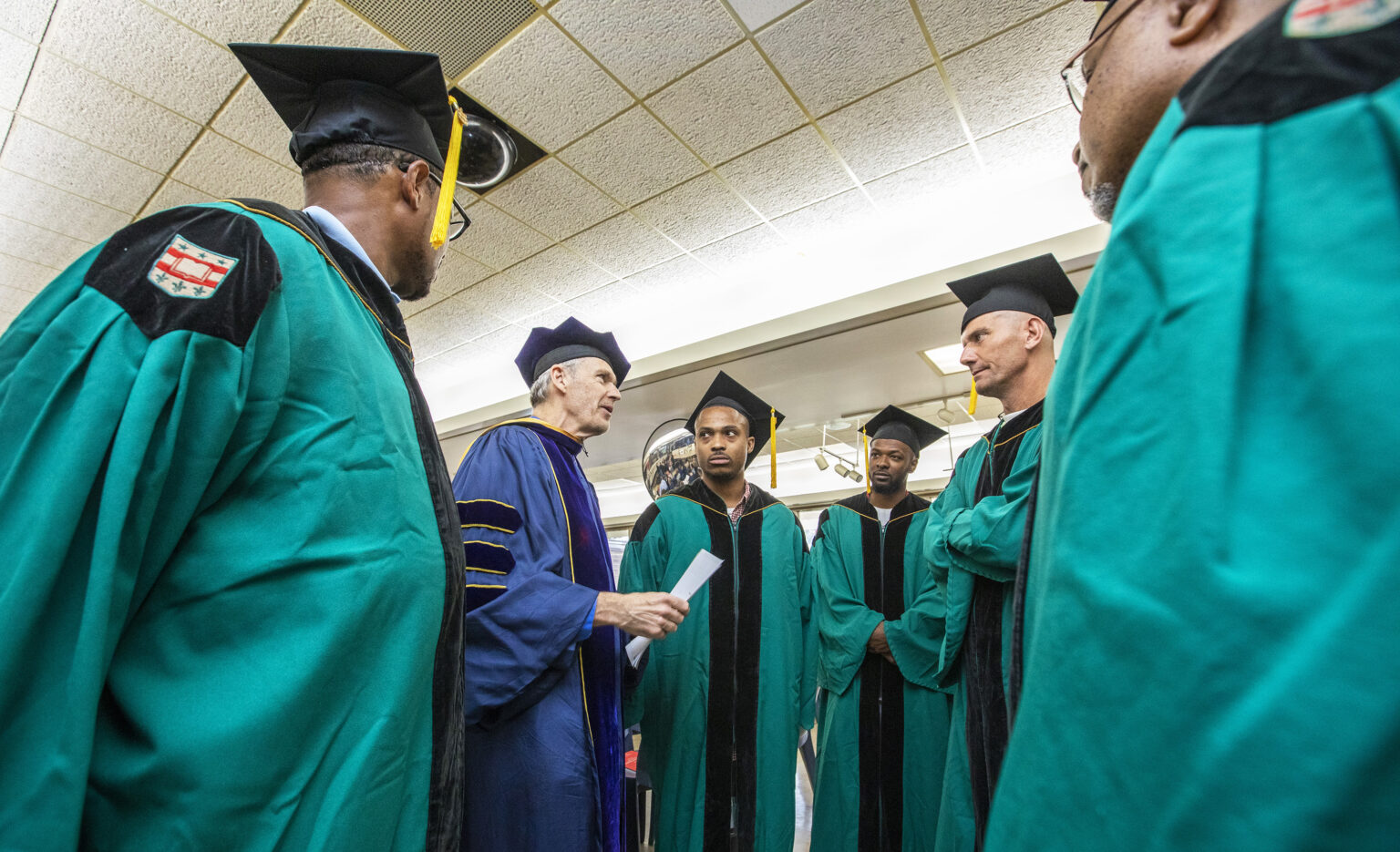 Courtesy of The Source

Washington University’s Prison Education Project (PEP) has been awarded a $980,000 grant from the Andrew W. Mellon Foundation after its proposal for improving prison education was selected as the winner of the foundation’s “Future of Higher Learning in Prison” initiative.

The two-year grant will be critical to the PEP’s goal of improving and expanding its operations. The funds will be allocated primarily toward expanding the PEP to a women’s prison in central Missouri, upgrading educational technology and advancing its post-incarceration reentry program.

“I was absolutely thrilled, super excited and a little bit surprised,” Barbara Baumgartner, associate director of the PEP and co-principal investigator of the grant, said. “It was an enormous amount of money. It was a real thrill to see the Prison Education Project being recognized for this award, and we’re super excited about it.”

The PEP, founded in 2014, provides a liberal arts education to people incarcerated at Missouri Eastern Correctional Center (MECC), a medium-security men’s prison located about 30 miles from St. Louis in Pacific, Missouri. In addition to the 16 courses currently offered by the program, the PEP offers two degrees: an Associate in Arts (Liberal Arts) and a Bachelor of Science in Integrated Studies.

The grant comes after the University cut the program’s funding by 25% in 2020, according to PEP Program Coordinator Natasha Narayanan. The University administration attributed the decrease in funding to COVID-19, but many involved with the PEP were disappointed with the decision.

“It was frustrating for me personally,” Narayanan said. “We don’t have a lot of padding in our budget to begin with. Everything in our budget is allocated to paying people for their time and the work that they do. It’s not like we’re having holiday parties, or paying for international plane tickets or any sort of things that you can live without.”

The budget cuts proved particularly harmful to the program’s ability to maintain the same variety of courses available to students at MECC.

According to Robert Henke, PEP director and co-principal investigator of the grant, University funding for the program has since returned to pre-pandemic levels. However, although funding was eventually restored, the PEP has faced additional challenges during the pandemic.

After in-person instruction was suspended in March 2020, the technology that facilitates virtual learning has posed significant barriers to instructors and students alike. All PEP students have access to their own tablets, provided by the state of Missouri in partnership with for-profit service provider JPay. However, due to security concerns, the Missouri Department of Corrections (DOC) prohibits use of the internet as well as direct communication between students via technology.

As a result, PEP staff and students needed to find a way to interact and engage with class materials without features like Zoom or discussion boards. This has been accomplished primarily through email, but according to Baumgartner, these interactions can take days and are a poor substitute for synchronous instruction. Moreover, students are not permitted to initiate emails—they can only respond to them.

“We’ve just been able to communicate via email, which is even more impersonal than us being on this video chat together,” said junior Kennedy Young, who has been involved with the PEP since 2018. “And their classes are all asynchronous now, so it’s been really, really hard maintaining that student-teacher-tutor relationship via email because we can’t see each other. We can’t have organic conversations like we would in person.”

Despite the setbacks, the PEP’s digitization has allowed the program to identify the complications of its current Learning Management System (LMS), Lantern, in a way it might not have otherwise. Specific limitations of the LMS include an inability to manage large files or videos longer than five minutes.

“I think it allowed us to write a grant that recognizes the limitations of the current technology that is delivering a lot of the higher educational content in prison right now,” Baumgartner said. “The experience with Lantern kind of allowed us to see what needed to be improved.”

Henke also named a technology proposal as a possible reason for winning the grant.

“We made the case to Mellon that we were kind of at the cutting edge of what is possible with the current LMS,” Henke said. “It was clear that they were interested in the possibilities of technology to generally improve college in prison programs.”

Program directors are excited about the development of a more robust LMS under the Mellon grant. According to Baumgartner, the funding will provide the PEP with the resources to upgrade the capacities of its current LMS, such as enabling instructors to upload TED Talks and films.

Henke and Baumgartner are also hopeful that the grant will allow the PEP to expand LMS access to incarcerated individuals outside of the program. This includes funding a computer room within MECC where, with the help of an upgraded LMS, students would have access to a variety of educational resources including GED supplemental coursework, Khan Academy, MIT OpenCourseWare and the Gutenberg Library.

According to Henke, the PEP’s expansion of its LMS is heavily tied to its plans to begin operating at Women’s Eastern Reception, a diagnostic and correctional center in Vandalia, MO, this fall.

“The thing I want to stress is that there’s a dual focus,” said Henke. “It’s for our students and our future students at Vandalia, and then ultimately at the end of two years we want it to be open source. We want a prison program in upstate New York to be able to use it.”

Vandalia is almost 100 miles away from St. Louis, making daily on-site instruction unfeasible; the Mellon grant, however, can fund the technology necessary to overcome this distance. PEP leaders envision biweekly visits from a University instructor, during which the instructor would spend the entire day there, supplemented by the improved LMS. Ideally, the remote portion would involve Zoom, but it has yet to be determined whether the DOC will allow it, Henke said.

“Since we started this program in 2014, it’s been my dream to expand to a women’s prison,” Baumgartner said, who is also a professor of Women, Gender and Sexuality Studies at the University. “We can use the technology to supplement that in person teaching, because again, we’re very committed to being in person with our students.”

Henke also emphasized the importance of the grant in funding its reentry program.

“We’ve always realized we can’t have a serious college in prison program without a reentry program,” Henke said.

The grant allows the PEP to hire two new employees: a reentry case manager and a PEP alumni coordinator, Baumgartner said. Prior to the grant, the reentry program, launched in 2019, relied on volunteers. The new staff will help people released from MECC with tasks like job preparation, getting a driver’s license or finding housing.

“A lot of prison education programs like to talk about how education is transformative, and I agree with that statement,” Narayanan said. “But I think it’s important to recognize that it’s the students themselves who are the agents of change. I think if we claim to be a student-centered program, we can’t just focus on education and classes and offering degrees inside, because we need to support students holistically as they leverage that education after they’re released.”

As someone who has experienced life in the carceral system first-hand, the alumni coordinator will play an especially important role in the reentry program, Baumgartner said.

“We have a community that we’re building for our alum that can share their experiences,” she said. “They are really good at helping each other and giving advice to each other, so it’s really important that we are providing the space and opportunity for them to get together, because it can be very isolating.”

The grant will also provide the PEP with the funds to initiate four new interdisciplinary courses in the humanities. It is currently looking to the Brown School of Social Work or the Sam Fox School of Visual Arts and Design. Henke said a course with the School of Law was also a possibility, although nothing is set in stone yet.

While the Mellon grant offers opportunities to expand the PEP, the future of these developments and of the program itself is reliant on continued funding, either from other donors or from the University.

“It’s an experimental thing. It’s continuance after the two years is going to depend on donor/foundation money, said Henke. “I think it’s important that the University keep realizing, year after year, that this is a really important program to support.”