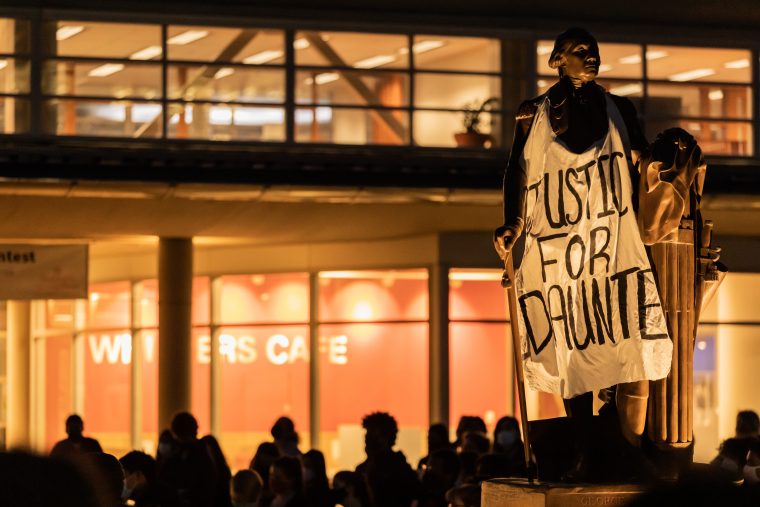 Protestors march past the George Washington statue, which is covered with a “Justice for Daunte” banner.

Several speakers at the event called for the abolition of the Washington University Police Department (WUPD) and the upheaval of systems with colonialist undertones. Demonstrators also hung signs signaling support for the Black Lives Matter movement and a banner that read “Justice for Daunte” on the George Washington statue.

The protest comes as the University plans the implementation of recommendations from the Public Safety Committee report, which student committee members and other activists have described as insufficient.

Students and community members opened the demonstration on the East End steps with speeches and poems before marching to the statue outside of Olin Library. As they marched, demonstrators chanted in unison: “Justice for Daunte Wright, Adam Toledo too, police don’t keep us safe, we do, we do.”

After more speeches at the statue, an organizer called for people with umbrellas to walk toward the figure of Washington. For several minutes, dozens of students opened their umbrellas to protect the anonymity of the students placing posters and the “Justice for Daunte” banner on the statue. Last fall, current alumna Sabrina Sayed spray painted “colonizer” on the same Washington statue, resulting in a $1,516 fine from the Office of Student Conduct and Community Standards.

When asked about potential repercussions for students involved in the action at the statue on Friday, Vice Chancellor for Marketing and Communications Julie Hail Flory told Student Life in an email that the University does not comment on student conduct matters.

Protesters also used chalk to write messages on the base of the statue and the walkways beside it, where photos of both Wright with his son and Toledo were placed in the flower bed. Phrases including “Enough!,” “Trans lives matter” and “Abolish WUPD” lined the pavement. A protester crossed out the name “John M. Olin” on the side of Olin Library and wrote “War Profiteer” in its place.

Before the demonstration at the Washington statue, junior Sabrina Spence delivered a piece called “Tell me where the danger is” about her experience being pulled over by WUPD while driving with a permit on campus this April. She spoke about being perceived as a threat on campus and in this country due to the color of her skin, and she described the danger that police pose to Black individuals.

“Tell me who the danger is,” Spence said. “Because from where I stand, I don’t see any. I am looking to the horizon line and I see nothing but angry faces staring back at me. And God has given us the unalienable right to anger in times where anger is due. And danger and anger can be confused because they are similar, I understand, but danger, danger, I do not see unless you are afraid of what mountains can be moved.”

Following Spence, freshman Jebron Perkins delivered a poem called “Intro to Criminal Law,” partly inspired by his recently watching the show “How to Get Away with Murder.”

“All you need to get away with murder is a badge,” Perkins said. “The first murder I remember was Trayvon [Martin]. And that day I prayed to the god of mercy, so that we would be delivered from this new evil. Little did I know there is no new evil. This is the same evil that made our ancestors jump from ships because freedom in death was better than bondage. This is the same evil that killed Emmett the same bullet that shot Martin. This is the root of the rotten tree we call America.”

“I no longer pray to the god of mercy, I take to the streets,” Perkins said. “We will destroy this cursed system you made. America, this is your hour of reckoning. Abolition now.”

Perkins’ call for police abolition was a constant theme of the night, and several students noted how systems of policing have been marred by racism since their foundation.

Sophomore Ahmed Motiwala delivered a poem entitled “How do you kill a colonizer?” Motiwala called for people to recognize and kill the “colonizer” in their own mind that might be holding them back from recognizing the extent of the injustices in the country.

“You do not reform toxic parasites that slowly infect and poison their host,” Motiwala said toward the end of the piece. “You do not rehabilitate plagues that spread and pollute a people, that make a land barren. Most of all, you do not reform a colonizer’s institution that is succeeding in what it was intended to do.”

Graduate student Lorenzo Lones said that Motiwala’s speech struck a chord with him, particularly the note about colonizers.

Lones suggested that police training has been built in a way that inherently harms Black and brown individuals. “Essentially, the badge gives them a license to kill and react,” he said. “And it’s unfortunate because obviously the people they are killing are disproportionately people of color.”

After Motiwala spoke, the crowd marched to the Washington statue. Perkins said he was inspired by the sight of so many people holding up their umbrellas to protect the activists’ anonymity.

“A big part of why Abolish WUPD is a thing and abolish the police in general is because police officers protect property, they don’t protect people,” Perkins said. “Putting up your umbrella to protect someone doing something that the police are going to try to punish them for, not rightfully, of course, but doing that, it’s a tangible piece of solidarity.”

The night also included calls for people to continue action-based work outside of joining demonstrations in the wake of specific tragedies. 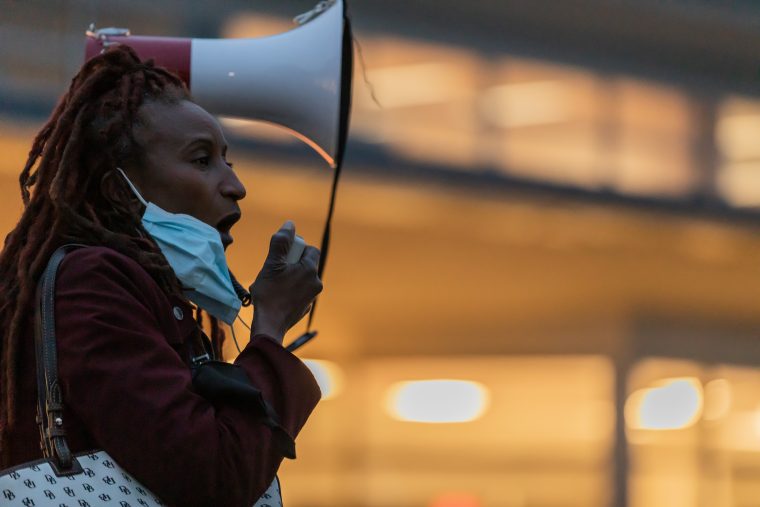 Carla Wright, who came second to Claire McCaskill in the Democratic primary for Senate in 2018, spoke about the need for Black individuals to make their voices heard at the polls.

“We complain when we wait for these verdicts and we see these cops getting off, and we’re sad about it,” Wright said. “But we can do things about that. We got to hit them with the pen and paper. Family, we’ve got to vote.”

After the protest, Perkins noted the need for unrelenting pressure to combat the injustices that Black individuals face in the United States.

“Maintaining that pressure, even when there’s not a specific case to be mad about, is what creates change,” Perkins said. “If every time it happens, we get mad and then we get complacent, there will never be any change, because they know that they can just wait this out. One of the most important things is proving that we cannot wait it out. You either get with it, or you’ll get run over by it.”

Editor’s note: Junior Sabrina Spence is the social media editor for Student Life. She was not involved in the production or the promotion of this article.