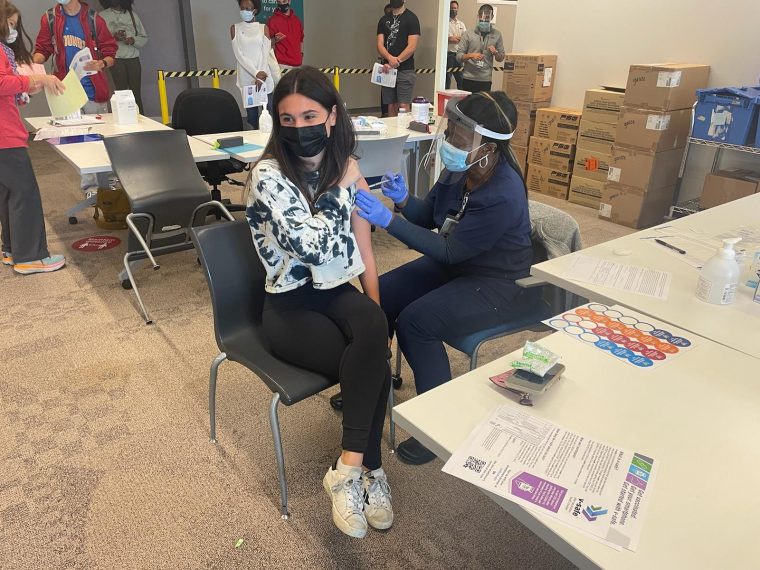 Washington University School of Medicine resumed its vaccination clinic on Friday, April. 16 with a new supply of Pfizer vaccines following a pause in distribution of the Johnson & Johnson vaccine to all students, faculty, staff and family members of faculty or staff.

“I think that the community has been very understanding and is really flexible with switching from J&J to Pfizer,” Wilkins said Friday. “Everybody that was supposed to be here on Tuesday and get J&J has been here today to get Pfizer.”

On the morning of April 13, immediately after the Centers for Disease Control and Prevention recommended halting the rollout of J&J, Aagaard had an emergency phone call with other health experts at the University. In partnership with Barnes-Jewish Center, she requested a redistribution agreement through the state to reroute a supply of the Pfizer vaccine to the University’s vaccination clinic. Within two hours, the request was approved. At 10:13 a.m., the University notified the community of both the cancellation of J&J appointments and the plan to resume the vaccine clinic with the Pfizer vaccine.

“We’ve gotten used to this kind of emergency thing,” Aagaard said. “We’ve had enough experience with this that we know who the right people are to have a conversation with. It was wonderful that the state was so efficient in approving our redistribution, because that can sometimes be a limiting factor.”

Eligible community members who have yet to receive the vaccine are still able to register through the University. As of Friday, the University had received 500 doses of Pfizer, but that number is expected to increase depending on community demand.

“Every week, you make a request for a certain supply of a certain vaccine, and then you find out over the weekend whether that supply has been granted,” Aagaard said. “It’s always a question in terms of trying to figure out each week… how easy will it be for us to give these shots out? Will people show up?”

Despite the challenge of determining the amount of vaccines to request, Wilkins said that no doses have gone to waste since BJC began distributing doses in December.

“We do get a fair share of no shows, but we don’t draw up the vaccine unless there are people here,” Wilkins said. “Towards the end of the day, we slow down what we draw up, so that was what prohibited us from being able to or having to waste doses. We have that luxury with having [a] pharmacy on site, whereas a lot of the other locations don’t have that.”

Another logistical challenge is that while the J&J vaccine only requires one dose, the two doses of the Pfizer vaccine must be administered approximately three weeks apart. With many students already preparing for final exams in the next few weeks, Wilkins said it could pose a challenge for students since the second-dose generally has more severe short-term side effects.

In response, the University is offering four options for scheduling second doses. Although the CDC recommends administering the two doses of Pfizer 21 days apart, Wilkins said that “you can generally do plus or minus a few days.”

“We’ve offered some starting on the 20th day and then we’re going to go until the 26th day,” Wilkins said. “That is really what’s recommended and considered safe at this time.”

While many students agreed that the one dose would have been more convenient, their main concern was scheduling another vaccine appointment after their J&J appointments were canceled.

“I was honestly just worried that I wouldn’t get another vaccine, like they wouldn’t immediately sign me up for another one,” junior Christina Chen said. “But other than that I was fine with [the Pfizer vaccine].”

“It would have been easier to get one dose, but I also think doing it through the school has made it more organized,” graduate student at the Brown School Chloe Lampros-Monroe said. “I had family members who have driven hours to a CVS [to get vaccinated]…I thought I was gonna have to spend hours on websites, but they just rescheduled me quickly. It was cool.”

Although many students were willing to get any of the three vaccines approved by federal health agencies, Jason Han, a chief resident in anesthesiology at Barnes-Jewish Hospital who was volunteering at the clinic, said that he was concerned that the pause on J&J would increase vaccine hesitancy. The recommendation to temporarily stop distribution of J&J came after six out of seven million recipients developed blood clots.

“A lot of people probably aren’t going to be aware of exactly why the vaccines were put on hold and would avoid getting vaccinated because of that,” Han said. “It’s unfortunate; it’s a small population of folks that are involved. But hopefully, they’ll be able to come out with some more evidence and prove that for larger populations, it’s still good.”

However, Wilkins said that for some, the federal health agencies’ decision to pause J&J was reassuring.

“The CDC and FDA are really doing this out of the abundance of caution to make sure that we’re really counting for those people who are vaccine hesitant; because even though [the agencies are] putting a pause on it, they want to make sure that it’s still safe and effective for everyone,” Wilkins said. “And I think that really shows that they’re willing to do that to make sure that everyone has a safe experience.”

“I hope that it’s trust building for people that [federal health agencies] are keeping an eye out and actually taking action in the moment that there could be any type of considered problem with the vaccine, because I know there’s a lot of people out there that are very skeptical or very concerned,” Freeman said. “I think that this shows that they’re really doing their due diligence to monitor what’s going on with everyone.”

Although it was just Freeman’s first day administering the vaccine with the University, she was excited to see a strong turnout on the clinic’s reopening day.

“I am just so happy to see so many people coming out and the relief that people start to feel after they start getting their injections,” Freeman said. “I think it can be a little bit more emotional than some people were prepared for.”