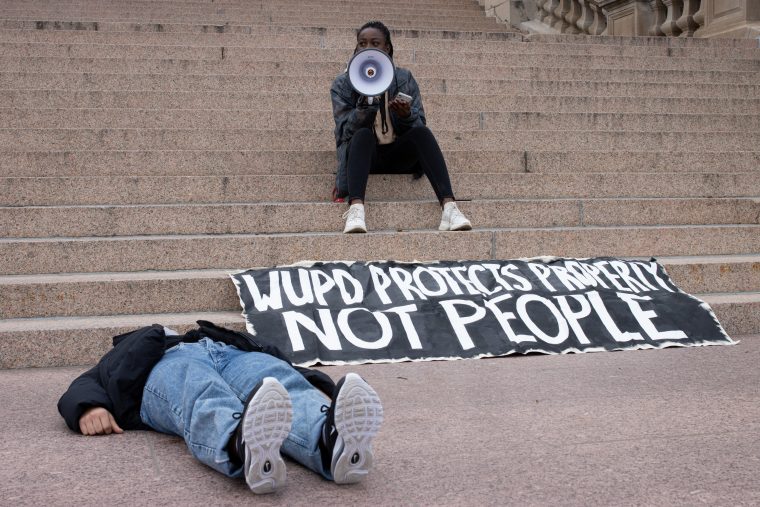 Activists with Wash. U. for Abolition stage a demonstration at the steps of Brookings Hall

A Missouri Senate bill that would restrict acts of protest and expand penalties for blocking traffic, rioting and vandalizing would pose burdens to Washington University student protestors if passed and signed into law.

The bill, Missouri Senate Bill 66, initially provided immunity to people who run over protestors blocking traffic. Although the latest version of the bill, which passed the Judiciary and Civil and Criminal Jurisprudence Committee, Feb. 1, no longer provides that immunity, it holds provisions that some professors and student activists say may limit First Amendment rights. The bill is currently stalled in the Missouri legislature.

SB 66 amends current law so that lone protesters who block traffic face a misdemeanor charge, while individuals who join an unlawful assembly face felony charges on the same level as rioting and vandalism of public monuments or structures.

“To think that your right to protest enables you the right to stop traffic and literally stop people’s ability to move about freely in this nation is a gross misunderstanding of our constitutional rights,” Republican State Senator Rick Brattin, who introduced the bill, said in a committee hearing, Jan. 25.

But many say the bill goes too far. Washington University law professor John Inazu, who specializes in First Amendment law, said that protest restrictions in Missouri are already too strenuous and give too much discretion to law enforcement.

“This is a very draconian piece of legislation that is doing far more than it needs to do,” Inazu said. “Law enforcement already doesn’t seem to understand Missouri’s unlawful assembly provision as it’s written.”

Inazu cited law enforcement’s response to protests following the fatal shooting of Michael Brown by a white police officer in Ferguson, Missouri as an example of this misunderstanding of the law.

“There were federal court proceedings where federal judges were asked questions on how law enforcement was enforcing the unlawful assembly provisions, and they were not able to answer under oath what those provisions are,” Inazu said. “I have asked law enforcement officials, ‘how do you know when an assembly is unlawful?’ They’ve told me, ‘when the assembly is peaceable we allow it, and when it turns non-peaceable, we shut it down.’ But that’s not what the statute says.”

The current statute requires that at least seven people agree to violate the law using force or violence in order for law enforcement to shut down the assembly. Inazu said that aspect of the statute that requires a collective agreement to use force or violence is too ambiguous.

“If you’re the law enforcement official observing a protest, at what point do you determine that seven people have made an agreement?” Inazu said. “It’s got to be something more than just a sense of the crowd…You have to have some evidence of an agreement and you can’t bypass that requirement to declare an assembly unlawful.”

SB 66 adds even more ambiguity to the statute, according to Inazu. For example, the unlawful traffic interference provision refers to “a person.”

“That seems to suggest that a single person doing this could constitute unlawful assembly, which doesn’t make any sense to me,” Inazu said.

Junior Matias Mayesh, the president of College Republicans, however, argued that there need to be specific penalties for certain acts of protest.

“People depend on the roadways and are just going about their lives,” Mayesh said. “You have to weigh different concerns, but we can’t just have no disincentive to doing so. The same goes with vandalism: There has to be some sort of mechanism to discourage that.”

Mayesh said that “officers really are well within their rights to arrest a lot more people, and it just seems like [SB 66 is] giving more specificity to what exactly people could be arrested for.”

SB 66 also prevents municipalities from decreasing their law enforcement budgets by more than 12% relative to the proposed budgets of other departments in the municipality; chief law enforcement officers could, under the new legislation, initiate action for injunctive relief to protect their budgets.

“The point is to provide that level of ambiguity in areas [relating to the rights of protestors], while on the other end provide very strict guidelines around say…protecting police budgets,” Smemo said. “Comparing those two, I think would be quite revealing as to what is being explicitly protected or implicitly protected.”

Smemo also pointed to the racialized history of protests in Missouri leading up to SB 66.

“[The bill] is part of a much longer history of trying to prevent protests from otherwise disrupting the gears of a rather thoroughly racialized political economy,” Smemo said. “The protest movements that we’ve seen in St. Louis historically have been organized around winning freedom.”

Sophomore Maurice Wang, a member of Wash. U. for Abolition, added that people often protest when they do not otherwise have a voice in a situation, whether it be a result of voter suppression or a cause on campus.

Kelsey Wulfkuhle, the social media chair of the Washington University Graduate and Undergraduate Workers Union (WUGWU), said that SB 66 would certainly impact student protesters. She said that students who protest have a lot to lose, from scholarships to residential life housing to work study.

Wulfkuhle described the University’s response to student demonstrations as “not great,” citing the arrest of eight individuals by WUPD in 2019 after occupying then Chancellor-elect Andrew Martin’s office during a “Fight for $15” protest.

One of those eight individuals, civil rights activist Reverend Darryl Gray, has publicly spoken out against SB 66, calling it “a deliberate, frontal attack on democracy, freedom of speech and assembly.”

Wulfkuhle and Wang both said that the bill is a direct reaction to the police killing of George Floyd and the Black Lives Matter protests that followed. They argued that SB 66 targets and would disproportionately harm communities of color.

“Frankly, this bill is in direct response to Black Lives Matter protests [and] defund/abolish the police protests, and in that they’re kind of putting in a safeguard against if we were to defund the police, making it literally impossible to do so in the state of Missouri,” Wulfkuhle said.

Wang described how the unlawful traffic interference section of the bill mentioned “specifically what [protesters] were doing: ‘sitting, standing, kneeling, laying down.’”

“That is already very intentional on language because who else kneels if not protesters and race-specific protesters?” Wang said. “It goes beyond just protesting or unlawful assembly; it is very targeted.”

Mayesh disagreed, arguing that the bill is not directed toward communities of color. “What happened this summer provided the impetus, but it doesn’t mean that it’s because there are people of color,” he said.

“Anyone is capable of protesting or rioting, and in fact, a lot of the protestors are not people of color; a lot of them are white,” Mayesh said, noting that he did not fully support the bill. “If the law is applied evenly, which it oftentimes isn’t, then [SB 66] is okay. I just can’t make assumptions about how it’s going to be applied, until it happens.”

Smemo pushed back against the idea that the bill is not racially targeted.

“So much of a driving demand of the protests that we saw last summer—I think that really crystalizes what’s motivating [SB 66]: what kind of anxieties and fears are hitting at least from the perspective of assuming conservative lawmakers and police departments,” Smemo said.

Although WUPD is not explicitly classified as a qualifying law enforcement agency under the bill—public, rather than private, university police departments are mentioned—student protestors could still be impacted.

“Depending on whether we’re talking about a felony or a misdemeanor, if you engage in an unlawful assembly on the Wash. U. campus in violation of Missouri state’s unlawful assembly provision, then you could be arrested and charged, either by WUPD acting under their own authority or with some concurrent jurisdiction by the Clayton police or the county police,” Inazu said.

Mayesh said that SB 66 would encourage students to “be more aware” when choosing to participate in protests. He pointed to a protest, Oct. 27, in which students demanding the abolition of WUPD blocked the intersection at Forsyth and Wallace for five minutes. Mayesh argued that if people block traffic without a permit, the police should be able to enforce the law, and with this new bill, students who participate in a similar protest could be charged with a misdemeanor or felony.

“Not everyone will be arrested, and they will likely arrest some people, but then they end up releasing most of them anyway,” Mayesh said. “So students will be more on their toes about this sort of thing. I mean if you were following what this rule is you won’t get in trouble.”

Smemo hopes that if SB 66 passes and is signed into law, the University would take action to protect the rights of student protestors.

“Connected to the University’s intellectual mission to encourage free inquiry….help[ing] protect the constitutional rights of its students would seem to be incumbent upon the University,” Smemo said.