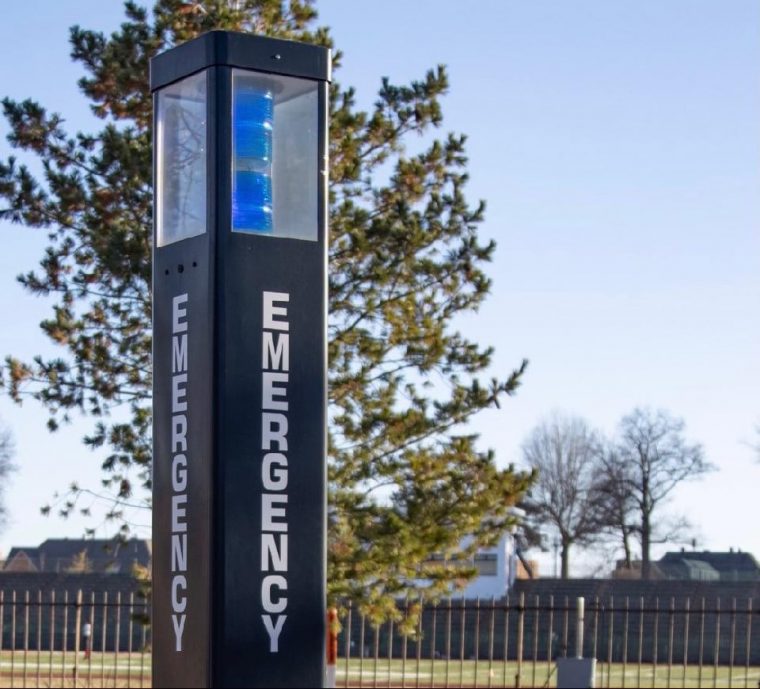 Individuals in a white Toyota car and a truck shot at each other as they drove west along Delmar Blvd. east of Skinker Blvd. at approximately 11:45 a.m., April 3. A stray bullet hit the apartment window of Washington University students living on the 4th floor of Everly on the Loop, Washington University Police Department Chief Mark Glenn confirmed, but no students were injured.

Two occupants of one vehicle were transported to the hospital with unknown injuries, while the other vehicle fled the area.

Glenn said that WUPD contacted the St. Louis Metropolitan Police Department, the primary investigating agency, to notify them about the apartment, and contacted Washington University Student Affairs to connect the impacted students with any resources they may have needed.

At 2:45 p.m., WUPD sent students an updated security memo stating that the on-site investigation had been completed by St. Louis Metropolitan Police and University City Police.

Junior Addison Liang was eating brunch outside Meshuggah Cafe when the shots were fired, but both she and her friend did not think that the sound they heard was gunshots.

“We heard the gunshots and looked around, but figured it… [was] just another noise from traffic since it was in the morning and we were on the Loop,” Liang wrote in a statement to Student Life. “A few minutes later, a police car drove up with sirens and lights on and the officer ran into a building. We heard more sirens and saw additional police cars headed towards the area [where] we were sitting, so my friend and I left and started walking back to my apartment.”

Jen Kaslow, owner of Meshuggah Cafe, was also present when the incident occured but did not hear any alarming sounds. She was told that there were shots fired, but it was not until the patio emptied out suddenly that she realized something was wrong.

“We were really busy [and] the patio was full,” Kaslow said. “Then I noticed the entire patio started to clear out, and so tables that were filled with people were gone and then shortly after that all the police cars started speeding down Delmar and filling Delmar.”

Some patrons did not return for their food, she added, while also commenting on the number of families at the cafe that morning.

“It felt like an informal parents weekend,” Kaslow said. “A lot of parents [were] having breakfast at Meshuggah with their kids and I was like ‘I’m sorry this is not indicative of St. Louis.’ I’ve never seen anything like that in the Loop, and I know that people definitely feel hesitant about the Loop, but I’ve never experienced this.”

Although WUPD sent officers in the afternoon to assist with the investigation, Glenn said that the event seemed random and did not indicate a need for increased police presence in the future.

“This is a random event; it’s what we’re seeing now, and we’re still early in the investigation,” Glenn said. “We really don’t know what precipitated this incident, or what led up to it, or if it just happened right then and there.”

Kaslow also said she thinks this was an isolated incident that won’t affect business long-term.

“I’m not [concerned] because I think the Loop has always had this sort of reputation and has gone through having a worse reputation and then regaining a sense of stability, but for me, it hasn’t really changed,” Kaslow said.

Although a different gunman fired a shot at West County Center, a popular shopping mall for Washington University students, April 2, Glenn said the recent incidents do not seem to be connected. He emphasized, however, that students need to be alert of their surroundings and “be ready to take some action to protect yourself and protect those around you.”

“Even when you’re out just having fun, if something happens, you have to be ready to get yourself to safety, wherever it is, within wherever you’re at,” Glenn said. “Know where you would go in the event of an emergency… When you go into a shop or you go into a restaurant, know where the back entrances are if you have to get out of the building.”

Liang said she was satisfied with the level of communication from WUPD on the day of the incident, noting that she was alerted through her email before any local news outlets.

If WUPD gets additional information out of the investigation that would be helpful for the community to stay safe, Glenn said they will update the student body with another security memo.

This story has been updated as of Wednesday, April 7 at 1 p.m. with information from Addison Liang and Jen Maslow.