With just three out of five Student Union executive board races contested and fewer candidates for Senate and Treasury than there are open slots in those bodies this year, candidates convened for a forum over Zoom, March 23.

The forum, which took place one week before SU elections on March 30, covered topics ranging from accountability and transparency to the role of WUPD and Greek Life on campus. The time was broken up into three sections for senate candidates, treasury candidates and candidates for executive positions. 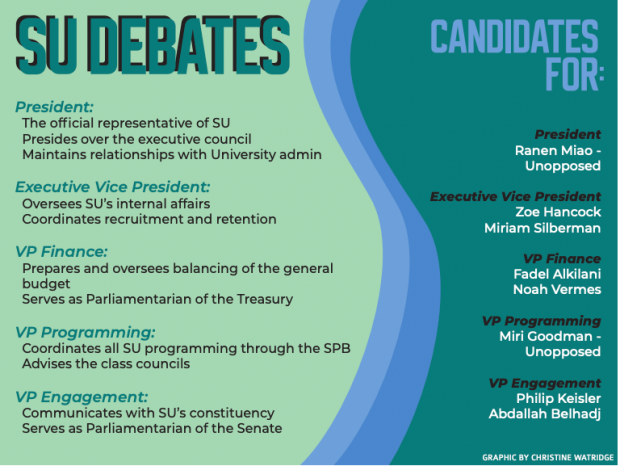 Current SU president sophomore Ranen Miao lamented the limited number of candidates, noting that the lack of contested races is a particularly bad problem given how many of the candidates are SU incumbents.

“For SU to continue to have legitimacy, we need to continue focusing on outreach and recruitment specifically for marginalized students who might not feel like they belong in Student Union,” Miao said. “We need to acknowledge our history of racist or sexist acts and try to create a better institution that is more reflective of our student body.”

The candidates were asked about their positions on a variety of topics, ranging from their goals for SU to the University’s role in the greater St. Louis community.

When asked about the possibility of acting upon student calls for the abolition of WUPD and Greek Life, some candidates discussed the importance of addressing student concerns while maintaining realistic expectations for the campus community.

“We should be honest with students about how realistic transitions away from Greek Life and WUPD are… Greek Life, at least for the foreseeable future, is here to stay,” Senate candidate sophomore Jojo Spio said.

Senate candidate freshman Emma Platt responded to this question by acknowledging that many students are attracted to Greek Life for its community and suggesting the dedication of more resources to other organizations to foster their communities.

“There are many wonderful opportunities to be a part of communities if that is what you’re looking for,” Platt said.

Miao criticized University administration for not supporting Greek Life abolition and called for fraternity houses to be turned into affinity spaces.

“This is an issue of moral courage—the University…continues to not be able to justify why fraternities are the only student organizations on this campus that have their own houses,” Miao said. “That is why it is necessary for us to implement space equity and redistribute those fraternity houses to student groups, especially marginalized students, to create affinity spaces so that we are not just a top 20 school but we’re actually like other top 20 schools, all of which offer affinity spaces for students including international students, BIPOC students, gender minorities, LGBTQ+ students and low income students.”

Executive candidates were asked about their perspectives on free political speech on campus, prompted by a conservative student’s claim that SU fundamentally misunderstood the issue.

“There is no requirement in terms of belief or organization statement for you to become an SU-recognized group,” Hancock said. “We recognize and fund College Republicans and College Democrats and WashU For Life and WashU Planned Parenthood organizations—we have the ability to support all of those and we actively do so.”

Another highly debated topic was disparities in how SU allocates its funding. Alkilani identified WILD as an area that is potentially overfunded.

“We spent half a million dollars on WILD every year which I think is insane whenever we have inadequate mental health care and all these other things,” Aliklani said. “And every single year, I have advocated and pushed for reducing WILD funding in order to push more towards funding the student groups where people are actually doing activist work.”

Vermes said that it was not appropriate for him to categorize certain parts of the budget as underfunded and overfunded since they all play important roles on campus, but highlighted his goal of establishing an “student activism fund” to support student protestors and activist organizations.

Supporting activists was also brought up by Keisler, who said that SU should be doing more to support people like alumna Sabrina Sayed, who was charged a $1,500 fine for spray painting the George Washington statue at a protest last fall.

“It’s incredibly important that SU is standing up for activists when Wash. U. takes punitive measures on them as well,” Keisler said. “We’re seeing [this] with Sabrina Sayed, with Wash. U putting a very ridiculous fine that is way out of proportion with what was done. And I think that it’s important that we don’t let Wash. U. make examples out of people and that we stand with them, not just at the protests, but afterwards as well.”

Senate candidates were also asked how to best support segments of the student body that are hurt by an event on campus or elsewhere. Many candidates emphasized the importance of listening.

“It’s important that one, we stand in solidarity with them but that two, it doesn’t stop there… also take action,” Cresci said, relating the question to the recent attacks against Asian American citizens in Atlanta.

“It’s most important to be there for the student body when they’re hurting,” Platt said, noting the need for an active role in allowing students a platform to use their voices.