After approximately 100 students gathered at Brookings Quadrangle for a rally to abolish Greek Life, Feb. 26, students marched to Fraternity Row to demand the dehousing of fraternities.

This protest comes as the 2021 WPA and IFC recruitment cycle is currently underway, with significantly fewer students choosing to participate in the recruitment process compared to previous years. Since the summer, more than 50% of Greek Life members at Washington University have deactivated from their oranizations, following outcry over a system that some students argue is classist, racist, homophobic and misogynist.

After arriving at Fraternity Row, students planted their signs in the yard outside the houses, and students were invited to participate in an open mic.

Junior Lawton Blanchard spoke about the importance of creating social stigma surrounding Greek Life, arguing that students who knowingly choose to align themselves with a system that perpetuates class discrimination, white supremacy and anti-LGBTQIA* ideology should be socially punished.

“We need to pull the weed out at the source,” Blanchard said. “That means getting these houses abolished on the University side, and it means destroying the system of social prowess that is associated with Greek Life.”

Following the open mic, students hung up large cardboard “AGL” letters, embedded with anonymous testimonies, along with a “dehouse frats” banner, on the door of Sigma Nu. A Washington University Police Department officer told the students that they needed to stop hanging up signs and said that the house was private property.

“These are the same frat houses where instances of interpersonal violence happen, where drugs are sold and where underage drinking happens, but sign-hanging is where we draw the line,” junior Nana Kusi said to Student Life in response.

“The main function of WUPD is to protect property; they don’t care about student activism,” junior Jasmine MacFarlane said. 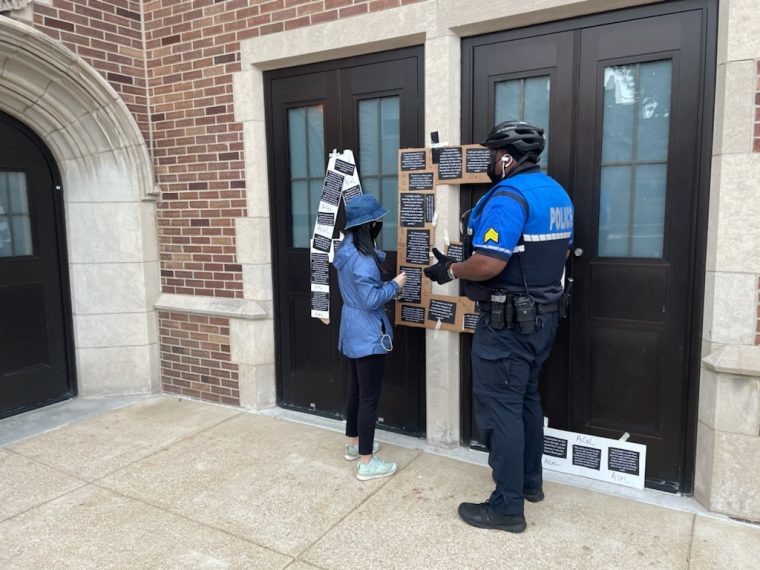 When a protester did not provide solicited identification to a WUPD officer after hanging up a sign on the Sigma Nu house, the WUPD officer called over Beth Doores, associate director for Campus Life, and they spoke privately.

Doores declined to comment at the scene, but addressed the topic of space on campus designated for Greek Life in a statement to Student Life.

“Space equity is a long-standing issue on our campus and needs to be addressed with the identities of today’s students,” Doores wrote. “The topic of space is multi-dimensional and as such needs to be explored from that perspective. Where a person builds their relationships, celebrates their identities, lives, and meets to discuss student group business is influenced by space.”

In a letter written to Chancellor Andrew Martin, Abolish Greek Life (AGL) demanded that “all WPA (Women’s Panhellenic Association) and IFC (Interfraternity Council) chapters at Washington University must be banned by the University so that the national charters would thereby be revoked on campus.”

Concerns raised in this letter mirrored the concerns relayed by the speakers at Saturday’s march for abolition, which spanned from rape culture to systemic socioeconomic exclusion.

“Greek Life is a multi-year paid crash course in cognitive dissonance, a constant obstacle course for anyone of a marginalized identity,” junior Izzy Jeffries said. “Every day you choose to ignore the harms you are causing by placing your ability to party, engage in community and be chosen as valuable over the happiness, safety and well-being of people you know and people you don’t know.”

Jeffries also detailed how a toxic culture permeates many facets of the organizations, beginning with the recruitment processes.

“I sat through a full seven days of listening to people I considered family dissect, analyze and rate women as if they were prize cattle, and I actively participated in it, justifying the means by the ends,” Jeffries said.

AGL speakers pointed to the socioeconomic hurdles that come with joining a sorority or fraternity. Dues for Greek Life membership range from $400 to $800, and AGL’s platform maintains that “there aren’t nearly enough scholarships, opportunities or payment plans put in place by fraternity and sorority chapters for students who can’t afford dues to feel welcome.”

Kusi explained that many people join Greek Life to make friends. However, she went on to denounce the exclusivity of social spaces and networks facilitated by Greek Life.

“I think that necessitates an answer to the question: Was I more deserving of that opportunity to socialize and network and get plugged in, just because I can pay hundreds of dollars of new member dues, because the girls liked what I was wearing on philanthropy day or because I knew somebody that was already in the organization?” Kusi said. “Absolutely not.”

Jeffries described how, as president of Lamda Q, an organization that attempts to supports queer members of Greek Life, they witnessed the intense marginalization of queer women.

“I will never forget the experience of seeing a live poll indicate that members of my sorority were uncomfortable with seeing queer people at our functions and in our chapter,” Jeffries said.

In addition to the exclusion of marginalized identities, former fraternity members described the cycle of harm and sexual assault that Greek Life perpetuates. According to the University’s 2019 AAU Campus Climate Survey, 15.7% of sexual assaults involving physical force or incapacitation occured in fraternity houses.

Senior and former Beta Theta Pi member John Harry said that he had spent two years trying to reform Greek Life, but when the abolition movement formed last summer, “it felt like a cover had been lifted from my eyes.”

“Time and again, someone would express that Beta didn’t feel safe, or we would find out that yet another person had been the victim or a survivor of sexual assault…We would try to make a change, and then that same thing would happen again,” Harry said. “We were fixing a leaky faucet while the house was flooding.”

Junior James Cevasco described how when he initially joined Tau Kappa Epsilon, he believed there were “good fraternities” and “bad fraternities.”

“The good fraternities claimed to be not like frats at state schools, or they care about getting good grades,” Cevasco said. “The bad fraternities had open convictions of hazing, Title IX violations and even more problematic issues that were very public at the time, and still now.”

Cevasco said that he came to realize that all fraternity members are complicit in a broken system.

“Seeing my fellow fraternity brothers react with such staunch defense, despite such clear indicators that so much is wrong within our fraternity, helped me realize that people continue to support frats regardless of the number of crimes they’re guilty of,” Cevasco said.

Harry added that he finds a “problem with house power dynamics,” since fraternities are the only student organizations given University-owned housing.

“When a woman walks into a house owned by men at a party thrown by men, there’s a power dynamic, and no number of facilitations or sober contacts will change that,” Harry said. “If we take away the house, there’s no longer a house power dynamic. If we take away the system, it can’t corrupt its members. And if the problem is with the people, why are we giving them a source of institutionalized power?”

Kusi agreed and asked attendees to “consider the politics of space on campus.”

“Fraternities are the only organizations that have entire buildings dedicated to their operations; sorority women get suites; the Association of Black Students gets a suite that doesn’t have AC,” Kusi said. “We shouldn’t have spaces on campus that are sites of trauma, sites of violence and, frankly, sites of substance abuse. Think about the politics that the University throws itself behind by these shrines to institutions of classism, racism and heteromisogyny on our campus.”

Rob Wild, interim vice chancellor for student affairs, said that he agreed that “fraternities do have unequal access to housing space on campus compared to other organized groups.”

According to Wild, the fraternity houses on campus were historically owned and operated by the Fraternity Housing Corporation, but about 15-20 years ago, the University took over the management of these houses. Still, however, Wild said that each house has a specific agreement with the University, and it would take up to three years to break the terms of most agreements.

Wild also said that the University began trying to address the “unequal playing field on campus” by turning House Five into the Hamsini Living Learning Community—a residential space dedicated to exploring issues related to the African diaspora—in 2018, rather than turning it back into a fraternity. The Phi Delta Theta chapter had been permanently suspended earlier that year.

“We’re still reviewing the recommendations that came out of the Co-Curricular Advisory Board, but we would agree that we need to equalize access to lots of things: social space on campus, housing space on campus and student groups based on campus,” Wild said. “We can’t just do it overnight; you have to work towards it.”

While some WPA and IFC members argue that the current systems are flawed but reformable, members of the AGL movement insist that the system is past the point of reform.

Jeffires said that diversity and inclusion trainings were so poorly attended that WPA members needed an incentive to attend.

“We were told that we would lose the privilege of going to a party if we didn’t attend,” Jeffries said. “The threat of losing the opportunity to be sexualized by men and to get drunk was the only way to get people to care about racism and assault in our own chapter.”

Junior Emily Regan said that as the former WPA president, she was in charge of reform and witnessed firsthand the failures of reform efforts. She described how chapters would send in fake numbers to act like enough people attended interpersonal violence prevention and diversity and inclusion trainings. She also said that the University administration “forcibly proofread any piece of writing that was sent to the entire community to ensure that it didn’t portray the school in a bad light.”

“I witnessed abysmal attendance at reform meetings, community members doing anything they could to cut reform corners and presidents dodging conversations about change,” Regan said. “Reform sounds great, in theory, but take it from someone who spent nine months trying, it doesn’t work.”