The international executive board of Alpha Omicron Pi voted to withdraw the charter of Washington University’s chapter, immediately halting all chapter operations, Jan 21. Following months of calls for the abolition of Greek Life, AOII is now the second sorority at the University to officially disband after Pi Beta Phi in October. 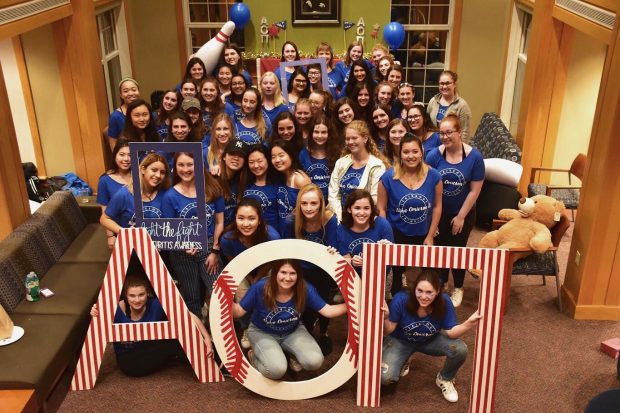 Former AOII member junior Lacy Wilder said that the chapter almost unanimously decided to work towards disbanding during the summer of 2020, but they faced significant resistance from their national organization’s leadership.

“We got in contact with the AOII headquarters and explained to them our point of view and why we were trying to get our chapter abolished instead of reformed,” Wilder said. “And headquarters was not particularly receptive to what we had to say; they very much dominated all of our conversations, and they didn’t really see where we were coming from in terms of wanting to get our charter revoked, even if [we] as individuals personally had had a good experience in our sorority.”

Due to the lack of receptiveness from AOII headquarters, Wilder chose to deactivate from her chapter over the summer. However, she remained close to several friends who decided to remain members of the sorority through the fall semester in order to continue fighting for the permanent close of the chapter, which they ultimately achieved.

“Headquarters’ main reason for revoking our charter was the significant drop in membership,” Wilder said. “Which is fine, except it’s not the reason that we wanted our charter to be abolished. We felt like they weren’t necessarily receptive to our concerns about why we actually wanted the charter revoked.”

Several former members of AOII are working with the Greek Life abolition movement to call for other chapters to relinquish their charters and to discourage students from going through the rush process.

“I would encourage people who are considering going through recruitment to really take a step back and look outside of themselves and listen to members of the LGBT community, Black and Indigenous people of color and people from marginalized socioeconomic groups, and really take stock of their experiences and how they’ve been harmed by the institution of Greek Life before you think about how you might personally benefit,” Wilder said.

Junior Nana Kusi, who is spearheading the abolition movement’s plans for direct action, also shared advice to those considering joining a Greek organization.

“I would encourage potential freshmen who are considering rushing [and] those in organizations now who are considering dropping or haven’t dropped, to have a really robust and substantive discourse with somebody that might have an opinion that’s different from yours,” Kusi said. “I think there’s a lot of misconceptions around why students are pushing for this or where this came from, and there’s a lot that can be elucidated through these discussions [with] people from different perspectives.”

The closure of Alpha Omicron Pi, as well as Pi Beta Phi last October, are significant steps toward the changes that many students are calling for.

“Over the summer we had University administration, particularly Rob Wild, making comments such as the fact that getting rid of Greek Life isn’t going to stop sexual assault, it’s not going to stop racism, it’s not going to stop classism,” Kusi said. “Obviously, we recognize that getting rid of Greek life is not a panacea for any of the issues that we are highlighting in this movement, but it’s a question of what are we going to give a path to operate on campus and have social capital on this campus…There are a lot of things that are emboldened by these organizations and allowed to fester unquestioned in these organizations.”

However, Kusi emphasized that the abolition movement wants change beyond just the closing of chapters.

“There’s also the greater question of rethinking how we socialize as a campus,” she said. “Many aspects of social life at Wash. U. are segregated, not just along racial lines but socioeconomic lines as well. As a former member of Greek Life, I’ve seen how Greek Life institutionalizes that and reinforces that, and I would really like to see a social sphere at Wash. U. that is more equitable in that regard.”

During the fall 2020 semester, multiple other sororities attempted to officially close their chapters, including Delta Gamma and Kappa Delta. However, largely due to a lack of receptiveness from the national organizations, those efforts have failed to yield results. Additionally, some sorority members who deactivated during the summer have chosen to rejoin Greek Life.

“There’s always going to be a distinction between those who are going to do what’s convenient in the moment and what makes them look good, and what an individual’s true beliefs are and what really motivates them day to day when nobody’s looking,” Kusi said. “We’ve heard the term ‘performative activism’ thrown around a lot since the summer, and I think this is one example of that—who is really willing to put in the work to actualize the things that they believe in?”

The University’s remaining seven sororities are preparing to host a restructured recruitment process, with changes such as the removal of registration fees, no required attire and a less formal structure. The 2021 Women’s Panhellenic Association Potential New Member Guide states that “we would like to emphasize that by joining a WPA sorority this Spring, you are making a commitment. Not only are you committing to membership, but you are also committing to being an active part of Greek Life reform.”

However, members of the abolition movement have long expressed skepticism about the potential for any meaningful reforms within Greek organizations, particularly as many marginalized communities on campus have pointed to the structural racism and inequity inherent to such groups.

Both WPA recruitment and actions aimed towards abolition are scheduled to take place in the coming weeks, with an informational WPA panel on Feb. 7 being immediately followed by a panel titled “Why I Dropped: Alternatives to Washu Greek Life,” discussing Greek Life abolition and explaining the harms of Greek Life on Feb. 8.