Chancellor Andrew Martin introduced the Midwestern Climate Summit at its virtual kickoff event on Oct. 2 by stressing the urgency of the project’s ambitious short and long-term objectives.

The Midwestern Climate Summit aims to accelerate work in climate action, outreach, engagement, research and education. While the six-week-long summit was forced to transition online due to the COVID-19 pandemic, that shift opened up new opportunities for expansion.

The summit’s founding partners, including Bloomberg Philanthropies, Ohio State University and Washington University, spurred the main initiatives, but the event is meant to be a true collaboration between a large number of stakeholders. Leaders hope to work with higher education institutions, local government partners and business community partners to build momentum toward climate action. 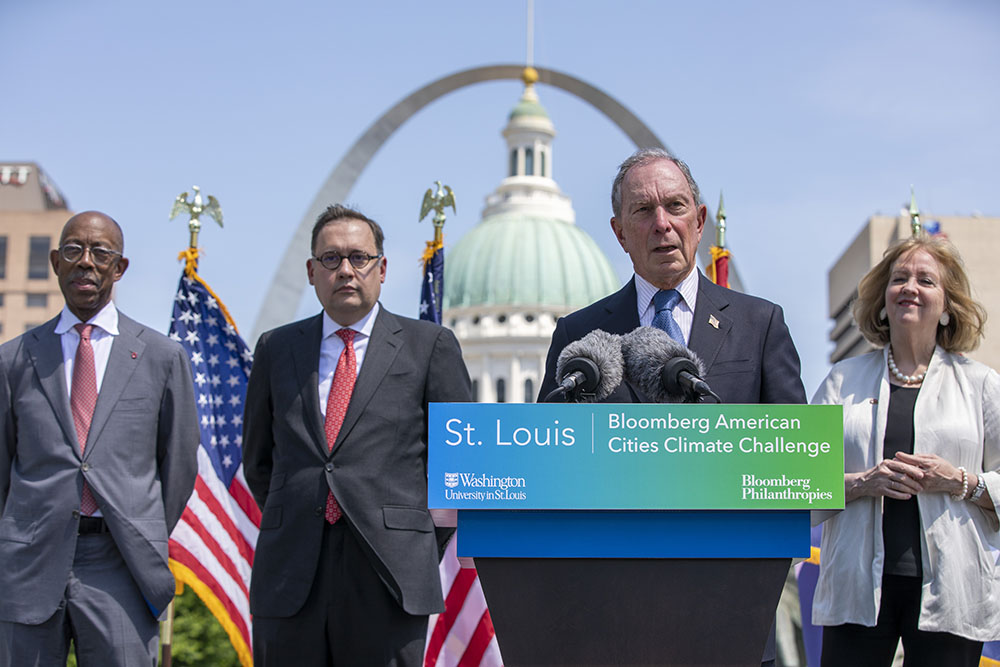 The summit started with a land acknowledgement led by Phil Valko, assistant vice chancellor for sustainability and executive committee member. “While none of us played a direct role, we are the beneficiaries of this history,” Valko said, echoing the theme of equity that ran throughout the entirety of the summit.

Dr. Robert Bullard, the first speaker at the kickoff, emphasized a similar message throughout his keynote speech.

“This whole idea of addressing equity is a prerequisite to achieving climate-resilient communities,” Bullard said. “When we provide the greatest protection for the most vulnerable, we provide protection for us all.”

Highlighting the theme of equity was an intentional move by the students and administration team that planned the event. Marginalized communities are historically, systemically and repeatedly excluded from climate conversations, but it is those communities that are the most disproportionately affected by climate change.

“That [exclusion] felt so wrong, on so many levels, and was something that we had a lot of conversations about, especially the way that we want to elevate the voices of people who are historically excluded from these conversations,” sophomore Julie Deleger, a student member on the steering committee, said.

The student representatives pushed to find speakers representative of the groups most impacted by climate change for the series of online sessions, titled the Think Tank. Deleger said that when considering speakers, the sub-committees would ask themselves, “Are we sure that we aren’t just giving the same mic to the same voice, over and over again?” to ensure that the speaker lineup was specifically targeted to achieve a focus on justice and equity.

The summit was originally scheduled to occur over two days in St. Louis, but adaptation for COVID expanded the project’s reach. Instead of following the blueprint of previous conferences and summits, it pushed organizers to maximize their reach and make the events accessible to a wider audience.

“It has made us be really creative and [think] about doing this in a way that’s really authentic to our goals and engaging with our participants,” Deleger said.

That creativity involved the organizers broadening their reach, as the summit is now accessible to participants outside of St. Louis. Eliminating location-based barriers to entry made the event much more open and accessible.

Professor David Fike, director of environmental studies at the University, said that the move online ensured that the summit is open to anyone who wants to log in and that it will not contribute to the carbon footprint associated with travel to major conferences. While there are also challenges that come with holding an online event, such as making sure that participants are actually engaged, the planners attempted to combat Zoom fatigue with a dynamic experience involving breakout rooms, discussions and workshops.

The kickoff session on Friday was just the beginning; Think Tank events will continue on alternating Fridays until Nov. 20. The series is expected to draw in thousands of participants from across the country, creating drive for the focus to shift to follow-up actions in the spring.

One of the major goals for the summit was to have conversations and dialogues that generate momentum, especially for larger institutions. The continuation in the spring will serve to hold these institutions and organizations accountable.

“My biggest hope for this is that we do generate a momentum especially amongst students that will carry on to the spring, because it’s a constant chipping away at layers of legislation, layers of administration and layers of bureaucracy, and that nothing is going to change if we aren’t constantly working at it,” Deleger said.

“This decade is a critical decade to take action, and the action has to be action that connects both planet and people,” Valko said.