‘The University is out of time’: BLSA and WUGWU students frustrated by WU’s lack of answers

Near the start of the meeting, which had almost 200 students in attendance, class of 2020 alum Christian Ralph asked Martin to explain why the administration prioritizes the needs of wealthy white students over the needs of students of color who are endangered by University policing.

“I’m not sure that I can directly answer that question, because I’m not sure I agree necessarily with its premise,” Martin responded.

“You don’t think that is how the University in actuality functions?” Ralph asked.

“Without seeing the empirical basis of that claim, I’m not going to say one way or the other,” Martin said.

“It just wasn’t a good faith showing,” Ralph told Student Life after the meeting. “He was just completely wrong and made categorically false statements regarding what the University did and didn’t do…The whole structure of the University is set up to prioritize the needs of some students over others.”

One such example, Ralph said, is how the University chose to respond to a 2019 uptick in off-campus crime by escalating the Washington University Police Department’s presence through added officers and increased neighborhood patrols, despite the discomfort this caused for students of color.

“Black students have talked about how, not only have they felt unsafe, but that police literally put their lives in danger, whether it’s WUPD or St. Louis Metropolitan,” he said.

In a conversation with Student Life, WUGWU Campaign Chair Grace Ward emphasized St. Louis’s history of racial and economic inequality, suggesting that white students should ask themselves if they use their own comfort to justify the “extreme policing of poor communities and communities of color within the campus’s immediate orbit,” she said. “The conversation needs to come back to how we talk about crime around Wash. U. and how we talk about the role of WUPD, in terms of making some students feel safe at the expense of other students, and definitely at the expense of the community.”

At the meeting, Black students shared stories of negative interactions with armed WUPD officers and asked Martin how he planned to ensure that such incidents of police aggression did not continue to occur, particularly during mental health crises.

“I think that the issue of whether or not and in what circumstances our police force is armed or not is something that we need to have a conversation about,” Martin said. “And that’s a conversation that we plan to have in an open and transparent fashion in the upcoming year.”

“Do you think it’s ever necessary for police forces to have AR-15s in their cars?” Black Law Students Association President Cass Oliver asked.

“I’m not in a position to answer that question at this point,” Martin answered.

“I was utterly amazed that he couldn’t answer the question,” Oliver told Student Life after the meeting. “Even if he can’t take the AR-15s out of their cars, to me it just seemed like a lack of empathy, that he couldn’t even say in his own opinion that [WUPD] shouldn’t have military grade weapons on them.”

“If a majority of students of color are telling you that they do not feel safe, will you disband, disfund or disarm WUPD?” senior Jessica Yu asked.

“Not necessarily,” Martin said. “I think it’s important for us as a community to go through a process, to lay the data on the table, to explore various policies and ultimately decide what the optimal policy is for the University.”

Instead, the University should “immediately — as in, now — have an operational task force redefining the role of WUPD on campus,” she said. “Not talking about the idea of starting the process, or exploring what the University’s private police force is doing, but right now making changes and bringing in evidence from other universities who have undertaken projects to demilitarize and disband their police forces.”

At another point in the meeting, Yu asked Martin to explain the discrepancy between encouraging students to engage in advocacy for racial justice and the University’s history of arresting protesters, such as Fight for $15 protesters in April 2019.

“I appreciate the advocacy,” Martin said. “At the same time, we have buildings that close, and in that particular situation, we were very clear to the students who were there that the building closed at six o’clock and if you weren’t going to leave by six o’clock you were going to be arrested.”

“We were actually told by your staff that we would be arrested even before the building was closed,” Yu said. “So that indicates to me that the University does not support students advocating for change.”

Martin did not directly respond, instead referring to the ‘Martinville’ protests that went on for weeks following the arrests in his office. 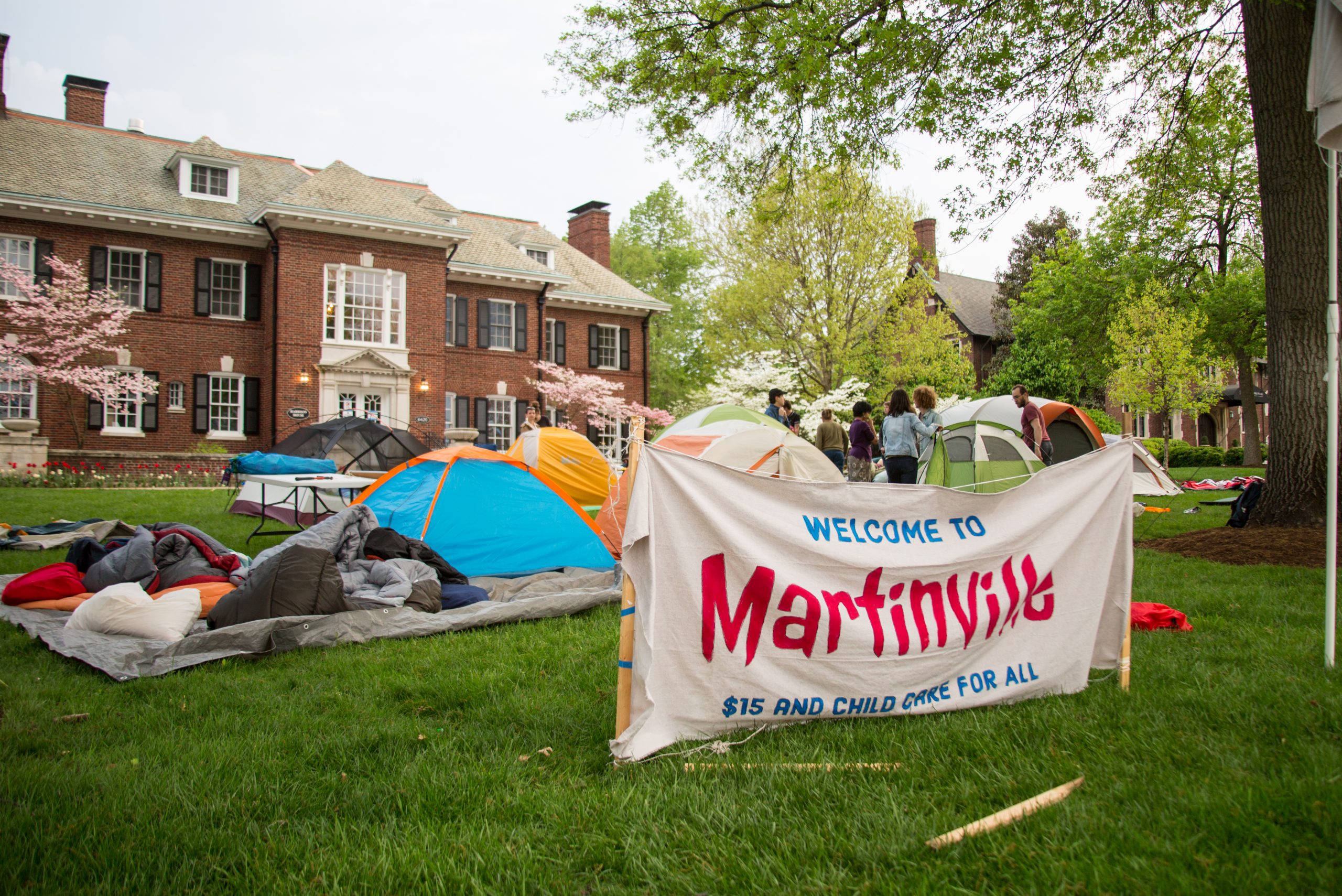 “That was something that I was supportive of — there was certainly no issue with that,” he claimed.

The Martinville encampment was forced to relocate after being told by University officials that students would be arrested if they remained outside of Harbison House.

Speakers said that this often forces students of color to turn to off-campus resources, and asked what investments the University is making into the greater St. Louis community in response.

“It’s something that we need to be working on, and so I’m fully supportive of that,” Martin said. “As I sit here today, I’m not going to commit to any particular financial or time commitment, but I think it’s important that we look at those resources in their totality and decide what model is right for us.”

One student asked why the University had chosen to turn down $6.4 million in CARES Act funding that could have been directed towards student and worker relief. Martin was unable to provide specific reasoning, but said that anyone interested would be able to follow up with the University’s general counsel to see the relevant legal analysis.

Students also asked Martin if he would be willing to commit to neutrality towards any union actions or allow campus workers to unionize in the future.

“I’m not gonna directly answer that question,” Martin said. “We have been operating in a very complicated economic environment.”

“Either he wasn’t prepared at all to actually know what’s going on in the University that he’s been running for more than a year, or he was consciously unwilling to respect us enough to give us answers,” Ralph said.

Oliver pointed out that BLSA and WUGWU had presented a platform to Martin a full week prior to the meeting.

“He knew what this meeting was about, and still had no information for us,” she said. “He made a point to talk about how the police are accountable to him, but if that’s the case, then this information should be easily accessible to him.”

Students extensively prepared for the meeting by doing the necessary research to back up their assertions, Ralph added.

In an email to Student Life, Martin wrote that he had come to the meeting primarily to listen.

“We were not able to answer every question at this meeting, but we have an intentional plan to continue the conversation as we begin the next academic year, and I’m committed to working together to find common ground and create a campus environment where everyone can feel safe and have their voices heard,” he wrote.

Oliver emphasized the importance of students continuing to push for meaningful changes rather than settling for performativity.

“At this point it looks bad to not be an ally to some extent, so a lot of actions that come from the school are PR moves to shut us up, not substantial and tangible change,” she said. “The good thing is that we’re gonna keep trying and keep mobilizing until something gets done.”

Ward and Ralph agreed that the current momentum among students had a strong potential to lead to meaningful changes, pointing out that the meeting was just one of a series of actions planned by BLSA and WUGWU.

Earlier in the month, the two groups organized a Juneteenth March involving current and past University students as well as faculty, staff and St. Louis community members.

More than 400 individuals marched from the Washington University School of Medicine to the Chancellor’s house on the Danforth campus, stopping traffic and blocking intersections along the way.

Martin was not present, but Oliver presented the group’s demands — including divesting from St. Louis city and county police, reallocating funds from WUPD to student mental health resources and addressing the absence of race-conscious instruction — to a University representative.

“[Students are] not going to accept the status quo; they’re not going to accept the delaying tactics the administration is famous for using,” Ralph said. “Just look at what’s been happening across the nation, and how certain actions by protesters got the system to listen…I think students are looking to that and seeing it actually works. And I think the University is out of time.”