Students put together an online petition last week calling on all academic departments of Washington University to allow students, both undergraduate and graduate, to opt into any class pass-fail with few restrictions and to count those courses toward major, minor and graduation requirements, or for students to choose to keep a letter grade. 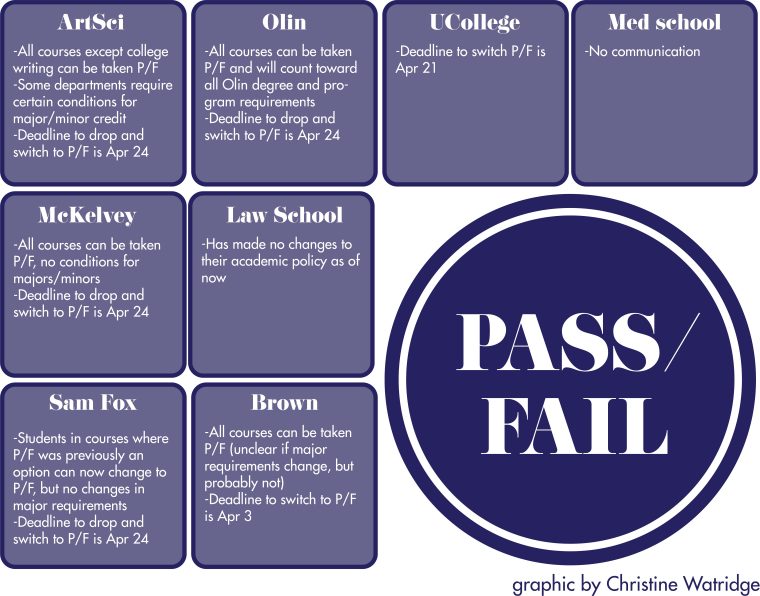 After the COVID-19 pandemic unexpectedly forced students to return home, away from campus for the remainder of spring semester, many students were left worried about maintaining their grades and fulfilling academic requirements from afar, while adjusting to an online learning environment and living under the pressures of a global pandemic.

The petition’s creators, junior Sophie Scott, senior Ashlee Chung and Master’s student Rory Mather, hope that expanding pass-fail options will help tamper these anxieties and will particularly assist students from low-income and under-resourced backgrounds, international students and those with academic accommodations. At the time of publication, the petition had 2,401 signatures.

The petition asks all University departments to allow students to take any class pass-fail if students wish, to accept those classes toward major or minor credit and other graduation requirements, and to not count spring 2020 courses against pass-fail credit caps.

Initially, the petition’s creators hoped these changes would take the form of a campus-wide policy. After discussions with University leaders—such as interim Provost Marion Crain—March 20, however, Scott said they changed their direction into a more ground-up, department-by-department approach.

They now aim to get each department to allow expanded pass-fail policies, rather than calling for a sweeping, top-down approach. According to Scott, the group learned that a campus-wide decision would not be possible due to how faculty governance operates.

“During this time, students want a way to fight for control over their situation, and fight for the policies they want to see, and giving students this space to not only sign their name but show their story of how this has impacted them, has been a way that students feel like they get a little bit of the power back,” Scott said.

Currently, each department can choose whether to change their pass-fail policies to allow pass-fail classes to count toward major or minor credit, and each school also has the ability to set school-wide policies. If departments choose to alter their pass-fail rules, they may still put in place specific restrictions and requirements.

The School of Arts and Sciences, the largest school at the University, released information about pass-fail policies in an email to students March 20. Nearly every department in the school now allows students to take any class pass-fail and to count it toward major and minor credit. A few departments have placed restrictions on certain classes or require a specific, slightly higher grade threshold for a pass-fail class to earn major or minor credit. Additionally, courses taken pass-fail in Arts and Sciences this semester will not count toward the 24 credit pass-fail cap, and there is no limit to the number of pass-fail courses a student can take this semester. Courses can be switched to or from pass-fail until April 24, the last day of classes.

In an email sent to Arts and Sciences students March 20, Dean Jennifer Smith shared details about those changes, including a list of every department and whether or not it allows pass-fail courses for major or minor credit.

“As announced last week, we’ve made significant changes to [students’] ability to take courses P/F, and to count those classes towards various degree requirements,” Smith wrote. “The vast majority of Arts & Sciences courses can be taken P/F and still count for whatever requirements [students] intended them to…The only specific requirement College-wide that must still be taken for a letter grade is College Writing.”

After Arts and Sciences released information last week, Chung, another one of the petition’s creators, said she hopes the other schools at the University will make announcements in favor of expanded pass-fail later this week.

“Right now, it looks like ArtSci pretty much has the pass-fail system in place, but we really are urging McKelvey [School of Engineering], Olin [Business School], as well as Sam Fox [School of Art and Architecture] to also address the same issues,” Chung said. “I don’t think it’s fair that one school has this option while others don’t have the option to do pass-fail.”

According to Chung, a major reason the campaign started was because of changes to pass-fail policies at other universities around the country, including Vanderbilt University, Duke University and the Massachusetts Institute of Technology.

Some schools have allowed an opt-in pass-fail structure, which both Chung and Scott support, while others—like MIT—now have a mandatory pass-fail policy.

Chung hopes that the petition will also encourage the Provost, the Chancellor and other University leaders to recommend that departments move to changes for pass-fail policies, though she pointed out that individual department chairs and the deans of each school have most of the power in making any changes. She also urged students to share their stories and to continue signing the petition.

“One thing that’s been overwhelming is seeing how much students have been suffering from this academically,” Chung said. “But not only that, we all know that at the end of the day, academics aren’t the only thing. A lot of these students are going home, they’re going to have to support their family, they have to find a new job, they have to risk their life just to even find a job, and I think those reasons, those stories, have motivated Rory, Sophie and me to push for this petition. Personally as a Deneb Star, this has been really tough on me, and the uncertainty of COVID-19 and the situation has driven me to continue pushing for this fight, and we’re really hoping for some good news.”