‘Push the boundaries of what SU can do’: SU elects new executive leadership

Freshman Ranen Miao beat out two other candidates in a close race to become the next president of Student Union, joining sophomores Anne He and Arjan Kalra and juniors Alexa Jochims and Charlotte Pohl on the new executive board following their election, March 3. 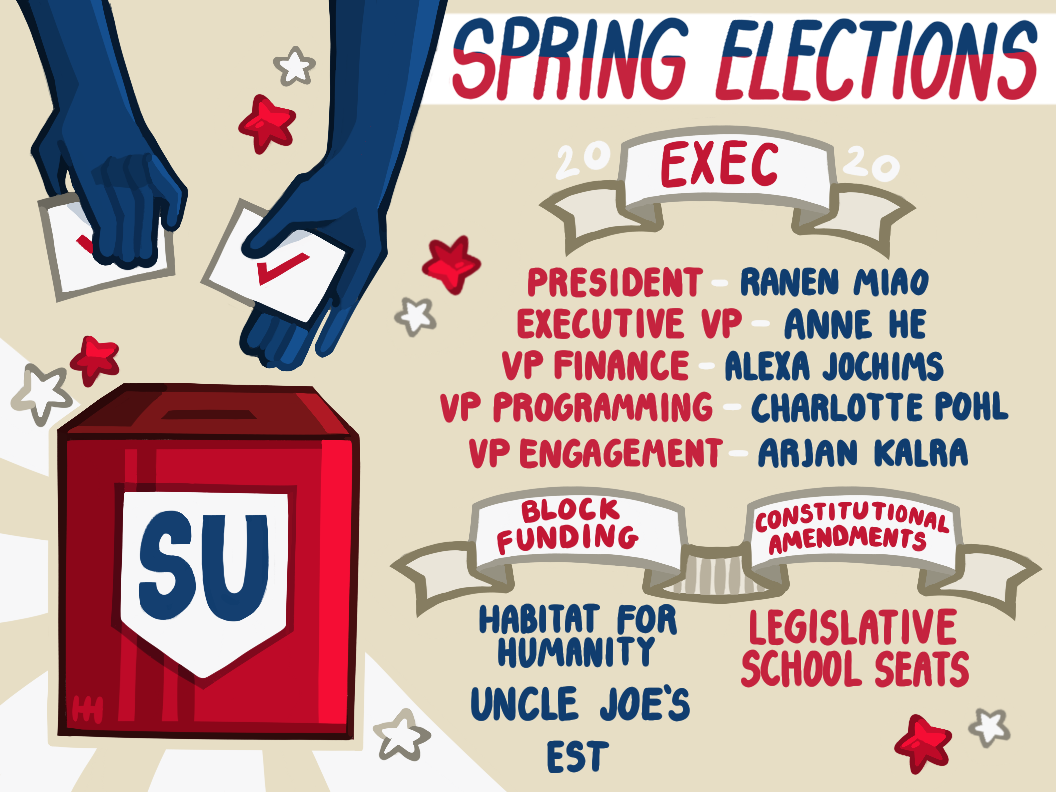 Miao, who campaigned on an expansive list of platforms that included increasing access to menstrual products on campus, fighting for need blind admissions and combating food insecurity, won with 38% of the almost 2,000 total votes.

Miao said that his top priorities going into his term would be increasing mental health access and socioeconomic equity.

“One of the reasons I ran for this position was because we got the administrative commitment to get more menstrual products into our buildings,” Miao said. “And that win for me made me feel like I was able to make change, even in a position that I don’t think is as significant as SU president, and I wanted to bring that vision for advocacy to a higher level to make sure that we get even more changed on our campus.”

Although he is new to Student Union, the First Year Class Council President said that he was excited to build strong new relationships.

“I definitely want to learn a lot from the students who are currently in Senate and Treasury and reach out to every person who’s a representative and try to get dinner or lunch with them to hear where they’re at right now, along with meeting the other newly elected officers,” Miao said.

Anne He was elected as Executive Vice President, receiving 66% of the vote.

“I think I was able to engage with a lot of students through the campaigning process, and so did all the other candidates,” He said. “And that’s something I would want to emphasize like in the future—I don’t want us to just be engaging with students during campaign season…This election cycle SU has definitely had a presence on campus, and that should be what we’re striving toward year round.”

In addition to engaging the general student body, He said she was looking forward to working with the other newly elected officers.

“I’m very excited for this team because I think we’ve got some experienced people and we’ve got some people who have new perspectives coming from outside of SU, and I think that’s a really good foundation for productivity,” He said.

Kalra won his campaign for Vice President of Engagement by just one percent of the vote—the narrowest margin of victory in recent Student Union history. Kalra said he was looking forward to having the ability to really define his role and choose what to focus on.

“Especially with the engagement role, something I’m really looking forward to is connecting with students and making a face for SU that they can actually trust and talk to,” Kalra said.

During his time in the financial branch of Student Union, Kalra worked to increase transparency and communication with the student body. He said he was confident that he could bring similar changes to the broader SU.

“The potential of what an exec can do literally comes down to how they work together as a team,” Kalra said. “I’m very confident in this group’s ability to come together as a team, hopefully, and then over the next year push the boundaries of what SU can do.”

Jochims ran uncontested for Vice President of Finance and won with 92% of the vote. She previously served as first a member and then as the Speaker of the Treasury.

“I’m excited for a different perspective coming into those meetings [and] the financial branch and having the opportunity to work more big-picture with other people on the exec team that have more access than I could get as speaker of the Treasury,” Jochims said.

Jochims emphasized her past experience working with a wide range of student groups on campus, pointing out the importance of having connections to a variety of student interests.

“There are these two big overarching ideas that we really have to focus on: how SU functions and how we reach out and work with the student body,” Jochims said. “And you can’t have one or the other—you need both working in tandem for you to actually be able to get done what you want to get done. I think really starting to plan that from day one will be really important and something that I’m definitely excited about.”

Pohl ran uncontested for her third term as Vice President of Programming and won with 91% of the vote.

Pohl said she was a bit disappointed that her election was uncontested.

“Contested elections are great and that obviously drives voter turnout and general engagement with Student Union,” Pohl said. “I think it would be interesting to kind of change up how recruitment is done from the past, and see if there are ways to reach out to people beyond Student Union to run.”

An amendment to change the Senate election rules so that the body no longer had to accept at least one member from each school passed with 86% of the vote.

“I introduced the amendment because we had instances where one person was running unopposed from a small school, got a super low amount of votes and was able to displace someone who had gained three times the amount,” said former Senator sophomore Dylan Cassilly. “Representation can’t be forced, and I think it’s coming around naturally now. Competitive elections are really healthy, and I encourage everyone to run—especially if you’re in one of the smaller schools!”