‘They will still be involved with the process, having fun, a part of the house’: Kappa Sigma places two pledges on suspension 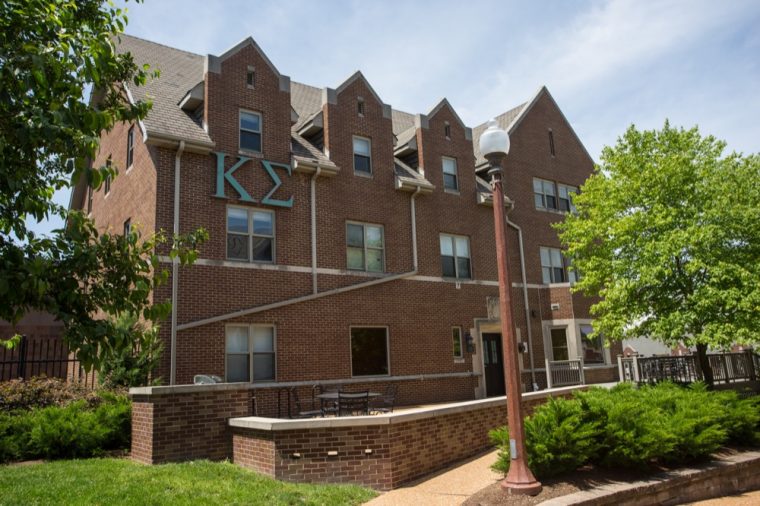 The controversy’s escalation was motivated by a comment on a GreekRank.com post titled “Who wins cross bids?” Jan. 30. The comment alleged that among Kappa Sigma’s new pledges were “someone super problematic” and a “rapist.”

During the spring rush process, Kappa Sigma was notified by other fraternities that they had dropped one of the students rushing.

“Basically their rush chairman called one of our rush chairmen and said, ‘Hey, just wanted to let you know we dropped this kid for stuff that happened in our basement.’ And they wouldn’t really specify what it was… [and] we ended up giving the kid a bid,” senior Sam Edison, a member of Kappa Sigma said.

Separate accusations were made against another pledge, who had allegedly thrown a drink at a woman.

“At the time of bid vote, I was aware of basically the totality of this incident, presented it at the chapter, and also talked it through with the young woman who was involved and we decided, with all the relevant information being disclosed, to still extend a bid,” sophomore Logan Krohn, Kappa Sigma’s social chair said.

As discussions over the two pledges continued on GreekRank.com and within the Greek community, members of Kappa Sigma reached out to Campus Life’s Coordinator of Fraternity and Sorority Life Molly Bennett for guidance on how to navigate the situation.

Bennett based her counsel on the fact that there have been no formal allegations against any pledges.

“We have given all of the assistance we can to the chapter in terms of guidance and where to go from here… but because we do not have the jurisdiction to dictate membership in fraternities and sororities, there’s nothing else that we can do,” Bennett said.

Edison said that Bennett had been in contact with Kappa Sigma for “so long that she had to report these stories to Title IX,” as she is a mandatory reporter.

According to Edison, the Title IX Office concluded that there was not enough information available to open up a case and that they did not have any additional guidance.

“They weren’t sure what we were supposed to do in this situation,” Edison said.

Both Edison and Krohn explained that they were instructed to not seek out any information about the allegations as a fraternity because they did not have the proper training. They were, however, told that they could evaluate the validity of a claim if someone were to approach the chapter with information and act as they saw fit.

If the fraternity were to find anything that corroborated the allegations, Krohn added, he would personally not hesitate in voting to drop the students from the pledge class.

Despite the guidelines from Campus Life prohibiting the chapter from further investigating the situation, Krohn said that he began to conduct a personal investigation by reaching out to various freshmen, sophomores, fraternity members and even high school friends of the pledges in question. The investigation was not specifically in the context of sexual assault, he said, but about any questionable behavior.

“Simply stated, all I was able to find was that these kids have pretty glowing reputations,” Krohn said.

Krohn said he then went even further, uncovering the identity of the alleged victim and reaching out to students who lived on their floor.

“I identified the source of the rumor, the half-truth it was based off of,” he said.

Again, Krohn noted that he did not specifically ask about sexual assault, but rather tried to identify a “pattern of disrespect.” His decision to look into the overall reputation of the accused pledge rather than investigate the specific allegation of sexual assault, he said, was due to his goal of being trauma-informed.

“The last thing I wanted to do was to…make any person on this campus feel like their story or their lived experiences were being sought out, especially for political reasoning or in a way that was potentially threatening,” Krohn said. “So my first position was to remove myself as much as I could from the idea of this big investigation by asking peers, specifically women in the freshman class, if they could, not on my behalf but for my sake, tell me any information they had…But in no way was I ever seeking out information that was specifically about sexual assault.”

Lacking concrete findings about the alleged assault, Krohn acknowledged that there was some ambiguity remaining in the situation.

“I can’t say that [the allegations] are for sure true or for sure untrue, but I like to operate as if we still have—this is gonna sound silly—a mystery rapist among the ranks that we need to be vigilant about,” he said.

Kappa Sigma followed up the sororities’ concerns with a letter to the Greek Life community apologizing for remaining silent about their voiced concerns. The letter also explained that they had met with the University.

“We are truly sorry if our silence was perceived as indifference to the issues of sexual assault,” the executive board of Kappa Sigma wrote. “We are not waiting for this incident to blow over but we need time to ensure we take the most responsible course of action. While it is not our intent to put the onus on you to fix the situation we created, we would greatly appreciate any input you feel comfortable sharing.”

According to Krohn, the future of the alleged perpetrators in Kappa Sigma looks bright.

“Although they’re on suspension, they’re still part of their pledge class involved in all solely fraternal aspects of pledging,” Krohn said. “So they will still be involved with the process, having fun, a part of the house.”

However, Krohn and Edison did not entirely disavow the allegations that had been made.

“I don’t think we decided that it wasn’t a credible concern,” Krohn said. “I think we were aware that people could have felt unsafe, not only because there were credible allegations of things these kids did, but because of the fact that there are rumors out there.”

Krohn detailed his personal intention to reach out to every sorority chapter on campus. He is currently in communication with the executive board of a sorority chapter and has offered to hold open forums for any sorority members to discuss the situation.

When asked what advice she would give to sorority women concerned about their safety at Kappa Sigma events, Bennett said it was up to them.

“Everyone can make their own decision,” Bennett said. “If someone does not feel safe, then they do not have to attend a social event.”

Editors note: A quotation was misattributed in this article. We have updated it to reflect the correct speaker. We regret this error.

The Sexual Assault and Rape Anonymous Helpline (S.A.R.A.H) provides confidential and anonymous support and can be reached at 314-935-8080 24 /7 during the fall and spring academic semesters.

There are counselors at the Relationship and Sexual Violence Prevention (RSVP) Center, located in Seigle Hall, Suite 435, available confidentially to any University student. The office can be reached at tel:314-935-3445 or by email at mailto:[email protected]