A federal judge dismissed a lawsuit brought against Washington University by a former student who was expelled after being found guilty of sexual misconduct, Jan. 21.

The student, identified only as John Doe, was expelled in November 2018 and sued the University in February 2019.

In his ruling, the judge concluded that there was no evidence that the University engaged in a “conspiracy to deprive him and other men of their civil rights in order to gain a competitive advantage among potential female students.”

The former student was accused of physical and sexual assault and was also the subject of multiple op-eds published by Student Life. He alleged that the op-eds created a hostile environment and an “inflammatory call for action.”

The student also claimed that the University “permitted female students to interfere with [his] rights when it permitted his accusers to protest on campus…and other females called for the jobs of several Washington University administrators if they did not convict [him].”

The protests mentioned in the lawsuit were led by Title Mine, a student group that serves as a bridge between the student body and the administration in pushing for Title IX reform. The former student alleged that the protests were “incited by his accusers and intended to prejudice [his] right to a fair trial,” claims which the judge found to be unsubstantiated. 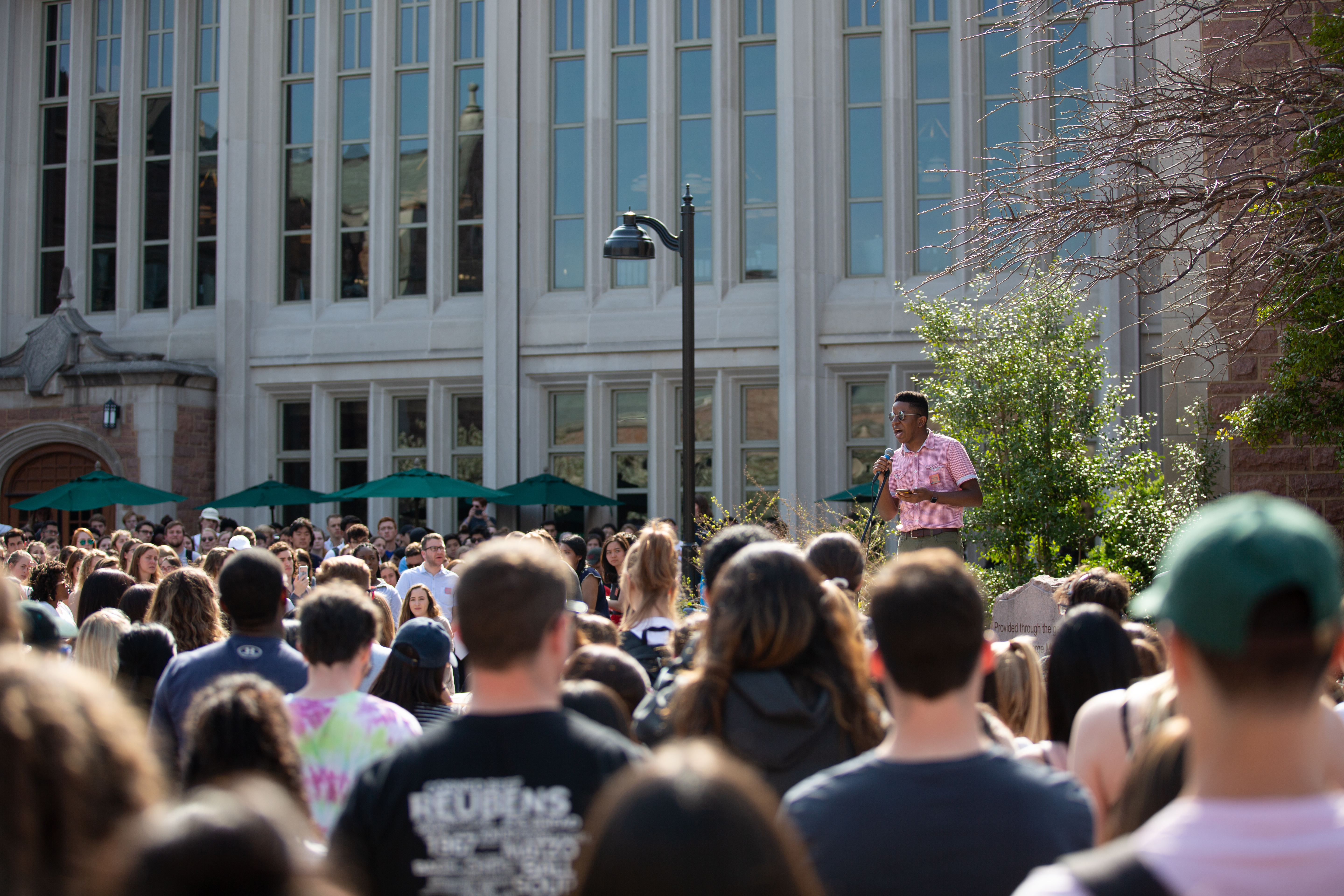 A speaker fires up protestors outside the Danforth University Center during an April 2018 rally to protest Washington University’s handling of Title IX investigations.

“Title Mine is happy to see that justice has been served and that this case has finally been dismissed,” Title Mine President Candace Hayes said. “For far too long, perpetrators of interpersonal violence have manipulated the law in their favor, and this judge said enough is enough. Hopefully this is the last we hear of this case, so the survivors can heal knowing their perpetrator has been held accountable.”

Although the University has taken steps towards accomplishing some of these goals, many students feel that there is plenty more to be done.

“I’m definitely heartened to see a case that produces results even slightly in favor of the survivor—and yet I think it’s important to keep in mind that outcomes like these are not the norm, and that Wash. U. and other institutions have a lot of work to do,” Title Mine member and sophomore Sarah Slutsker said.

Title IX procedures need to be more trauma-informed, according to junior Maia Bender-Long, who is also involved in Title Mine. “The process can permeate into every aspect of the survivors’ life…hefty medical bills, mental health, academic career,” she said. “While changes have been implemented thanks to the work of the Title IX process improvement working group, the work is not over.”

Bender-Long pushed back against the lawsuit’s claim that “a male student’s chances at a fair Title IX decision [are] slim to none, as [is] his chance to be treated the same as his female accusers.”

“Title IX cases require the same standard of proof as other student conduct cases, such as academic dishonesty,” Bender-Long said. “In order for it be unfair, one party would have to receive something the other did not during the process. In this particular case, there were instances where the respondent was actually provided more aid.”

“The perpetrator being expelled from campus is an adequate response to the severity of the case,” Bender-Long added. “This was a repeat offender who had repeatedly harmed students’ well-being.”

The judge’s decision comes in the midst of an ongoing national conversation about the fairness of Title IX. Bills introduced last year to the Missouri Senate and House of Representatives would shift the balance even further in favor of the accused. Critics have expressed concerns about several aspects of the bills, including the failure to make a distinction between claims that are intentionally false and claims that simply cannot be corroborated.

According to the National Sexual Violence Resource Center, fewer than 40% of sexual assaults are ever reported, and between 2% and 10% of reports are false or unsubstantiated.

In March, the University released a statement saying that it “strongly opposes legislation that is pending before the Missouri legislature that would effectively gut the University’s process for handling sexual assault and misconduct on our campuses.”

“The biggest concern I’ve seen is that the Title IX process is neither quick nor easy, despite their own website saying they’re committed to timely process,” Student Union Senator sophomore Dylan Cassilly said. “It’s always great to see the University change policy and practice because of student action, but there’s still more that needs to be done.”

Bender-Long agreed that the process takes too long, pointing out that in this case, the original Title IX complaint was filed two full years ago. Moreover, she pointed out that supporting survivors needs to go beyond the initial reporting process. “Filing a Title IX case is a grueling process that jeopardizes survivors’ well-being,” she said. “Survivors often put their own mental health at stake to ensure punitive action is taken at all.”

“With regard to the treatment of the accused, if anything, I’d say that a lot of the University community has seen punishment come down too lightly,” Cassilly said. “The bottom line is that reporting shouldn’t feel like this much of a burden, and victims and survivors deserve better care than what they’re getting now.”

Editor’s Note: The Sexual Assault and Rape Anonymous Helpline (S.A.R.A.H) provides confidential and anonymous support and can be reached at 314-935-8080 24/7 during the fall and spring academic semesters.

There are counselors at the Relationship and Sexual Violence Prevention (RSVP) Center, located in Seigle Hall, Suite 435, available confidentially to any University student. The office can be reached at 314-935-3445 or by email at [email protected]