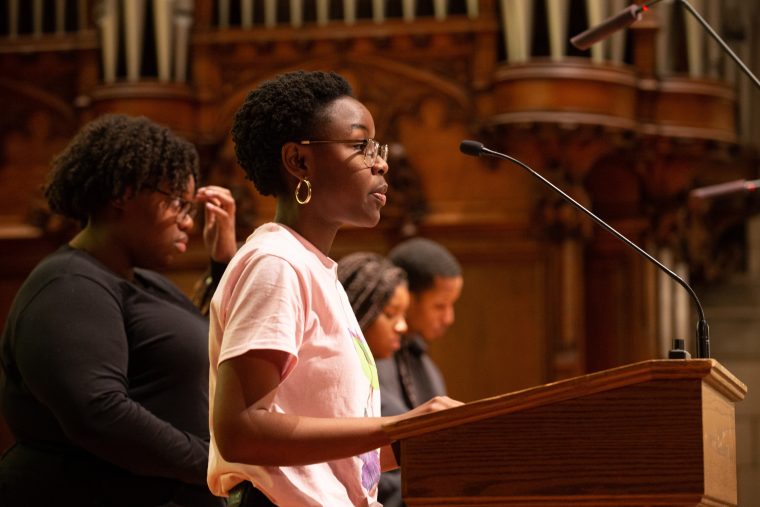 The theme of the commemoration was Dr. King’s famous assertion that “the time is always right to do what is right.”

In accordance with this theme, the University presented the Dr. Martin Luther King, Jr. Youth Service Award to Seth Phillips, a St. Louis teenager who helped a wheelchair-bound man reach his home before the beginning of a storm in a viral video. Phillips and his mother then started a GoFundMe to buy a new wheelchair for the man.

Martin began his keynote speech by acknowledging his position of privilege, noting the importance of listening to the needs of the communities one hopes to support.

“Yet here I am, the chancellor of Washington University, a white, highly-educated heterosexual male that was asked to give this keynote speech to you today,” Martin said.

Martin then incorporated the commemoration’s theme in his speech, focusing on the University’s ongoing initiatives to increase diversity and inclusivity on campus.

“Diversity on paper is not enough,” Martin said. “While we still have a great deal of work to do to arrive at full equity and inclusion, I believe as a community we have come a long way toward listening to the voices of those who continue to embody Dr. King’s struggle.”

Martin particularly emphasized a rise in representation of underrepresented minorities, women, Pell-eligible students and first-generation students on campus. He also detailed the University’s efforts to increase community outreach in the St. Louis region.

“[We] continue to lead the way in conducting research on health disparities and providing a healthcare safety net for the St. Louis region…” Martin said. “We’re also making strides to address the leaky pipeline in K-12 and STEM education through the Institute for civil partnership.”

Sophomore Samantha Weaver cited her desire to hear Martin’s plans for the future as one of her reasons for coming to the event, and said that she remains optimistic about Martin’s time as chancellor.

“I am happy that he’s at least starting his tenure here… with the call saying that we need action to be done,” Weaver said. “So right now… we just want to see what he’s going to do.”

After Martin’s remarks, the University’s oldest cultural show, Black Anthology, gave a performance written by sophomore Dakotah Jennifer, featuring a combination of the voices of different Black poets from the civil rights movement. The Visions Gospel Choir also performed “Lift Every Voice and Sing,” a song often referred to as the Black national anthem.

Second year MBA student Moksh Singh said that he felt moved by this performance, which helped him better understand the Civil Rights movement from the perspective of an international student from India.

“I didn’t know about the Black national anthem,” Singh said. “So, that was a surprise to me when it was sung and I saw the lyrics to it. It was very surprising and touching because I’m not from here, I’m Indian and I have not seen what had happened [in the Civil Rights movement] other than a few movies… That song I feel summarizes very well the feeling of what people have endured here.”

Marion Crain then delivered closing remarks encouraging students to do more than pay lip service to King’s legacy without seriously engaging with his ideas.

“Our schools, our parks, our roads and our bridges are named in his honor, but neither the man nor the movement were welcomed by the majority of Americans in his own time,” Crain said.

Both Martin and Crain encouraged students to embrace Dr. King’s challenge to “make America what it ought to be.”

“While we may find inspiration and hope in Dr. King’s words, we have a long way to go to achieve his dream,” Crain said.