‘We’ve made our demands’: WUGWU marches for $15/hour and free childcare

Washington University Graduate Workers Union (WUGWU) marched through campus in a protest that culminated in a Fight for $15 rally at Brookings Quadrangle and a sit-in at Chancellor-elect Andrew Martin’s office April 15.

The sit-in ended with the arrests of the eight individuals occupying the office. Since then, WUGWU and supporters have been camping in tents in front of Brookings Hall. They say they will continue to occupy Brookings Quad until the University agrees to their demand for $15 an hour and free childcare for all University workers. 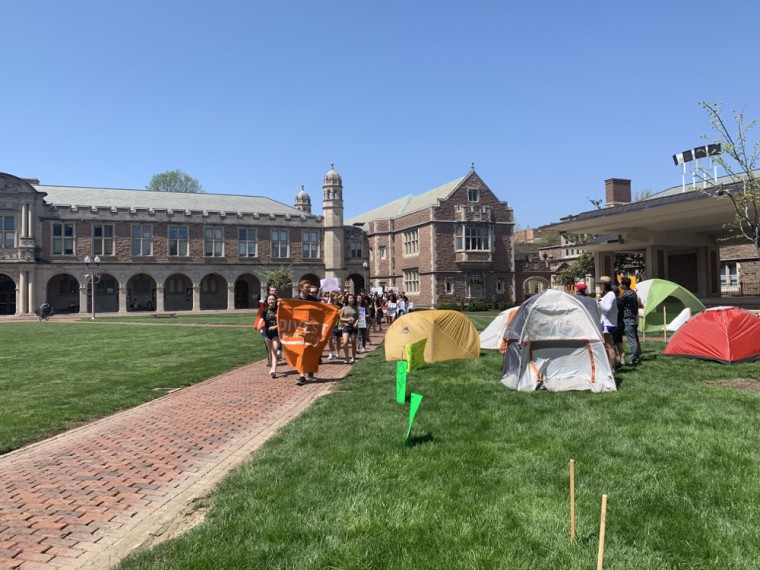 According to co-chair of WUGWU’s executive committee and Ph.D. candidate Grace Ward, WUGWU has been planning the demonstration since the beginning of the semester.

“At the start of this semester, we came up with the schedule for action, [gradually] building
up the capacity and the collective power so that we could get more people involved,” Ward said.

In late January, WUGWU attempted to deliver a petition with over 1,300 signatures to chancellor-elect Martin asking for a $15 minimum wage and free childcare for all Wash. U. employees. In early March, they repeated the same demands with a more somber tone at a candlelight vigil in Brookings Quad.

According to WUGWU Co-Chair of Communication graduate student Luciano M Santino, the march aimed to advocate for fair pay for workers across campus.

“The upcoming week is a big week for us, as it’s where the action goes,” Santino said. “The
march is for campus workers, community leaders, graduate workers, custodian staffs and
food service workers—basically everyone could stand to benefit from making a living wage on
campus.”

Saumya Deojain, a marcher and graduate student worker in the Economics department, said the march was important for her as an international student.

“What motivates me is essentially my identity as an international student. My department
consists [of] 90% international students,” Saumya said. “We are pretty vulnerable since we solely depend on the fund from Wash. U. to support our families back home. We used to
have a six-year funding, but now we don’t have it anymore, which led to tremendous
setbacks, including $25,000 less [per year].”

Ward said that they had difficulty choosing when to stage their action.

“We tried to find a time when there are a lot of people around campus in a bid to hit the audience,” Ward said. “Because this past weekend was Alumni Weekend and when ThurtenE Carnival happened, Monday is the day we chose.”

They marched, chanting “if we don’t get it, shut it down,” as demonstrators filed from Danforth University Center (DUC), passing through Olin Library and Holmes Lounge before finally assembling in front of Brookings Hall.

Sara Katz, a Master’s in Social Work (MSW) student in the Brown School and a member of WUGWU’s executive board, says the march demonstrated the potency of their message.

“There is a lot of community support and student support,” Katz said. “[This] sends a clear message to the administration that both the University, members of the University and a
larger community think it’s time to raise the wage to the standard of living wage for all
workers on campus…We won’t leave until the administration gives us a formal plan on how it will raise the minimum wage.”

Graduate student and member of WUGWU’s executive committee Charles McCrory was one of the eight people arrested during the sit-in on Monday. According to McCrory, the tents are a continuation of the office sit-in.

“We were booked for trespassing, but as you will see most of us are here now,” McCrory said. “We’ve been arrested, we’ve been told that we were trespassing when we were only peacefully presenting our demands to the chancellor. But we’re not stopping, and this is the continuation of that.”

McCrory said the atmosphere among the tent city, which they’ve named ‘Martinville,’ has been “very supportive and celebratory.”

“We’ve been very energized about the demands that we’re bringing to the administration,” McCrory said. “And we are committed and excited to be here and make our demands known until this University gives us $15 an hour and free subsidized child care.”

Ph.D. candidate Ian Mooney said that both administrators and supporters alike have stopped by the campsite.

“The administration has sent a few people by, and they always seem friendly, but they’re also always quick to remind us that they aren’t acceding to our demands yet,” Mooney said. “They haven’t given us any updates and they’re monitoring us very closely with a plethora of police officers. I don’t feel they’re being too communicative with us, but I suppose that’s their prerogative. The students who come by and the faculty who come by really seem to support us and that’s amazing. It’s really great to see people care and want this to happen.”

Participants said that they have no plans to stop their occupation in the near future.

“We’ll be here until the University provides $15 an hour and free subsidized childcare to all workers on campus, however long,” McCrory said.

Executive Vice Chancellor for Administration Henry Webber said that while he admires the passion surrounding the issue, he disagrees that the University should respond quickly.

“I admire people who are raising issues and pushing issues and putting things on the agenda,” Webber said. “I think that’s an important role of students at all universities, and it’s been true for a very long time. Students have played important roles in raising university issues, but the right response is reflection and discussion and deciding for the whole, not immediately saying yes.”

In agreement with Webber, Vice Chancellor of Public Affairs Jill Friedman pointed out how Martin’s transition into office affects the timeline of a University response.

“We also can’t let get lost in all of this that we have a new leader coming into his role and we also need to give him time. Especially since he’s not officially Chancellor until June 1; that hasn’t stopped this process in any way. There are a lot of factors that play into the timing.”

Webber said the University’s pays above average minimum wage and provides a “generous” benefits package, which includes a month of paid caregiver leave and housing assistance, as proof that employees are well taken care of.

“I’m not saying that it’s not a legitimate question, but the $12.65 is in fact, well above many of the proposals for national changes in the minimum wage,” Webber said. “It’s well above the democratic proposal in Congress…I don’t think the argument that we are an oppressive employer is a legitimate argument.”

“We’ve made our demands; it’s up to them now to meet them or fail to meet them,” Mooney said. “We just hope that the University can put their enormous resources to better and more equitable use.”