Assembly Series, Leaders in Interpersonal Violence Education (LIVE), the Woman’s Club and Student Union collaborated to host Valenti as part of the programming for Sexual Assault Awareness Month. LIVE will also host a discussion on Valenti’s talk on April 15. 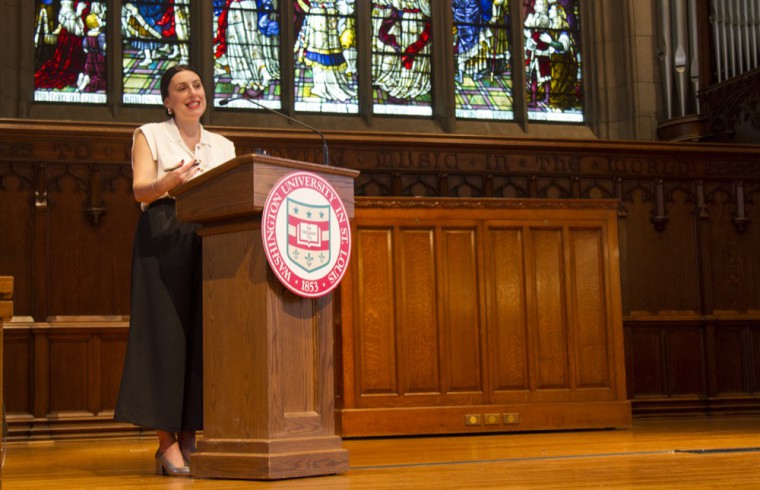 Valenti is the co-founder of feministing.com, a blog that has covered feminist issues since 2004. She has also written five books, worked as a columnist for The Guardian and regularly posts on the blogging platform Medium.

Valenti emphasized the importance of explaining the core values of feminism in order to demystify the movement and make it more accessible to a broader audience.

“I hear from folks every day…who despite believing in feminist values and having feminist ideas, aren’t sure they want to take up the cause,” Valenti said. “And a lot of this is because despite progress made, people still don’t understand what feminists do and who they really are. And that has been what my work has been focused on for more than a decade: trying to make feminism more accessible, especially to younger people, and working to make people understand what feminism actually is and what feminists actually care about.”

Valenti devoted special attention to the idea that certain attitudes and values on college campuses, workplaces and other spaces create cultures which perpetuate sexual assault.

“At the end of the day, this is not about numbers or statistics,” Valenti said. “It is about the environment we create that allows rape to thrive by giving rapists social license to operate. … It means all the various ways in which we make the world a little more comfortable for rapists.”

Senior Elana Ross cited issues of sexual assault and rape culture on campus as reasons why student activism is necessary to counter the attitude of complacency towards gender-based violence.

“I’m in a sorority, and Greek life culture is very toxic in general. … I think that fraternities need to actually be kicked off campus when they sexually assault people,” Ross said. “We need to talk about how it is not just white women who are being sexually assaulted on campus, that it is a lot of different groups. We need to talk about repeat offenders and we need to create a more cohesive narrative that gives us actually facts about sexual violence instead of just talking about it in abstract terms.”

While Valenti did not specifically address Greek culture, she encouraged students to explore ways that they can help combat gender-based violence both on and off campus.

“So how can we stop making the culture so comfortable for rapists?” Valenti said. “How can we chip away at that social license to operate? The truth is that we have opportunities to intervene every day, on college campuses especially, whether it is stopping someone when they are telling a rape joke, saying they got raped by a test or holding your university accountable for their Title IX obligations.”

While Ross agrees with Valenti’s general sentiments, she argues that Valenti’s narrative failed to include marginalized groups who are often left out of feminist narratives.

“When we use this word ‘intersectionality,’ we actually fail to talk about all the different systems that work against women, and we talk about women of color and trans folks like an endnote,” Ross said. “But what if we talked about everyone all in tandem? Because when we [marginalize minorities] it doesn’t create spaces where queer folks or trans folks can feel comfortable.”

Valenti’s talk took place almost a year after the beginning of the Title Mine movement at Washington University, and organizers hope that Valenti’s appearance will encourage the same type of student activism in the future.

“Last April, the Title Mine movement at Wash. U. took off, sparking passionate campus activism around sexual assault and issues with Title IX on our campus,” Alyssa Hunt, the Sexual Assault and Harassment chair of LIVE, said. “On the eve of Title Mine’s one year anniversary, it is imperative that our campus continues to engage with our own campus climate concerning sexual assault as well as the larger national conversation surrounding the #MeToo movement and gender-based violence.”