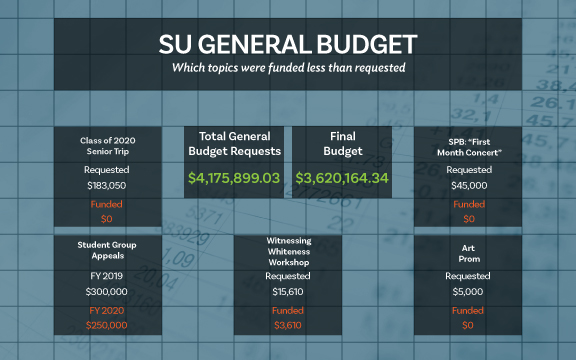 After the initial general budget proposal failed to pass, VP of Finance junior Shelly Gupta presented a revised proposal to the joint session of Senate and Treasury. In total, the second version of the General Budget was approved unanimously by both Treasury and Senate in less than ten minutes.

Over the weekend, the joint legislative bodies reviewed over four million dollars worth of general budget requests and proposed allocation recommendations. Gupta then took into account these recommendations in balancing the budget and creating her final proposal.

Both SU Senate and Treasury rejected the initial budget proposal due to disputes over funding for the Center for Diversity and Inclusion (CDI), Residential College Composting Program and Social Programming Board.

In an overwhelming majority, the legislative bodies recommended cutting all funding for the Class of 2020’s senior trip to Chicago. Junior Class Council requested $183,050, the entire cost of the trip. In the 2019 fiscal year, SU funded the trip for $64,150 with a ticket price of $240. Nearly 900 students attended, with SU providing financial aid for 86 students.

Both Senate and Treasury members expressed liability concerns over the trip. Some members referred to the senior cruise, during which alcohol is served, as a “booze cruise” and a “drunken river cruise,” although they amended their statements as inappropriate later in the discussion.

The senior trip budget request also sparked debate over the trip’s financial burden on low-income students. While eligible students can use SU Opportunity Fund requests to finance the trip, it would constitute the majority of available funds.

According to freshman treasurer Fadel Alkilani, defunding the trip may establish a precedent for future years without a senior trip.

“If we fund this, we just entrench the tradition of ‘Oh, I should go,’ even if [students] can’t necessarily afford this,” Alkilani said.

Other members expressed concern that if SU were to revoke some or all funding in comparison to previous years, low-income students would still feel pressured to participate, even if they may not be able to afford the trip.

“If [the class council] tries to fund it with fundraising, this virtually guarantees that low-income students can’t go,” sophomore senator Mason Simmons said.

It is unclear whether Junior Class Council will attempt to program the event without SU funding. In previous years, the portion of trip expenses not funded by SU constitute the individual ticket price paid by seniors.

While the senior trip went unfunded, SU voted to increase funding for Senior Week from $21,047 to $48,297, more than doubling its previous funding. By doubling its funding from last year, this change will lower the individual ticket price from $125 per student to $60 per student, making the events more financially accessible for seniors required to remain on-campus until commencement.

Although SPB experienced a net increase in funding of about $7,000, the allocations of these funds changed. The budget for both fall and spring WILD increased by about $7,000, while the comedy budget was cut by $3,500, and other line items faced smaller cuts.

A major point of contention during the weekend’s budget negotiations was increased funding requests for Happy Hour. SPB requested an additional $5,000 to cater to students with dietary restrictions as well as expanded food offerings. Gupta recommended that SPB simply reevaluate their existing food budget, rather than making a new request.

“I think it was a good request by SPB but also they could re-allocate within their food budget to accommodate for the special dietary restrictions that the new $2,500 request was trying to please,” Gupta said.

SPB was unsuccessful in its bid to receive funding for a new “First Month Concert” to be held in September on Mudd Field. The event had a total production budget of around $22,000, and an additional talent budget of $20,000. SPB billed the event as an alcohol-free alternative to the traditional Welcome Week events held in off-campus clubs. SPB president Adin Ehrlich cited research conducted by Campus Life that showed students were enthused over the idea of a dry event in the first few weeks of fall semester.

However, legislators had concerns that the concert’s proximity to dorms would lead to increased pre-gaming, where most incidents of alcohol poisoning occur. They also questioned the fiscal responsibility of funding a $45,000 concert in a year with a historically large budget.

Erlich says SPB plans to request funding for the event next year.

“Year to year, the deficit changes; [so,] maybe it won’t be as much next year, and maybe the next batch of senators will feel as though having the concert is a better thing,” Erlich said. “We’re just going to keep pushing for the things we’re asking for to make the student body happy and provide fun things for the students to do.”

Currently, the composting program is located in five buildings on the South 40. If a deal is not reached before July 1 to fund the program through Residential Life, the program will be funded by the SU carry-over funds, comprised of unspent general budget funding from the 2018-2019 school year. Gupta estimated that the carry-over would consist of about $50,000 based on previous years, $7,012.06 of which could fund the composting program for another year.

“I think [SU] exec can do our part to try to help Student Environmental Council, one of our entities, get this funded through ResLife. And in the event we can’t, we’ve built in a good security blanket where we’ll get this program funded; and then in the future, ResLife will pick it up,” Gupta said.

What else was cut?

Last year, attendance for Leadershape dipped to its lowest in several years. Less than 30 people attended, due to a change in scheduling that placed the event after finals instead of during spring break.

“This is a high-cost event for a small amount of people,” sophomore senator Nathan Card said.

Both Senate and Treasury members supported defunding the program, with Alkilani saying that there was “not enough interest for us to fund $10,000.”

“They have consistently and repeatedly shown that they do not spend anywhere near the amount that we allocate them,” Kalra said. “I just don’t feel like we should spend on an event that they have not spent on before for the time that they have been budgeted for.”

What received the most funding?

SU allocation boards claimed almost $1.7 million in funding, with $1.1 million of that amount going towards Category I Student Groups, $250,000 for Student Group Appeals and $230,000 towards Trending Topics.

“Overall, throughout the entire session, I think that everyone wanted as much money as possible to go to the CAT 1 allocation boards,” said Gupta. “Any excess, I put there.”

The Center for Diversity and Inclusion’s Affinity Group Event Fund, which was the subject of disputes during the initial general budget session, was allocated the original $4,000 it requested.

Gupta reached out to Dean of the CDI Emelyn dela Pena and reached a compromise in which SU was given discretion over how their affinity fund contribution was allocated.

“I’m confident in the increase…and the added security that SU could be included in the process of how to allocate,” Gupta said.

Funding for the Collegiate Readership Program, which provides free newspapers on-campus and a New York Times online subscription to students, was reinstated to $35,271. After funding was cut last year, SU and its newspaper providers entered into negotiations that allowed SU to pay only for papers picked up from the newsstands. Card was excited by the reinstatement of the funding.

“Of all the interactions I had with constituents after the last General Budget, the biggest uproar was over our reduction of the Collegiate Readership Program…I really think this is a worthwhile use of our money,” Card said.

The Leaders in Interpersonal Violence Education program saw its funding increased from about $2,000 to over $10,000, most of which will go towards a Sexual Assault Awareness Month speaker event.