Shiva focuses her environmental activism on genetically modified organisms (GMOs), women’s rights and conditions of agriculture workers in India and around the world. Forbes Magazine named Shiva one of the “Seven Most Powerful Women on the Globe” in 2010. 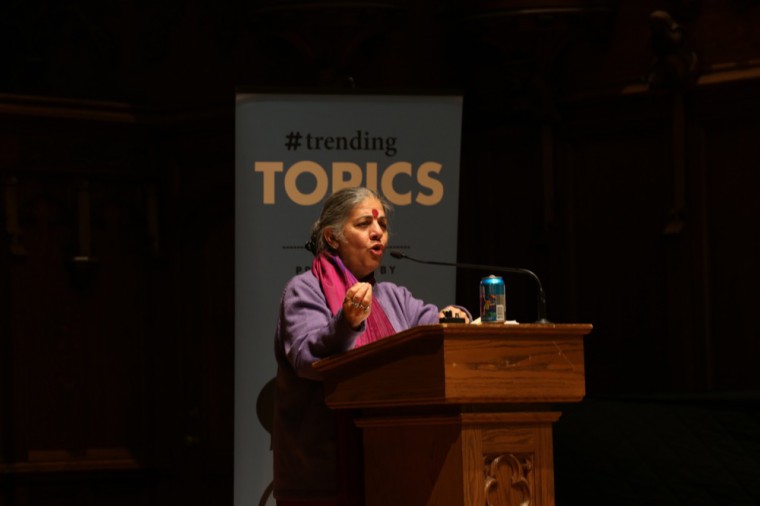 In her talk, “Earth Democracy,” Shiva discussed biotechnology and the concept of anthropocentrism.

Throughout her talk, Shiva emphasized the dangers of genetic engineering and external factors in agriculture in contributing to a logic of “extermination that has brought us to the brink of extinction.”

“There’s no breakdown in life if we allow life to function on her own terms. The seed in an amazing way can become a tree, as so in my pocket,” Shiva said. “An indigenous person gave me this acorn seed. This acorn seed is holding the potential of a giant oak. It’s built into the intelligence of the seed to become an oak. It doesn’t need policing by Monsanto to say: ‘Don’t become a coconut.’”

As a precursor to the event, Student Environmental Council sponsored a tour of Bayer Research and Development Facility for students Feb. 9 where students learned about Bayer’s use of and stance on GMO technology.

Sophomore Carmen Vescia attended both the Bayer tour and the talk by Shiva. In highlighting the differences between the two events, Vescia said Shiva gave a more nuanced view of GMOs while Bayer focused solely on the science and technology behind it.

“I thought [Shiva] gave a really amazing talk. She covered so much ground, and I think she does such an elegant job of explaining the history and context and all of the connections between the different issues she discussed, issues that people might assume are only environmental how those really impact people’s lives in incredibly profound ways,” Vescia said. “I think GMOs are a really complicated topic. Dr. Shiva discussed there are a lot of facets to it; and at Bayer, they were so focused on the science and how incredible the science was…I asked a question to a scientist about how they much they were thinking about policy [like] ‘When you’re creating things, are you thinking about what they’ll actually mean for the world?’ He kind of glossed over that.”

Senior Ivan Ginsberg also attended both events and said it was easier for him to see the world from Shiva’s point of view.

“She was one of the best speakers I’ve probably ever heard…She cared more about what she was talking about compared to the panelists at Bayer. Even though the messages were similar at least of ‘save the earth, sustainable farming’ with totally different methodologies, how she said it, how she conveyed her message and framed it felt a lot more authentic and that she really did care. She’s talked to the people and done the work of identifying and backing up her values,” Ginsberg said. “Her message was not about ‘we’re a business; we need to make profit’ at all, it was just purely: ‘How do we see the world sustainably? How do we take care of the planet? How do we live in one cohesive system?’ That was more or less how it felt.”

Shiva addressed the fallibility of technocentric approaches to Earth’s problems and the irresponsibility of politicians and corporations not focusing their efforts on environmentally sustainable actions.

“Elon Musk writes a lot about this with his SpaceX. A society [with] food on Mars, because there is no food on Mars. The richness of life is on this planet. When you think of a living planet, there is not a planet B…Now you can imagine that those who are defining the future of humanity, abandoning this planet is their priority, not taking care of it,” Shiva said. “Now, we can’t trust the future of this Earth with that kind of a mindset. That’s why I would much rather trust the Earth in the hands of the millions and billions and trillions of living beings who inhabit it.”