WashU Votes and SU host Party at the Polls

WashU Votes, an arm of the Washington University Gephardt Institute, teamed up with Student Union to host a Party at the Polls event during the national midterm elections Nov. 6. 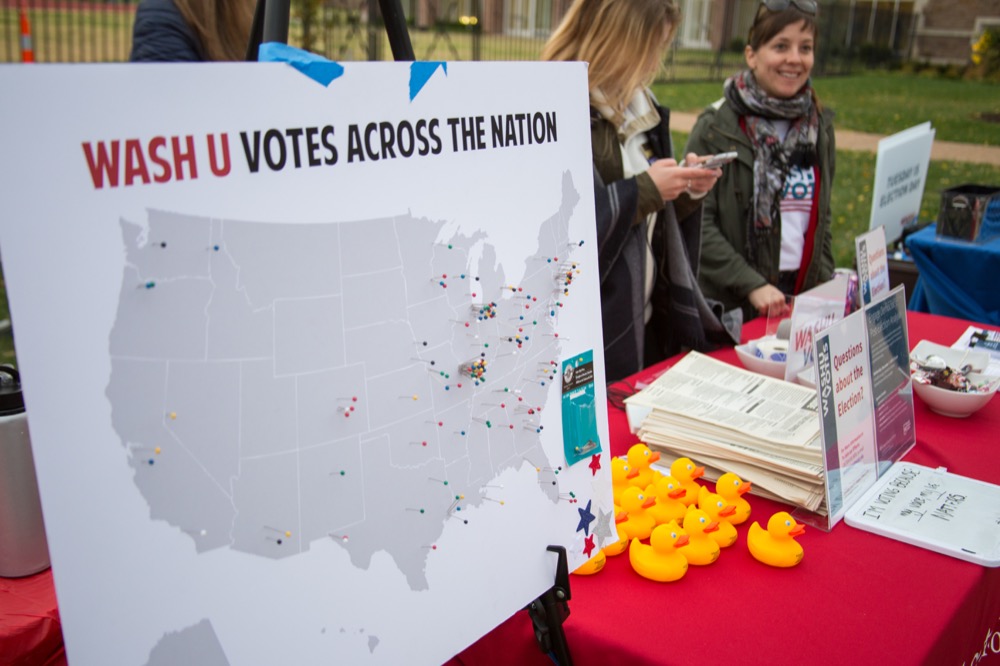 The event was hosted in the Athletic Complex, where thousands of students came to vote in the elections. Polls opened at 7 a.m. and closed at 7 p.m.

WashU Votes handed out free snacks and stickers to those waiting out the two-hour line to vote.

Due to the unexpectedly long wait time, Provost Holden Thorp sent out a University staff and faculty-wide email asking professors to excuse their students from being late or missing classes because of voting.

“Our goal this year was to really increase midterm election turnout and sort of help show students that midterm elections are just as important to participate in as presidential elections,” Scordato said.

Despite the long lines, first-time voter and sophomore Destiny Jackson was glad she voted.

“It took me three hours and thirty minutes,” Jackson said. “Most of [the wait] was just talking to people next to [me] and being like, ‘Oh, we just really want to vote.’”

Sophomore Allison Holleb believes that there could have been a way for the University to account for the understaffed polls. She said that the University should have had more volunteers based on the number of students who registered.

“I know that the number of volunteers that they brought out to the polls was determined by how many people showed up to vote on [Washington University’s] campus for the midterms in 2014,” Holleb said. “I feel like there should be a way for them to do it based off of the number of people who have registered since I know there was such a large spike.”

WashU Votes had been planning the Party at the Polls event for months. In preparation for elections, they reached out to partner with SU.

“We worked really closely with SU,” Scordato said. “They did a great job with publicizing the event and things like that on social media.”

Along with SU, WashU Votes coordinated with campus a cappella groups to perform while the polls were open. They also worked with Pizza at the Polls, a national organization that delivers free pizza to long polling lines.

“We reached out to them to deliver one round of pizza, and then the Gephardt Institute paid for another round of pizza that went through,” Scordato said.

WashU Votes also wrote non-partisan voter guides and hosted activities for students who had already voted, including a photo booth and an interactive map of the United States to show where people had voted.

“We had a lot of students walk by our table talking about how it was their first time voting so it’s always very exciting to hear about that,” Scordato said. “We just hope that people, even if there were long lines, appreciated the value of voting and they’ll continue to do so in upcoming elections.”