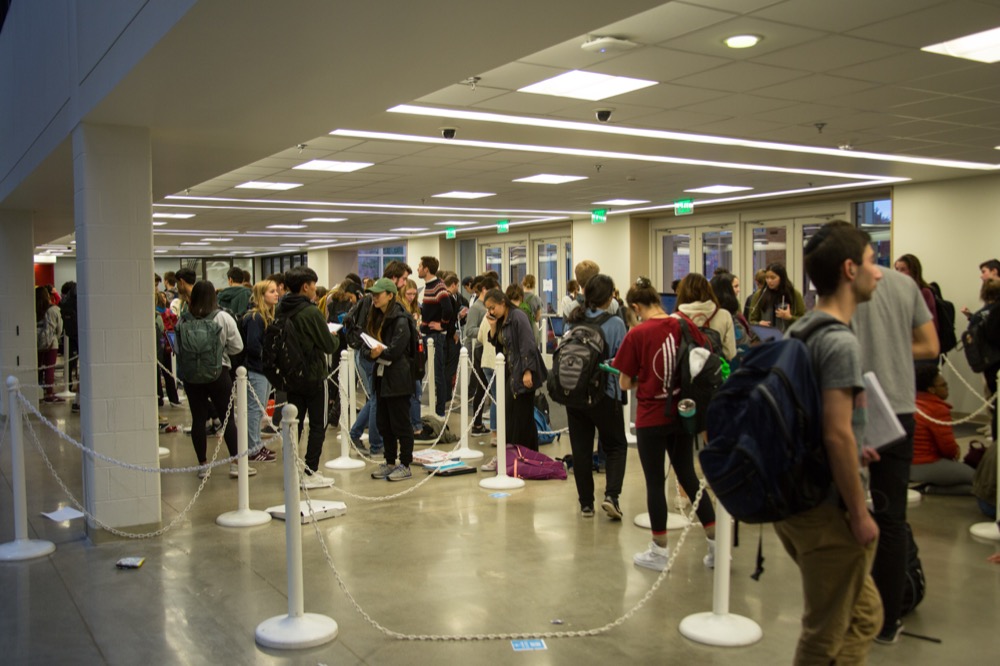 Students wait in line to vote in the Athletic Complex on Washington University’s Danforth Campus on Election Day, Nov. 6. Some students, who primarily live on the South 40 or in the Village, waited up to three hours to vote. The Gephardt Institute held events and performances for students as they waited.

Missouri voters also passed a series of ballot initiatives, including legalizing medical marijuana, an overhaul to the state’s legislative redistricting process and an increase in the minimum wage.

St. Louis County had a 68 percent voter turnout, a slight increase from the 67 percent rate in 2016.

Junior Scott Hershberger said he noticed an increase in political engagement on campus.

“Everyone in our generation is being more politically aware than they probably would’ve been otherwise; so, I think that’s a really good thing, and I hope that continues after this,” Hershberger said.

Freshman Isabela Gallegos, who voted absentee in her home state of Iowa, said she was excited to see Democrats win control of the House of Representatives, and she was disappointed the Senate didn’t also flip.

“That’s really encouraging to see that finally all this work that went into this is coming out at least somewhat positive,” Gallegos said.

Gallegos said that two of the most important issues for her in this election were immigration and health care.

“I think the House can at least make some progress on some of those issues,” Gallegos said.

Junior Sam Heill voted in both the 2016 and 2018 elections and emphasized the personal importance of doing his part to vote.

“I think it’s a very important time for the country with what’s happening, and I personally wanted to make sure that I could do everything I can,” Heill said. “With the Senate race in Missouri so close, I thought it was especially important.”

Hershberger said he hopes student engagement in politics at Washington University will continue.