SU hosted the first Game Day of the season in September outside of the Danforth University Center with game attendance at 2,903. It was estimated that 1,500 people attended the most recent Game Day, falling short of SU’s goal of 3,200—the capacity of the Francis Field Olympic Stadium.

The event featured free food from Mission Taco, a mechanical bull, a DJ, and yard games, while the advertised bouncy house and other inflatables were not used.

Students attending the event said that they noticed a difference between Saturday’s Game Day and the one in September.

“I like this venue better,” freshman Bella Chippari said. “I think it can accommodate more space, we didn’t run out of food, and we got a mechanical bull, so that’s cool.”

“When you see an event where everyone is spread out, you’re not that interested in walking around, right?” sophomore Ben Moore said. “But if you see a large amount of people, you’re more inclined to go check it out. Anything [SU] could do for [greater attendance] would be better.”

SU’s Vice President of Programming sophomore Charlotte Pohl noted that they haven’t yet found the ideal venue size and noted incoherent aspects of the event.

“I think last time it was definitely too small and this time it was too big and I think there was a disconnect between the beer area and the parking lot with the rest of the tailgate,” Pohl said.

Pohl believes that the midterm exams and cold weather affected the turnout in comparison to past Game Days.

“I think something that we struggled with with this one was retention throughout the event, and I think there were a lot of factors contributing to that—obviously, midterm season and the weather,” Pohl said.

The inflatable activities were not available at the event due to the weather.

“The [St. Louis] County inspector came for over an hour trying to wait until the wind would die down enough so they could inflate the bouncy house to inspect it,” Pohl said. “The wind just wasn’t under 20 miles per hour and that’s a law. So we couldn’t really do anything about that which was really disappointing.” 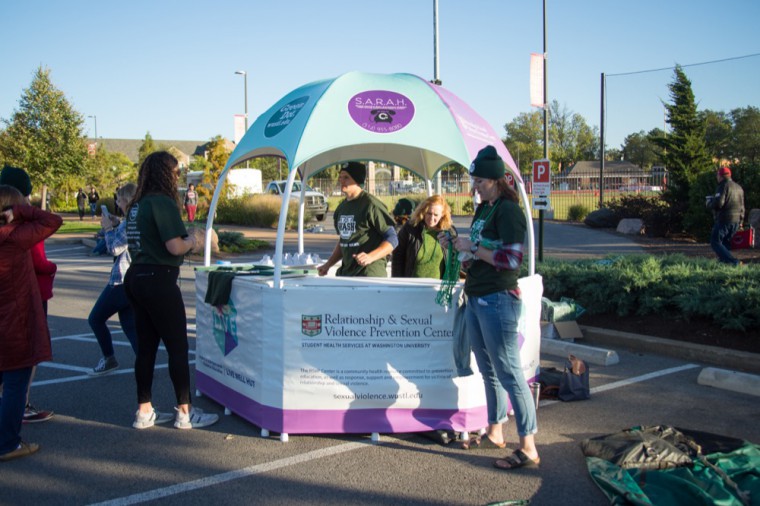 “A difficult thing we face in prevention work is having a stigma of everything being negative and that’s not what we want to do,” Emanuel said. “We want to make it a very positive experience and get people to talk about it and have a good mentality. So, I think doing this work with something very fun and exciting and engaging like the football game and the tailgate is a good way to kind of make it something that people want to talk about and don’t feel uncomfortable talking about.”

“I think the cold weather actually helped us give more of the hats out, which I thought was really cool…Overall, I think it was a really successful event,” Dunham said.

Attending athletes believe that Game Day is a supportive and inspiring campus event.

“It definitely makes a difference having the students and everybody on the sideline being able to cheer us on and support us,” football player and LIVE Sport representative Johnny Davidson said. “It makes us play a little bit harder knowing that our friends are in the stands and we’re trying to make them happy and get the win for them. I know it was a little bit cold out, but students still showed out, and it was great to see them out there.”

“I wanted to come out and show my support,” Morales said. “A lot of my friends are here, so it was a really fun way to spend my Saturday afternoon.”

In the future, athletes and SU members said that they hope to see Game Day expand outside of just football.

“I’d like to see it be more than just football games and I believe that that’s what’s supposed to happen,” Davidson said. “Just seeing other athletes getting supported as well, outside of football, would be great to see.”

SU is planning to host more Game Days this year and has already started planning for the impending colder weather.

“Moving forward, we’re going into basketball season. So it’s going to be much colder and figuring out a space where people will be willing to come whether that be indoors or however we decide to do that,” Pohl said.