WUGWU and SWA move forward with ‘Fight for $15’ 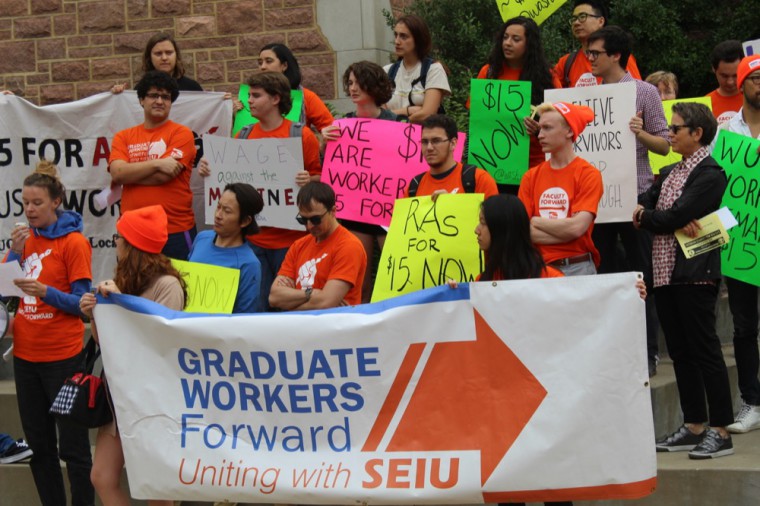 WUGWU protestors gather in Edison Courtyard to advocate for a higher living wage for university employees on Thursday at a Fight for $15 rally.

With chants such as “Get up! Get down! St. Louis is a union town!” and “What’s outrageous? Poverty wages!” the protesters marched through the DUC at noon, circling through eating areas and food stations.

Fight for $15 is an advocacy group for campaigns seeking to establish a living hourly wage for employees. The group is affiliated with the Service Employees International Union (SEIU), which is the group that Washington University Graduate Workers Union (WUGWU) attempted to unionize with last fall. Currently, WUGWU is focusing their efforts on establishing a living wage for all contracted persons on campus.

“There’s a lot of different organizations that are involved with the Fight for $15, and I think that Wash. U. is in a good position to join those organizations and what we’re fighting for: $15 not just for grad workers but for all campus workers,” anthropology Ph.D. candidate Kelsey Nordine said. “We feel that’s a living wage, and it would help sort of deal with some of the economic disparities in the community of St. Louis. That’s why we feel so strongly about it.”

According to Nordine, WUGWU has yet to coordinate with the other campus workers who will be affected by Fight for $15.

“We’re working on that [communication] right now with SEIU folks and our WUGWU people, but it’s sort of a work in progress at the moment,” she said.

The purpose of the protest, according to astrophysics graduate student Ben Groebe, was to draw further attention to the campaign. WUGWU previously collaborated with the Student Worker Alliance (SWA) for a Fight for $15 rally in September.

“We’re here to make noise and get attention,” Groebe said.

After the march, three speakers—including a graduate student, a campus worker and an undergraduate—gave speeches about their experiences with the University as paid employees.

History Ph.D. candidate Brandon Wilson emphasized the impact that a higher minimum wage could have not only on the lives of campus workers, but also for the surrounding communities of St. Louis.

“The Fight for $15 here on campus is a lot more than funding graduate workers’ education. It’s a lot more than funding and supporting workers here on campus. It’s about supporting our city and our democracy,” Wilson said. “Fifteen dollars an hour goes towards funding communities and families like my neighbors who often have to choose between electricity and a gas bill.”

“We all feel really strongly about this because there’s a lot of people that work on campus right now for very low wages,” Nordine said. “We feel it’s important to start closing that gap.”