Andrew Martin, dean of the College of Literature, Science, and the Arts at the University of Michigan, will succeed Mark Wrighton as chancellor of Washington University on June 1, 2019.

Martin, who earned his Ph.D. in political science from Washington University in 1998 and taught at the University from 2000-2014, was confirmed by a unanimous vote of the board of trustees in a special meeting Saturday afternoon. 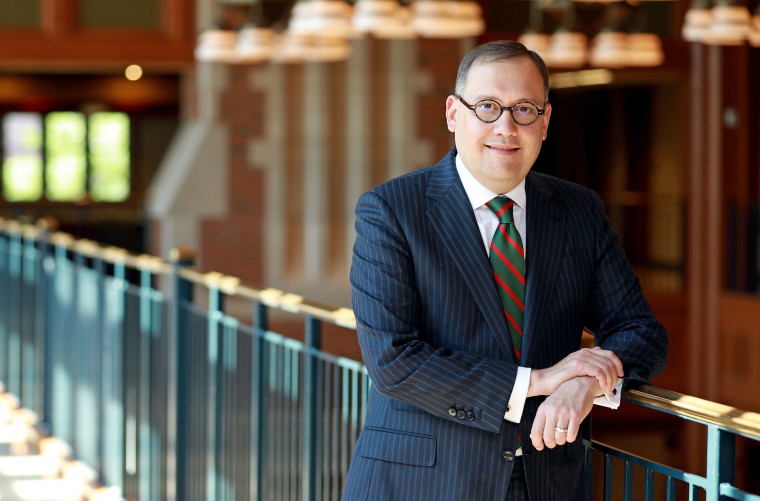 Andrew Martin poses for a photograph in the Danforth University Center. Currently dean of the College of Literature, Science, and the Arts at the University of Michigan, Martin will succeed Mark Wrighton as chancellor of Washington University on June 1, 2019.

According to Chairman of the Chancellor Search Committee Craig D. Schnuck, Martin’s experience at Washington University combined with his track record made him the ideal candidate for the position.

“I think that Andrew Martin will continue the present direction of the school and also has the strong capability of accelerating the progress that we’re making in so many areas,” Schnuck said. “He loves the University, understands its strengths and understands where there are opportunities to make it better. He also loves the St. Louis community and wants to be involved in helping St. Louis progress. He is everything that we’re looking for in a new chancellor.”

As dean at Michigan, Martin oversaw an institution with more than 17,000 students and a more than $1 billion endowment.

Of particular interest to the search committee was Martin’s work on access, diversity and inclusion initiatives in his role as dean. Under his watch, the College of Literature, Science, and the Arts at Michigan designed and implemented a detailed plan aimed at increasing access to various opportunities for underprivileged groups.

“One of the things that’s really important as you think about driving academic excellence further has to do with a commitment to diversity,” Martin said. “At the end of the day, if an institution isn’t bringing the most talented people into the community, regardless of their previous opportunities—whether it’s students or faculty members or staff—you’re going to be a less excellent institution.”

Martin’s hire comes just a year after a New York Times investigation found that, as of 2013, Washington University was attended by more than three times as many children of the top 1 percent of earners as children of the bottom 60 percent, the largest disparity of any university in the nation. It also comes as minority and female faculty continue to be underrepresented at Washington University.

Martin also hopes to expand the University’s efforts off campus.

“Another top priority…is serving the public good,” he said. “I think the University has a special commitment to the city of St. Louis and the St. Louis metropolitan area, but also a responsibility to the country and the world. Over the course of the last 50 years, what I would call the gross campus amount of public service has been increasing year over year and I think that under my leadership we’ll see that continue well into the future.”

Martin’s selection ends an extensive search for a successor to Wrighton, who officially announced his intention to step down as chancellor in October 2017.

“I think it’s important that everyone realize how lengthy, thorough and complete our search process was,” Schnuck said. “The search committee really did its job well.”

Among the four finalists for the position was current Washington University Provost Holden Thorp.

“He did very well, but in everyone’s judgement, [Martin] was the best candidate,” Schnuck said. “The other candidates had never worked at Washington University. The internal candidate Holden Thorp had, but he had had a long career at the University of North Carolina before he came so he had both outside and inside experience, as [Martin] does.”

Thorp plans to remain in his role and assist both the outgoing and incoming chancellors—a task made easier because of his strong relationships with both.

“When I came [to Washington University] [Martin] was in his position in the law school, so I worked with him as we were doing the search for the new law dean that led to Nancy Staudt’s appointment,” Thorp said. “I was able to observe a lot of his skills and when he was a candidate for the job he now has at Michigan he let me know that and we started talking about being arts and sciences deans, which is something he and I have both done.”

According to Thorp, the two have already discussed their objectives for the University in detail.

“He and I have already spent a significant amount of time together once it became apparent that he would be the candidate that was recommended to the board,” Thorp said. “We talked a lot about the academic goals of the University and I wasn’t surprised that he and I agreed on what those were. I knew that from interacting with him before.”

Martin has also sat down with Wrighton to discuss University goals and the transition process.

“I first came to know Andrew Martin when he was on faculty here. I’m proud that, in point of fact, he has his Ph.D. diploma with my signature on it,” Wrighton said. “I didn’t know him then, but I came to know him as he succeeded in his faculty role. It was not until his selection that we engaged and I felt very comfortable talking with him. Just Thursday night we had a one-on-one dinner together and we reviewed some of the important opportunities that seem to be here.”

While Wrighton’s successor has now officially been chosen, he will not step down until next summer, and Martin plans to transition into the role over the course of the year. Although he will continue his work in Michigan until November 4, he plans to move to St. Louis with his wife Stephanie and daughter Olive before spring semester, and hopes to start learning about the position full-time beginning in January.

“[This year], I will be thanking our donors and introducing our new chancellor and I think this will be a great way for Andrew Martin to come to know a lot of people who have been engaged with the life of the University,” Wrighton said. “We’ll also be working through the operational aspects of the job. There are a lot of things to do and you never really know what they are until you get the job, but I’ll be working with him over the next year. I know that he has the capacity to take on this role.”

Martin, at 45, is also comparatively young to be named Chancellor.

“Interestingly, he’s relatively young: He’s almost exactly the same age that Bill Danforth and Mark Wrighton were when they were named chancellor, so he has a chance to serve for a lengthy period of time, which we all believe has been a strength for the university,” Schnuck said. “We have had consistency in our chancellorship and had outstanding chancellors. We weren’t changing directions every five or six years like some universities have.”

Although he won’t participate this upcoming year, Martin also plans to teach students during his tenure as chancellor, which he says is part of his effort to know students on a personal level.

“I will not be teaching undergraduates in my first semester but in my first full academic year I certainly will. You know, I’m going to be very present on campus. I’ll be in the dining halls, I’m going to be at student events. I certainly will have some larger-style interactions, town hall type things, and I will make myself available for students in some sort of office hours.”

Meeting students is just one of the many parts of the job Martin is looking forward to, however.

“This is an absolutely world class university,” Martin said. “I was so proud to be a student here, I was very proud to be a faculty member here. When I think about all the talented people in this place that I had the opportunity to work with when I was faculty member, many of whom are still here, this has got to be the greatest job in American higher education. So when I saw in the fall that Chancellor Wrighton was retiring after a truly illustrious term of service, I honestly thought ‘There’s no way I’m actually gonna get the job.’ But I couldn’t imagine a better place for me and my family to be. I’m absolutely thrilled to be the 15th chancellor and to have the opportunity to come back home to Washington University.”