Student Union has selected five guest speakers for its 2018-2019 Trending Topics series after narrowing down a list of 21 candidates Sunday. 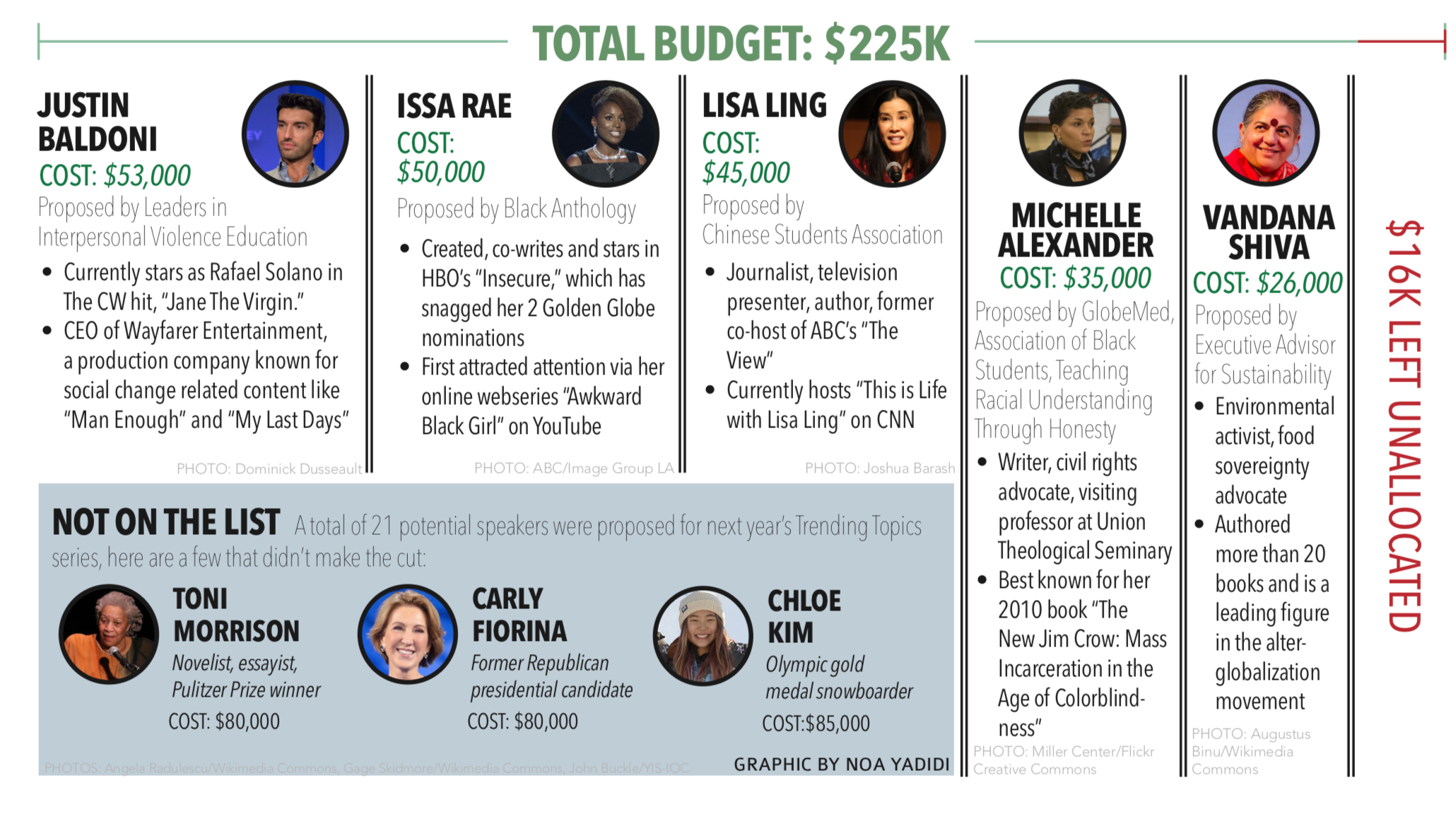 SU Budget Committee Chair sophomore Agneesh Dasgupta is pleased with next year’s selections and hopes that the speakers will create a dialogue among the student body.

“I think we did a really good job at looking at the speakers that we’re bringing as a whole and looking at them as an entire series and seeing what niches they fill on campus,” Dasgupta said. “Five is definitely fewer than we had this year when we had seven, but I’m confident that the ones that we did bring will start conversations on campus.”

Treasury representative junior Bilal Hyder is also satisfied with the list of finalists, though he wishes that SU had used the entire Trending Topics budget to secure its speakers.

“I’m confident in all the speakers that we selected as addressing different topics on our campus that are really important, but I also think that it’s kind of strange to be given $225,000 to allocate towards Trending Topics and leave with $16,000 sitting around—especially because I think the student body expects us to be able to allocate our funds, and that’s what I kind of see this event as being,” Hyder said.

Though they have chosen a final list of guests, SU cannot guarantee that a speaker will appear until after they have signed a contract to come to campus.

“We can’t guarantee that people are coming until their contracts are signed,” Hyder said.

To account for this, SU waitlisted nine candidates, with three top choices: Toni Morrison, author of “Beloved” and “The Bluest Eye;” Carly Fiorina, the former CEO of HP and former running mate of then-candidate Ted Cruz during the 2016 presidential election; and the viral YouTube filmmaking group Wong Fu Productions.

While arguing in favor of Morrison during the Trending Topics selection process, freshman treasury representative Justin Xiong appealed to her strong social commentary and well-known persona.

“She would be contemporary and relatable,” Xiong said. “She has name recognition. She talks about issues in representation in the media and comments on social issues.”

Hyder, advocating for Issa Rae, brought up that inviting a black speaker to campus would coincide with the 30th production of Black Anthology and black students’ acquisition of House 5.

“Not only would it be 30 years of Black Anthology, but also it’d be commemorating the first year that there’s a black house on this campus,” Hyder said.

Of the five speakers slated for next year’s series, Dasgupta is most looking forward to Rae, whose HBO show exploring modern racial issues has received critical acclaim since its premiere in 2016.

“She’s probably the one I’m most excited about—the stuff she’s accomplished and the content that she’s made. I think people are going to be really excited about her,” Dasgupta said.