Student Union announced results of its spring election Wednesday, with drops in both the number of candidates and voter turnout reflecting decreased student engagement with SU. 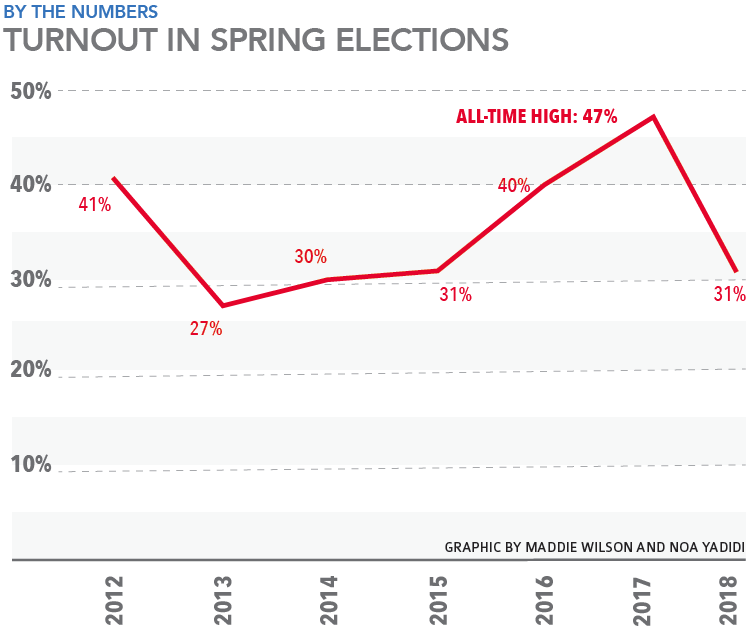 “I’ve been in SU for almost four years, and in my time there’s always been one person running for each position,” senior and election commissioner Keaton Schifer said. “I’m not going to speculate exactly why no one decided to run for finance or programming, so I guess it’s just kind of the way it is.”

“Inauguration is going to be the first Friday after spring break, so that’s when the new exec will come in. I’m assuming that they’re probably going to want to have at least someone in the pipeline, if not approved already to begin at inauguration,” he said. “The timing could definitely be different, but that would be my guess.”

VP Programming also had no official candidate on the ballot, but freshman Charlotte Pohl, current vice president of the Thomas Eliot Residential College, received 80 votes for her write-in campaign and will serve in the position next year.

“Right now, I’m just getting settled with the transition and setting up meetings because there’s a lot of people I haven’t even met yet,” Pohl said. “I’m in charge of advising the class councils, so I want to…give them a bigger [voice] because sometimes they’re overlooked…but right now I’m just really working to get to know my position.”

Kish and Mather, both of whom previously served on SU, ran uncontested for their respective positions of VP Admin and VP PR.

“I think that this team is one of the more diverse teams since I’ve been here. I think that what that will bring is a lot of different viewpoints,” Mather said. “Ultimately, with my platform, I really want to push for more of an internal look at SU and internal rebranding of what we do in terms of our brand, of how internals work and how to reach out to students.”

“I think we have to work on both ends of [recruitment and retention] really hard, as we saw with the lack of people running in this year’s elections across the board and just other kinds of issues that we’ve had with resignations and things like that,” Kish said. “I think that we really had to focus on one, recruiting people that represent the widest array of voices possible on our campus from every corner and two…we need to focus on keeping those people.”

Kish emphasized his goal of making Student Union more accessible to the student body by addressing the internal relationships between the different branches.

“Fostering an environment that is conducive to advocacy by sharing information across SU [is important to me] because you’d be surprised at kind of the small things that impede us from doing that now,” Kish said. “I really want to drive those barriers down to information within SU about what everyone else is doing and really foster some of that better communication.”

The office of the presidency, contested by three candidates, was captured by Egbo. Egbo—who previously served two terms on Treasury—intends to focus on the transparency of the office and hopes to engage with minority voices on campus to ensure SU is serving the entire student body.

“The whole campaigning journey has been really an experience to remember,” Egbo said. “I learned a whole lot about myself, and I learned that I should never give up on what I really believe in.”