Student Union cut $644,353.67 from the general budget requests for student activity funding, slicing money from requests made by Student Union entities and campus partners, based on recommendations from joint Senate and Treasury bodies yesterday. 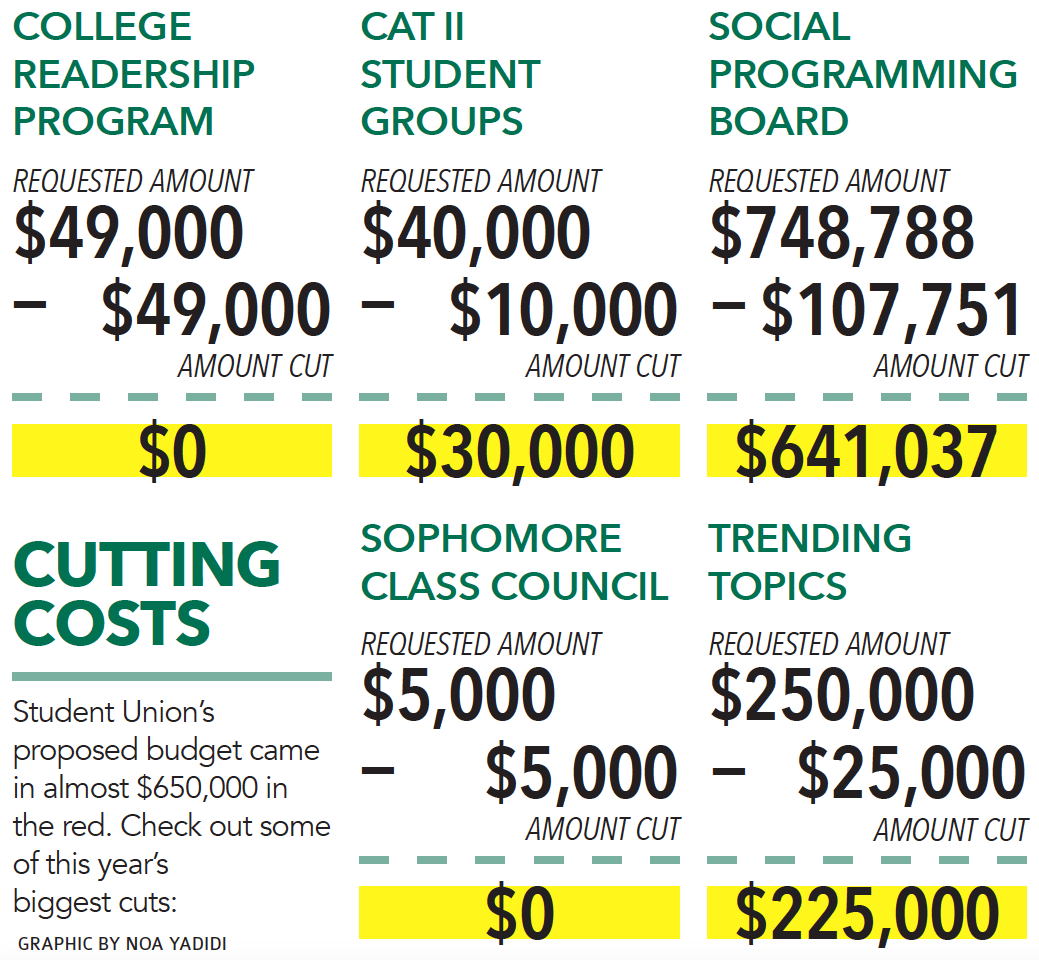 “Last year, they overestimated the amount of students who would be here and paying the student activities fee,” SU President and junior Sydney Robinson said. “So, this year we had to have a bit more of a conservative number for the budget.”

With approximately $650,000 to cut from the general budget, Senate and Treasury looked at each line item critically to propose recommendations for the final budget.

By the end of the night, the joint bodies were narrowly able to achieve quorum. After over 15 hours of discussion, Senate and Treasury approved Ragnone’s $3.3 million balanced budget, allocating the following:

Each class council, which implements programming specific to its respective classes, met a different funding outcome.

The First Year Class Council for the class of 2022 received $1,000 in funding to kick off programming initiatives early in the year.

“How they choose to program with that money is totally up to their discretion,” SU Vice President of Programming and junior Kyle Jeter said. “I think that was a good move because something we’ve noticed year after year is that class councils take a while to transition into programming.”

The class council for the class of 2021 received no funding from the general budget due to a budget request that, according to Senate and Treasury representatives, lacked specificity and organization. The incoming sophomore class council will have the opportunity to secure funding through SU exec appeals.

Class council for the class of 2020 was nearly fully funded at $2,522.19 for specific programming, including a trip to Eckert’s Farm and a beginning of the semester “kickoff.”

The requested budget for the class of 2019’s class council stirred up discussion surrounding socioeconomic diversity of the student body and accessibility to different opportunities. The class council requested funding for Senior Week and a senior trip to Chicago. Members of Senate and Treasury discussed, then recommended subsidizing these events to make them more accessible for a wider range of students.

The joint bodies decided on an $8 subsidy for each ticket and full funding for 16.67 percent of students, which will secure tickets for low-income students.

“We want to make sure that everyone has that chance [to experience senior week and senior trip] if they want to because I think feeling a part of your class is integral to your Wash. U. experience,” sophomore Senator Carolyn Perlmutter said. “There shouldn’t be an economic barrier to that.”

Freshman Senator Mia Hamernik felt that on socioeconomic equity ought to be an objective for the entire session, not just class council discussions.

“Something I try to be more conscientious of is students that come from lower income backgrounds, because when we’re dealing with several million dollars and trying to allocate that, we need to keep in mind accessibility of the different things that we are providing money to,” Hamernik said.

The debate on WILD funding

This year, Social Programming Board’s requested budget reflected intended shifts in programming, including general budget allocation for special programming and an increase for WILD talent by $25,000 per concert. In total, SPB requested $748,788.23 and was funded for $641,037.89.

SPB requested an increased budget for booking WILD talent to raise the caliber of the artists at each concert. Senate and Treasury voted with a recommendation to fund one WILD at $125,000, while keeping the other at $100,000, as a trial to see how SPB would use the increased funding to improve WILD.

Ragnone altered the joint bodies’ recommendation by funding each WILD talent line-item at $116,598.95 to achieve an overall increased budget, while maintaining balance for the year across SPB programming.

“I think [Senate and Treasury] came to a conclusion that allowed SPB to take some more initiative and to grow as a body in terms of their allocating potential,” Ragnone said.

“That’s definitely going to show us if that extra money really does make a difference,” Jeter said. “The inflation rate is real and the talent we’re going to be able to get with a bigger budget, knowing some of the people we got quotes on, is going to be a lot better.”

Most of the cuts to SPB’s proposed budget came from a series of specific line-items. Senate and Treasury recommended to cut SPB’s Labor Day Weekend Concert, one of the larger cuts made to the SPB budget.

Where did major cuts take place?

Most cuts were made through combined efforts between Ragnone and the joint SU bodies to remove specific line-items throughout the budget.

Beyond sophomore class council and SPB, major slashes came in the form of defunding the College Readership Program, decreasing funding for Category II student groups and decreasing the budget for Trending Topics.

“This year is the year that we’ve had to cut the most out of the general budget,” Ragnone said. “We’re seeing a huge increase in the number of student groups and the number of funding requested year to year, so looking into the appeals account and the student group budget reserves was really important to look holistically to see how we can best accommodate the rising demand for funds.”

The Collegiate Readership Program, which brings print editions of The New York Times, the Wall Street Journal and USA Today to campus, was funded at $0, freeing up $49,000.

While Ragnone announced the cut in her final budget proposal, she promised the joint bodies that she would look into a more affordable way to bring a similar program to Washington University’s campus.

“I’m going to get in contact with The New York Times tomorrow and get a more cost-effective option on the table,” Ragnone said.

Category II student groups received 75 percent of their requested budget, with an allocated $30,000.

Another cut that sparked debate was a $25,000 reduction in the Trending Topics budget, which is now allocated at $225,000. Despite the slash, Ragnone does not expect an impact on Trending Topics programming.

What entities got the most funding?

Diversity Affairs Council was funded at over $4,000, alongside other student groups and events rooted in celebrating diversity and inclusion, like Destination Q, Affinity Group and Identity Based Event Fund, LGBTQIA Student Leader Conference and Multicultural Conference Fund.

“I was really happy to see some of the conferences for some of the marginalized groups on campus get allocated,” junior and Senator Joey Vettiankal said. “I think that’s really important, and I think a lot of the time how SU shows up is not always evident. And I know in the past we haven’t always shown up for others, especially marginalized students, so that’s a step in the right direction.”

Leaders in Interpersonal Violence Education (LIVE) received funding at over $2,000 for 13 separate events. While SU voted to cut LIVE’s proposed budget, which originally included 24 events total, it effectively increased LIVE funding from past years—more than doubling the group’s programming abilities.

“I think that was the right decision not giving them all 24,” junior and Speaker of the Senate Brian Adler said. “It’s hard not giving a really good group like LIVE all the events that they want, but I still think we were able to find a good balance where they were able to expand not at too quick of a rate where they might crumble upon themselves.”

“Senate and Treasury did very well,” Ragnone said. “I think they had a lot of great conversation around the events and I think we have a budget that we are all really proud of.”