Cafe Bergson will now serve hot food over the weekend so there are more meal options available for students and visiting guests.

According to Bon Appetit Director of Operations April Powell, Cafe Bergson decided to offer a hot meal option because the Danforth University Center is not open for lunch over the weekend and the meal services on campus needed to accommodate for the increases in weekend admissions visitors. 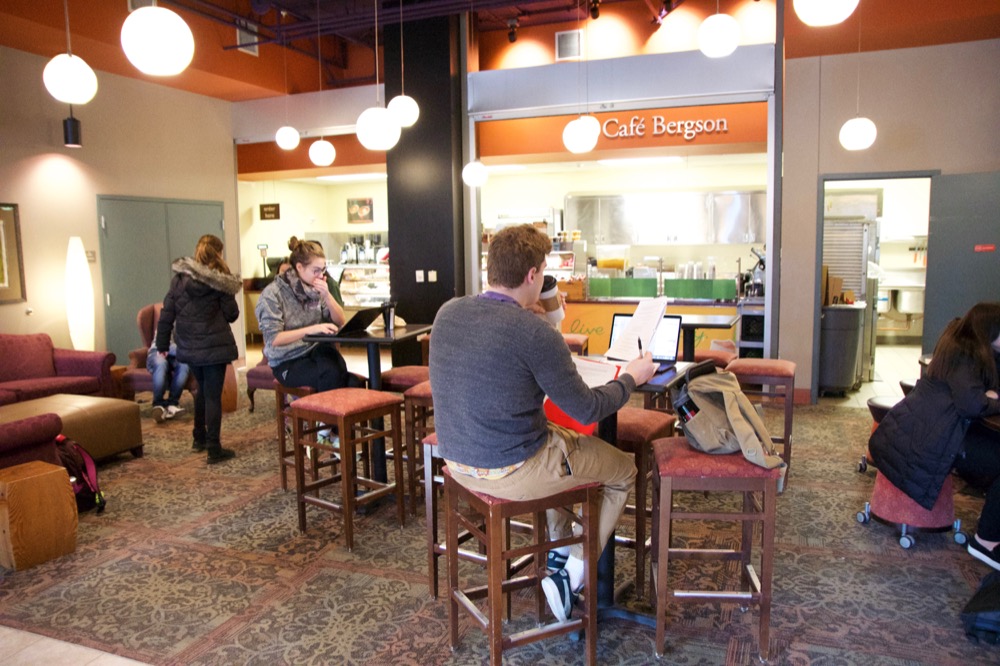 Students study in Cafe Bergson, located in the Danforth University. In response to an increase in weekend admissions visitors, Cafe Bergson has expanded its food offerings to include hot meals, such as soup and sandwiches.

“We always get asked if we have anything [in the way of] hot food or if the prepacks are the only thing we have, especially if we have the parents here for the tours,” Ferguson said. “They’re always looking for something hot to eat and we have to send them somewhere else because we don’t have anything but cold prepacks.”

Ferguson hopes the new hot food service will be popular among students as well.

“Especially now that Whispers [Cafe] is open, we’re not as busy because [students] go over there and grab coffee and pastries,” Ferguson said. “I think we need something in here that will draw [students] back over here.”

Although Cafe Bergson started its hot food service a few weeks ago, it does not yet have an established schedule.

“Because [the consumer] volume fluctuates and is not consistent, this practice has not been made standard. However, we are always happy to explore whether it warrants becoming a more frequent feature among the cafe’s weekend offerings,” Powell wrote in an email.

Ferguson believes the service will remain as only a weekend feature due to the DUC’s many offerings on the weekdays. She believes the types of meals will be something simple to prepare in the cafe’s hot pots.

“It’ll probably be soups. One weekend we did a pulled pork sandwich. [The meals will be] something that can be quick but hearty,” Ferguson said.