The cafe first opened in 2003, when a donor made contributions with the hopes of creating a coffee shop in the library that could also serve as a cyber cafe.

The latest round of renovations began in August 2016, and the $20 million project was originally slated for completion this fall, but progress was halted last September after workers uncovered a rock shelf beneath the site. 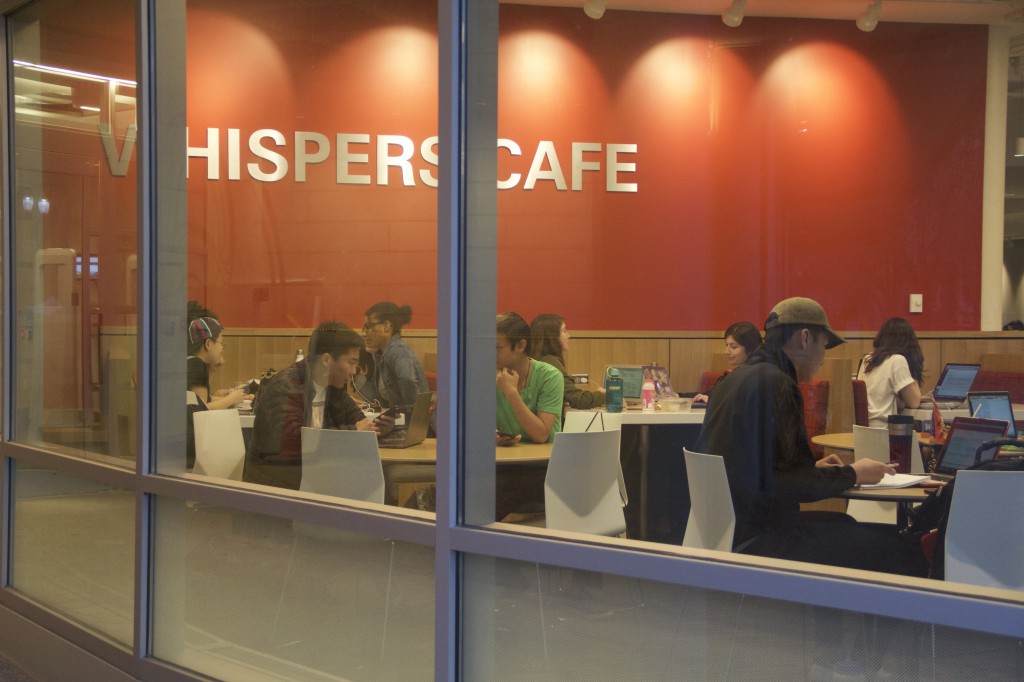 Once Washington University decided to remodel the library—the University announced the renovations in summer 2015—the builders began to think about how they wanted to renovate the cafe.

“If we are going to rebuild it, what have we learned from the past (from these first two versions of Whispers) and what are we trying to accomplish? And how do we do that?” Danforth Campus Dining Services Manager Paul Schimmele said.

High traffic at Whispers demanded up to four trucks-worth of deliveries each week. The builders and Dining Services decided it would be better if a bigger storage room, invisible to customers, was built, preventing the multiple daily deliveries.

“From a consumer facing standpoint, largely, the footprint of Whispers did not change,” April Powell, the director of operations for Dining Services, said. “A big part of what changed at Whispers is the offerings.”

“We [also] have so much more space now and that helps us, especially with restocking,” Bob Marx, general manager of Dining Services, said.

Whispers still offers grab-and-go options, along with coffee and espresso. Cold brew coffee and the Firepot Nomadic Teas collection are new editions and both are exclusive to Whispers.

“There are the ritual teas, which are the teas to-go in tea sachets (tea bags) and then the experience where you actually get a pot of tea to sit,” said Powell.

Dining Services was surprised at the immense popularity of Whispers, even before this recent renovation.

“We were just reminiscing the other day at the reopening when the espresso machines were selected for that location when it first opened. After several months, they were starting to burn out. And [students] drink a lot of coffee because we learned in the first three or four months—we had already cycled enough times to be comparable to a year’s worth of use someplace else,” Schimmele said.

The new, exclusive menu items and convenient location have driven enthusiasm—both for those who attended Washington University when Whispers’ previous iteration existed and those who did not—about the opening of the renovated cafe.

“It is definitely a destination because so many people [go there], whether you like the Firepot tea or the cold brewed coffee,” Marx said.

Students who visited Whispers in its first week expressed excitement about its update.

“I absolutely love the community feeling of Whispers; it’s a great place to meet up with people as you are taking a break from studying in the library or on your way to your next class,” sophomore Sema Dibooglu said.

“Whispers is a lot different,” junior Varun Lahoti said. “The new amenities are especially nice, like the tea service. Also, Whispers now has adequate space for people to sit and work. More often than not when I was a first-year, Whispers was congested, and there were no seats. Now, it’s the exact opposite. Also now that Whispers is open there’s a place—a central place—to get coffee late at night.”

Still, some upperclassmen are underwhelmed by the renovations.

“While I guess the new seating is nicer, it does actually seem like less seating than before,” junior Sydney Curtis said. “And if all we got out of the wait was transparent tea pots and more power strips, that is maybe not worth it.”