‘A slap in the face:’ How the Republican tax bill would affect Wash. U.

The U.S. Senate passed a sweeping tax reform bill which would implement taxes on earnings from university endowments in a heavily partisan 51-49 vote Saturday. The bill, called the Tax Cuts and Jobs Act, will now be reconciled with the House version of the legislation, which passed in mid-November and includes the tax on endowments while adding a further tax on graduate student tuition remission.

This provision in the House bill would designate graduate student tuition that universities remit through scholarships as taxable income. Graduate tuition at Washington University currently costs $50,650, equal to undergraduate tuition, but since the majority of graduate students at Washington University receive some form of tuition remission, the bill would drastically increase taxes paid by many students. 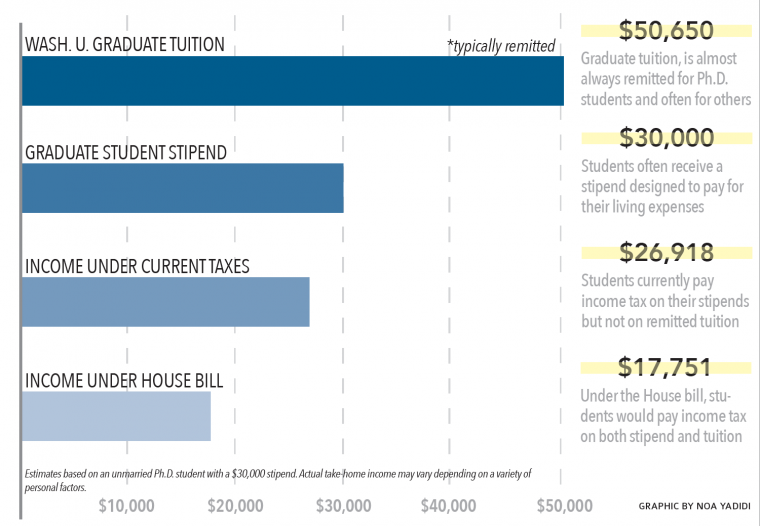 Around 1,800 doctoral candidates at Washington University currently receive full tuition scholarships, and in almost all cases, they receive a stipend for living expenses from the University so that, in theory, they can study without needing to supplement their income. These stipends can range from $22,000 to $35,000 per year, depending on the program, and are currently taxed as income. Neither bill proposes significant changes to this stipend tax.

What this ultimately means is that, for many students, taxable income could more than double. A typical unmarried Ph.D. candidate, whose full tuition is remitted and whose stipend provides them with $30,000 per year, for example, would see their take-home income after taxes drop from $26,918 per year to $17,751 per year.

Both taxes proposed in the House bill has been met with anxiety and outrage from administrators and students on campus.

Chancellor Mark Wrighton encouraged students to contact their elected officials about the bill in a letter to the University community Nov. 17.

“As I have shared directly with our elected officials, I am extremely troubled by a number of provisions in the proposal that would directly and negatively impact universities like ours and impede our ability to serve our students and society,” Wrighton wrote. “Many of you have expressed a desire to similarly voice your opinions about the proposed tax legislation. I would certainly encourage anyone wishing to communicate with members of the House and Senate as a private citizen to do so, and quickly.”

“We are deploying spendable income from the endowment to support, for example, need-based financial aid, graduate student programs, faculty research and compensation, and more,” Wrighton said. “So our money is fully deployed. There’s a feeling that we’re hoarding money, and that’s far from the truth…We’re using our endowment, and if there’s the introduction of a tax,in order to be disciplined in terms of our finances, it just means we have to slow the rate of progress in terms of what we’re able to do for students.”

Despite this opposition, and the fact that both the House and Senate bills include the endowment tax provision, the University’s lobbying efforts focus on countering the provision in the House bill that places a tax on graduate students’ remitted tuition.

“Our efforts are to make sure that the Senate version that does not include [the provision] is what goes through,” William Tate, dean of the Graduate School, said. “That’s what you want to see happen because the alternative [House bill] is not very positive for any party here. It would change the model of not just how Washington University, but every major research university in America, deals with graduate education.”

“Our government relations office is obviously in [Washington, D.C.] talking to members of Congress about the bill and arguing that this would be a negative effect on not just Washington University, but Vanderbilt, Stanford, Harvard, Princeton, etc.—all of us would be in a bad situation,” Tate added.

In addition to University-led lobbying efforts, students themselves have also attempted to organize against the bill, according to Graduate Professional Council president Alan Zhang.

“We have two main grad student groups. Schoolwide is Graduate Professional Council, which oversees all 7,500 grad students. There’s also Graduate Student Senate, which oversees 3,000 or so students,” Zhang said. “Both of us have been organizing call days to call the reps, not only in Missouri but also in D.C.”

Both students and administrators, therefore, remain hopeful that the bill will be passed without the provision taxing remitted tuition. Nonetheless, some students have already started planning for the possibility of the provision being included in the final legislation.

“I’m in an interesting position because I’m currently a master’s student, and I’m applying for Ph.D. programs this cycle. So, I am facing the decision myself of whether or not to pull out of my application and apply to industry,” Zhang said.

Others, meanwhile, haven’t been able to form any plan.

“If the tax bill passes and the current provision from the House is kept regarding graduate students, then basically, I don’t know what I’m going to do,” comparative literature Ph.D. candidate Asher Gelzer-Govatos said. “It would raise me from low-income tax level, almost to the $100,000 tax bracket…That would not be good. I would not be able to pay that.”

The bill would also make graduate-level education at Washington University more expensive for prospective future students, a fact that both students and administrators feel would hurt the program.

“I think the tax bill is going to make it very difficult for a lot of students to even consider graduate education,” Gelzer-Govatos said. “I think it would be bad for the University because it would screen out, to a large degree, people who are already screened out by the grad student process, especially people from lower-income backgrounds—there aren’t as many lower-income students in graduate school. I think they’re going to be hit hard by that; so, I think it’s going to exacerbate an already existing problem.”

“If you’re thinking about going to get a Ph.D. and your package was a tuition scholarship and a stipend, and you were going to be taxed like that was $80,000 of money, would you—in a great economy like we’re humming along in right now where there are job opportunities for talented people—would you take a job that was actually paying you $80,000 or would you take the job that is really a stipend of $22,000 and tuition of $50,000? If you were rational, you would probably take the $80,000,” Tate said.

Because of the financial challenges posed to graduate students by the bill, Washington University would likely enact some form of plan to shift the costs from the students themselves to the University, according to Tate.

“It would be unwise for me to describe what our plan would be while we’re in the middle of a fight—because we are in a fight—to kill it,” Tate said. “I know some students are worried that their life course would be changed dramatically, but I want to emphasize that we’re doing everything we can so that none of us is in a position [if the bill passes with the provision taxing remitted tuition] where we have to announce some kind of major shift in what we do.”

With measures like these, Gelzer-Govatos believes that graduate education at the University can continue but would be significantly harmed.

“I don’t think I’m a believer in the absolute worst-case scenario that graduate education is going to be dead in America. I don’t think that would happen under any circumstance. But I do think it would have a very negative impact on people willing to enter graduate school,” he said. “I do think graduate students are real people with real life situations and real complicating factors. A lot of us have families and children, and we’re already having to juggle a lot of things to make life in graduate school work. So, I think the tax bill really feels like a slap in the face to those of us who are already juggling those things and trying to make it work.”