The Association of Latin American Students organized a peaceful protest against the Trump Administration’s proposal to end the Deferred Action for Childhood Arrivals program Friday, Sept. 22.

The event was part of the Hispanic Heritage Month celebration organized by the group, which runs from Sept. 15 to Oct. 15. 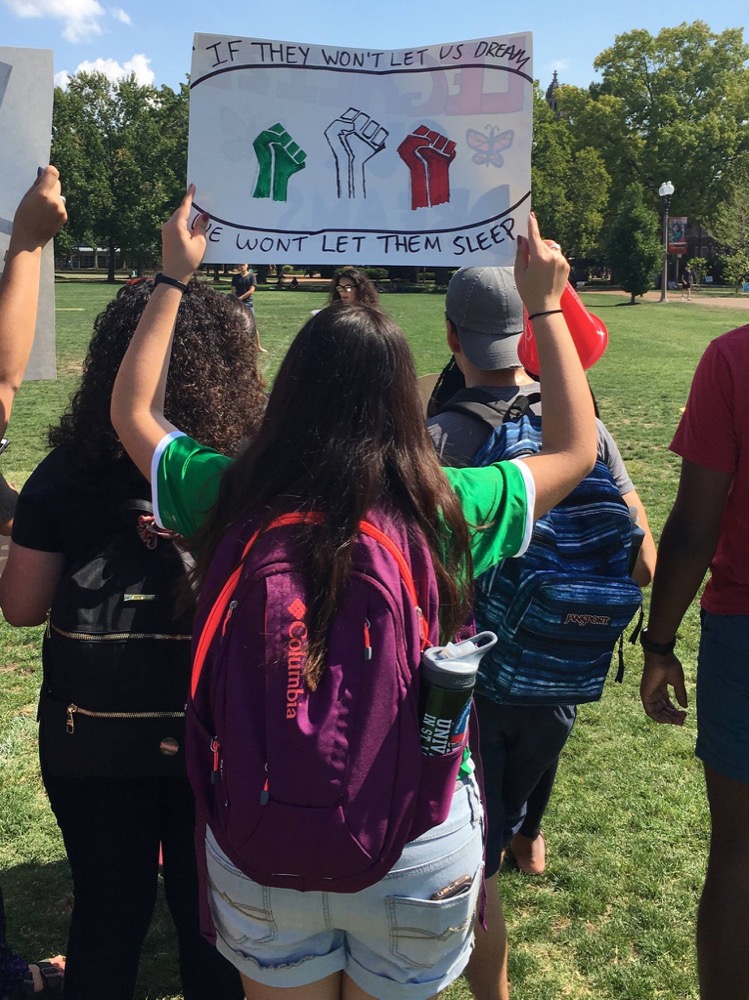 Students raise signs in protest of the Trump administration’s decision to roll back DACA as part of ALAS’ Hispanic Heritage month programming.

As part of this goal, the Association of Latin American Students (ALAS) organized the protest in order to support Latinx and other students affected by the proposal to end the Deferred Action for Childhood Arrivals (DACA) program. In this regard, co-president of ALAS and senior Drea Gonzalez felt that the protest was a success.

“We weren’t worried about numbers; we were worried about the quality over the quantity,” Gonzalez said. “We wanted people who were there to be in support of the fact that we do not agree with the Trump Administration’s [decision] to wind down DACA. Our voices need to be heard and our voices matter.”

The protests were open to everyone in the Washington University community, not just ALAS members themselves, and many non-ALAS members attended the protest. Some posters at the protest read “Build Bridges, Not Walls,” “Protect Immigrants” and “Stop Pretending Your Racism is Patriotism.”

While DACA disproportionately affects the Latinx community, the protest aimed to support all those who the proposal harms, according to ALAS co-president and sophomore Jasmin Delgado.

“Even though ALAS is a support network for Latinx, we feel it is our duty to be very inclusive because we know what it is like to feel left out. And DACA [serves as] a good reminder that we are here for everyone and not just ourselves,” Delgado said.

“Our main event this year was DACA week, which ran from Sept. 8 to Sept. 22,” Cortez-Lopez said. “We put on events to educate the Wash. U. community about DACA [what] is and who is affected by it. ALAS put on multiple call-in events and community building activities on campus.”

ALAS also brought speakers to campus who gave presentations regarding the effects that the DACA decision had on them. Two such speakers were Kenneth Schmitt, an immigration lawyer who explained the legal concerns surrounding DACA, and professor Virginia Braxs from the Department of Romance Languages and Literatures who recounted her experiences working with the undocumented immigrant community in St. Louis.

The full list of events taking place for Hispanic Heritage Month can be found in full on the ALAS website; washualas.weebly.com.