After placing second at the Science Olympiad State Championships on April 8, the Wydown Middle School science olympiad team, coached by Washington University undergraduates, will advance to the 33rd Annual Science Olympiad National Tournament for the first time in team history May 20.

The science olympiad team, which operates under the umbrella of Campus Y, is comprised of students from Wydown Middle School, a nearby school that is part of the Clayton School District, and 30 undergraduate students serve as coaches. 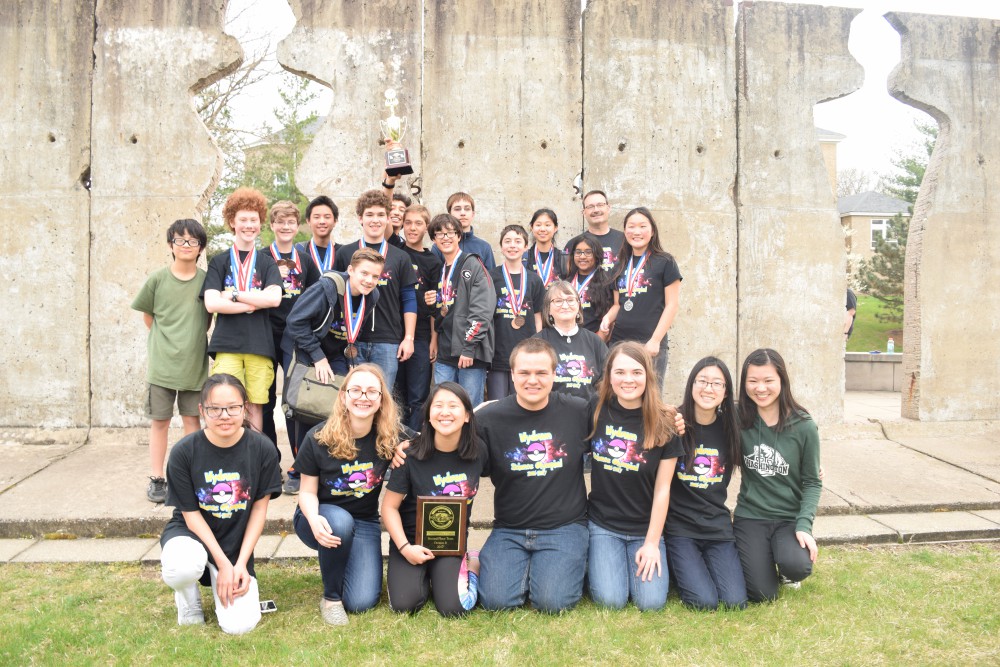 The coaches of the Wydown Middle School science olympiad team pose with the team’s members. The team, which was initially introduced four years ago due to Washington University student interest, will be attending its first national competition May 20 in Dayton, Ohio.

Science olympiad was introduced at Wydown Middle School four years ago by Washington University students in an effort to foster intellectual curiosity within the sciences and allow middle schoolers to compete in olympiad tournaments.

In recent years, the team has placed third at the state competition, which is one place below qualifying for nationals. This year, the team placed second for the first time and will be attending the national competition, set to take place in Dayton, Ohio. Sophomore Victoria Grabinski, a program leader, expressed the team’s surprise at their strong showing in the championship.

“It was just really exciting because the kids were so happy about it,” Grabinski said. “Also, I don’t think anyone went in really expecting to go to nationals, so it was really just a big surprise, and I think a really good testament to the great set-up we have with all the Wash. U. coaches and how hard the kids have worked this year. And we are really proud.”

The team implemented several structural changes to their program this year, including assigning partners earlier in the semester so that the students could work with the same group for a longer period of time. Senior Emily Wen, a program leader, credits the group of coaches for the success of the team in addition to the middle schoolers.

“We did a lot of structural changes this year, but also, definitely, we had an amazing cohort of coaches this year,” Wen said. “We just had so many [who] had done science olympiad before and had a strong interest in helping us. We finally had a lot of help with building events, which were our most difficult events to actually do well in.”

Junior and program leader Thomas Van Horn discussed what the next few weeks will look like for the team and their coaches, explaining that much preparation is necessary for the continuation the team’s success.

“We asked all of our coaches to come back up until reading week, and I think that all of the coaches have decided to come back,” Van Horn said. “We’re putting in extra meetings, but it’s totally worth it, and I think we are all going to be able to go to nationals now. Even some kids that were in the program one or two years ago are going to come with the team to Dayton, and one of the founders of the program is coming to Dayton as well—it’s going to be a great time.