After a years-long hiatus, Visions Gospel Choir has returned to campus under new leadership and with a new image. In the group’s Easter concert, titled “Revolution,” the student-run group performed for students and Washington University community members in Graham Chapel Sunday.

Founded in 1977, the choir has undergone several changes in its 40-year history. Initially, two Washington University undergraduate students held informal prayer and worship nights in the basement of their residence hall. Over time, more students gathered and participated, leading to the formal establishment of the choir that same year. According to junior Akua Owusu-Dommey, director of Visions, the choir performed exclusively for members of Harambee Christian Ministries prior to its 2014 reestablishment. Harambee, a Student Union organization and one of the Washington University chapters of InterVarsity Christian Fellowship/USA, was also established in 1977 by the same students who participated in Visions. 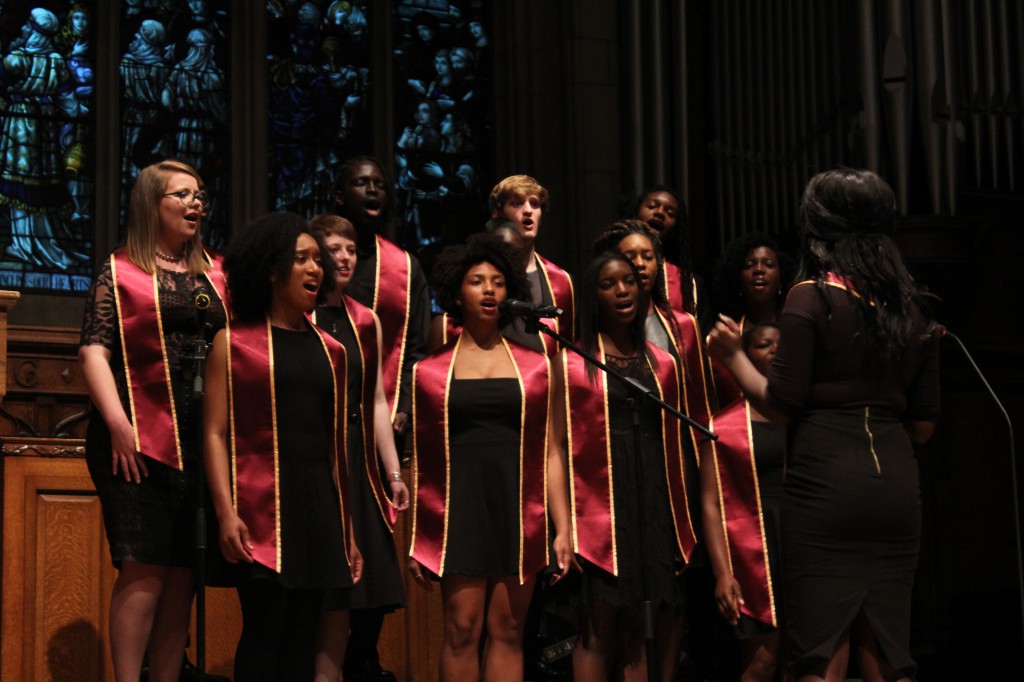 “We’re still fully and completely under the [Student Union] group Harambee Christian Ministries, just because that is our history,” Owusu-Dommey said. “They’re our brothers and sisters. That’s who we are.”

Along with junior and Assistant Director Jae Williams, Owusu-Dommey revitalized the group at the beginning of the 2014-2015 academic year. During its first semester back on campus, the choir had only six or seven participants and a limited operating budget. Since then, Visions has doubled in size and now boasts 14 singers and three instrumentalists. In addition to acquiring new official uniforms (maroon and gold stoles), the choir now performs its concerts in Graham Chapel.

Visions strives to create a welcoming and inclusive experience for all, while also maintaining the choir’s foundation in Christianity, according to Owusu-Dommey. By incorporating dance and spoken word pieces into their concerts, audience members can connect in a variety of ways to the performances.

“I think we’ve always tried to make it more than just the music. We also always try to have an audience song, just to keep it light and make people feel welcome and not necessarily like, ‘Oh, if you’re at this concert, you must be Christian,’” Williams said. “WE want to make sure this touches as many hearts as possible through all of the forms available to us.”

The concert’s title, “Revolution,” conveys the group’s belief of what an Easter message should be: a revolution for all of us on earth to enjoy, according to Owusu-Dommey.

The performance featured 13 songs, including famous gospel hits such as “Agnus Dei” and “Your Majesty.” The concert was interspersed by monologues read by sophomore Chris Blake and senior Corban Swain. The monologues, written by playwright Glenn A. Hascall, were intended to share the perspectives of biblical figures who may have been present during the resurrection of Jesus Christ. In addition to prayer and reflection led by Pastor Jonathan Thomas and Latrice Lee of Destiny Church, the evening was marked by an all-female rendition of “Give Me a Clean Heart,” featuring a dance performed by tenor Vincent Harris.

Junior Lauren Johnson, who attended the concert, enjoyed the performance both for its entertainment quality and emotional impact.

“I thought it [was] a very dynamic performance. And it was able to evoke a lot of emotion from the audience on different levels,” Johnson said. “It’s amazing to see all of the talent on campus, and it was perfect timing in celebration of Easter. I’m glad we were able to have a wonderful worship night to celebrate that.”

Junior Solome Haile, who was also in attendance, felt that the performance utilized a variety of techniques effectively in conveying its message.

“I really enjoyed how they were able to weave in multiple artistic elements with dance, dramatic story sharing and also the songs. And even just the instrumental music in the background worked together to create a great depiction of all that Easter is,” Haile said.

As Owusu-Dommey and Williams prepare for their senior year, the two hope to strengthen the group from within by building an executive team for next semester.

“We’re hoping that it stays as strong as it is now. The biggest challenge for us going into our senior year is telling people and showing them within themselves that they’re capable of keeping this choir great,” Williams said. “If we show them, then they can show others and keep bringing people into this space so that when we come back, we can come back to Visions as well.”