Washington University released a new parking plan for the 2017-2018 academic year April 10, laying out a plan to distribute permits among students and faculty through a lottery system.

Those planning to park on campus will need to enter the lottery—which will open April 17 and close April 28—to receive a permit assignment. In addition to the lottery, the parking system changes will include a major shift to a zone system, a shift that will mean yellow permit holders can only park in the zone they are assigned to. There will be five parking zones: the East End (Zone 1), the South Core (Zone 2), the North Core (Zone 3), the South 40 (Zone 4) and the North and West campuses (Zone 5). Parking in the East End will be closed due to impending construction on that side of campus. 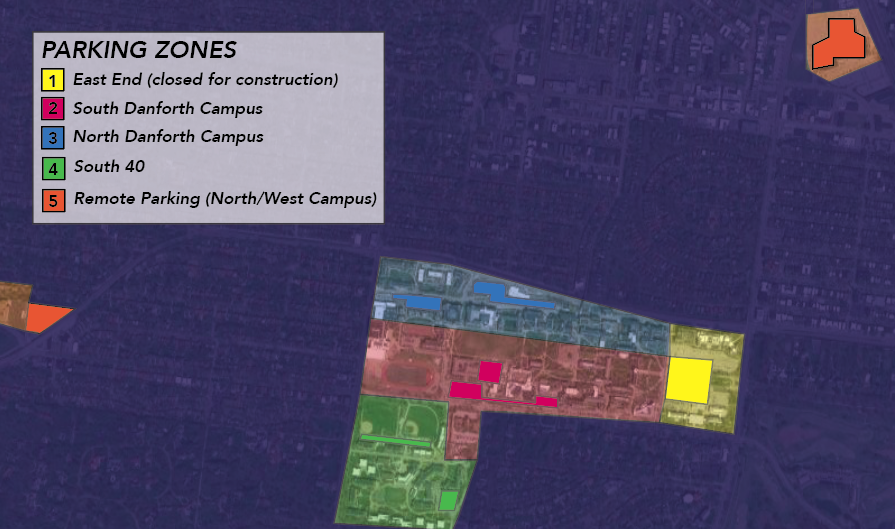 Most yellow permits, which will be available to juniors and seniors living on campus, will be tied to Zone 4, the South 40. Upperclassmen who live off campus in non-University housing will be eligible for a ParkSmart permit, which allows eligible permit holders to park at West Campus for less than $9 per month. According to Dedric Carter, vice chancellor for operations and technology transfer, there will also be transportation between West Campus and the Danforth University Center offered to those students.

“In addition to the U-Pass access offered to the Metro, there will be two shuttles from West Campus running from 7 a.m. until 10 p.m. on 15 minute cycles Monday through Friday,” Carter said.

Though students have voiced concerns about lack of parking availability previously, the sudden change to a lottery and zone system was sparked by the upcoming construction.

“[The East End construction] obviously drove some decisions because there’s a large number of parking spaces on the East End, and some planning needed to happen to address the lack of parking during the construction, but the University used this opportunity to make some long-term changes to the parking system,” Associate Vice Chancellor for Student Affairs Rob Wild said.

These aren’t the only changes affecting students who park on campus: The annual price for a yellow permit is also set to increase by 8 percent, to $757.25. The University website notes the monthly cost will remain unchanged at $58.25, as the permit will be valid for 13 months instead of just 12.

Everyone cannot receive their first choice parking permit due to the high amount of students who park on campus.

“I think any time there’s change, people have to learn new routines. The reality is that we don’t have quite enough supply to meet all demands, so this really does require people to be a little more thoughtful about how they get to and from campus,” Wild said.

Permit assignments will become available after the lottery closes, and notifications will be sent out around May 15.