Fueled by anonymity: At the epicenter as scandals unfold

“This is a once in a lifetime opportunity,” they told me.

That’s the single thing I heard most, starting about a month ago, when I found out I would be the credentialed Student Life reporter sitting in the media filing center during the second presidential debate. 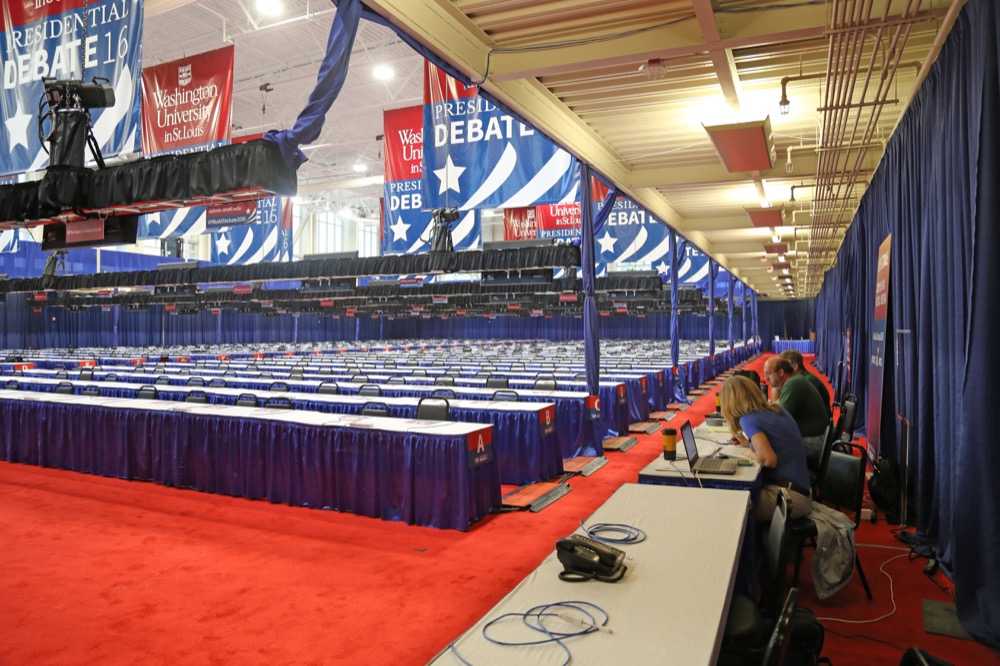 The media filing center for Sunday’s debate is fully decorated. Donald Trump and Hillary Clinton will participate in a town hall a short distance from there, in the Athletic Complex, tomorrow.

But this is not, and will not be, a story of two presidential hopefuls sparring on the grounds of their policies, their strategies, their opinions. To the largest magnitude we’ve seen, this election is increasingly influenced by information leaked by outside and anonymous sources. This is America’s moral dilemma, and it’s all unfolding at the newly renovated Sumers Recreation Center.

I’ll attempt to set the scene. I’m sitting in the mostly empty media filing center, where hundreds of journalists and I will watch the debate—just a few feet away—on 42 LCD monitors under giant banners that tout the emblem of our university.

Facebook in front, NBC to my left, TBS across the row. Bloomberg just walked past me doing a mic check, and I walked right past Anderson Cooper on my way in. Alhurra, a Washington, D.C.-based public TV channel that broadcasts to the Middle East, just stopped me for an interview.

But who are the key players here? All the big networks have set up shop in the debate hall. Hundreds of reporters and broadcast journalists will fill the room and write their stories. But somewhere, unbeknownst to us, it’s more than likely that someone is working very hard to uncover and dish out the next set of scandals. And that, we all know, is what the candidates will have to answer to tomorrow night, more so than any questions regarding their policies and ideas. We know where they stand. But are we done probing into their character?

Debates of this nature, in which candidates go head-to-head in response to direct questions from undecided voters on stage, typically favor those who can address small crowds with charisma, sincerity and, well, in coherent sentences.

And while Hillary Clinton has spent much of her career engaging in face-to-face conversations with average Joe and Jill, Donald Trump has exemplified the tenacity of his supporters through large animated rallies and online ramblings.

Another thing to keep in mind is that town hall debates allow for a lot of movement around the stage, and the candidates are able to use their non-verbal communication skills to punctuate their claims. Politico highlighted a split-second from the 2000 town hall debate between Al Gore and George W. Bush during which Gore tried to move into Bush’s space as a form of intimidation, and was met with laughter from the crowd—it’s said to be the moment he lost. Small, maybe even imperceptible movements and interactions may heavily influence how the viewers decide who comes out on top.

We don’t know when exactly either candidates will be arriving tomorrow—the Secret Service won’t really let us in on that. I can say that from what I’ve personally observed, Clinton will be met with most of the support from students—Trump not so much. There are definitely Trump supporters at Washington University in St. Louis, but few have announced their alignment publicly, and the College Republicans decided not to endorse him (like many GOP leaders including Mitt Romney, Jeb Bush and now John McCain).

So in the wake of the (semi-anonymous) release of a particularly damning Access Hollywood tape and his 1995 partial tax returns (that were anonymously sent through snail mail), Trump will arrive at Washington University in St. Louis tomorrow to a lot of justifiably angry people, and a lot of questions. If he’s lucky, some of those might even be about his policies.

“Trump knows he’s going to be absolutely roasted on our debate stage tomorrow night. I love that he’s probably dreading his visit to Wash. U. as much as we are”, Elizabeth Levinson, co-president of Washington University Students Advocates for Reproductive Rights (WU StARR) said. Her group works directly with Planned Parenthood, an organization met with a lot of dissent in Missouri, specifically.

But Clinton, despite being the campus favorite, has also had her fair share of scandals, and those haven’t been ignored. Hopefully, those pressing Trump about his attitude toward women, taxes and more, will press her too, on Benghazi, Libya, the Democratic National Committee debacle, the contents of her leaked emails and more.

It’s unlikely that we’ve heard the last from these anonymous sources, who have the tendency to strike—and counterstrike—at crucial campaign moments. These revelations are simply too effective for their captors to stay silent. From this election we are learning as voters that the power is not so much in the hands of candidates but the curators of their histories. Undecided voters are browsing Reddit, scrolling through Facebook and waiting to hear about the next biggest blunder.

“Be careful what you post; it may come back to haunt you someday,” they told me.

If we’re learning anything from this election, it’s that the digital age is a scary place for politicians—and apparently businessmen and women too.