The protest was designed to be a space for only black students to criticize the silence on campus regarding current police brutality issues around the country that target the black community at large. Non-black students were encouraged to give support through attendance, but were asked not to participate in the actual protest. 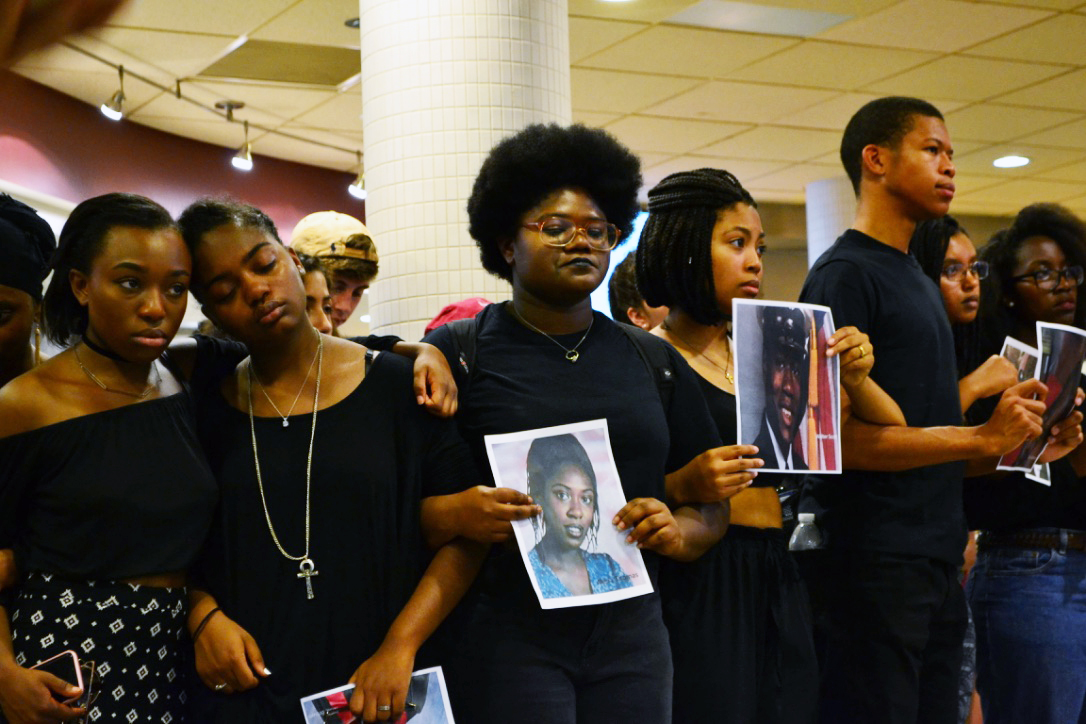 Students began by gathering in the dining hall area of the Danforth University Center. Wearing black clothing, each student was given a photo of a victim who have died under the hands of police as well as signs that read phrases such as “White Silence” and “Black Lives Matter.”

Once ready, the group of students proceeded to march, in rows of five people, towards the South 40 through the underpass. On their way, they chanted “You can’t stop the revolution” and “Hands up, don’t shoot,” grabbing the attention of people walking by.

When the group arrived at Bear’s Den, protesters linked arms and surrounded the food stations, blocking others students from ordering food and bringing all dining hall activities to a halt. More chants such as “It is our duty to fight this” and “These killer cops have got to go” directed attention to the protest.

“White people don’t feel us,” yelled one of the student protesters.

During the protest, a number of students spoke about experiences they’ve had, particularly on campus, as black students. One protester expressed her frustration over the lack of conversation.

“If you are silenced during times like this, you are automatically on the side of the oppressor. I cannot take the silence on this campus anymore,” she said, during the demonstration. “I’m hurting, my people are hurting and if you are uncomfortable right now, you cannot understand how uncomfortable I ever am.”

Throughout the peaceful demonstration, different students took turns to share their feelings and personal experiences about racial profiling and the frequent instances of police shootings. They criticized the University for neither addressing this national crisis nor providing a support system for black students.

This criticism arrives after Chancellor Mark Wrighton came under fire for misidentifying Alton Sterling, victim of a Louisiana police shooting in July, as Cameron Sterling. In the past, Wrighton has also been condemned for his inaction when it comes to social issues as was the case during the Ferguson events in 2014.

“The platitudes get very tiring when we get a five-paragraph email,” senior Corban Swain said. “I don’t have a perfect recommendation, but it’s willing to hear what you’re saying. And hearing is more than sitting in a room and listening. It’s recognizing that there is pain and recognizing that those things that happen out there, one—they happen in here in some form or another, and two—they’re affecting us deeply.”

In general, protesters explained that their demands were to be heard and seen by the University and to end invisibility on campus when it comes to racial issues. They also advocated for a better treatment of Washington University workers from the student body.

“The attitude towards the workers, you know what I mean, some of that stuff is very true,” Michael McCartney, a table porter at Bear’s Den, said agreeing with comments made during the protest that students are disrespectful towards Bear’s Den workers. “[Students] come in here, they think they can leave trash on the tables, they feel like they don’t have to sort anything, they don’t have to say thank you, [they] knock stuff over.”

In addition, the demonstrators explained to the rest of students how they can help them address this issue of invisibility and silence at the University.

Sophomore Clayton Covington recited a poem dedicated to all the victims who have died as a result of police brutality. His reading encapsulated the emotional response that many protesters and spectators outwardly expressed throughout the demonstration.

“I’m sitting here crying as I talk to you because someone’s sandwich is more important than hearing about the death of black lives and recognizing that it affects your fellow students,” Swain said. “[It’s about] recognizing that this culture on campus is not this immaculate paradise that they so try to design it to be especially for students of color.”

In the crowd, students embraced and comforted each other while others clapped and snapped their fingers as signs of support. Washington University Police Department officers were also present at the scene. A sole moment of retaliatory conflict came after a protester made a negative comment about Donald Trump; A student interrupted by yelling, “Make America great again,” a slogan popularized by the Republican presidential candidate and his supporters.

Cashier Tammy Mayo could not hold back her tears when she saw the group of black students protesting in front of her. She was consoled by a fellow coworker during the entirety of the demonstration.

“It touches close to home because my children are the same age as these kids and I try to be strong for my children and I try to keep them out of harm’s way but as a parent, I can’t do too much about it,” Mayo said.

The protest ended as the group of students exited the building as they continued chanting, “You can’t stop the revolution,” leaving behind a quiet Bear’s Den which resumed its usual activities soon enough.