Styrene, a white plastic that is mass produced and used in a variety of commercial items such as Styrofoam cups and takeout containers, is commonly used by students in College of Architecture for making architectural models.

The material, however, is known to have harmful effects on humans. In 2014, the National Research Council signed off on the National Toxicology Program’s decision to characterize styrene as “reasonably anticipated to be a human carcinogen.” 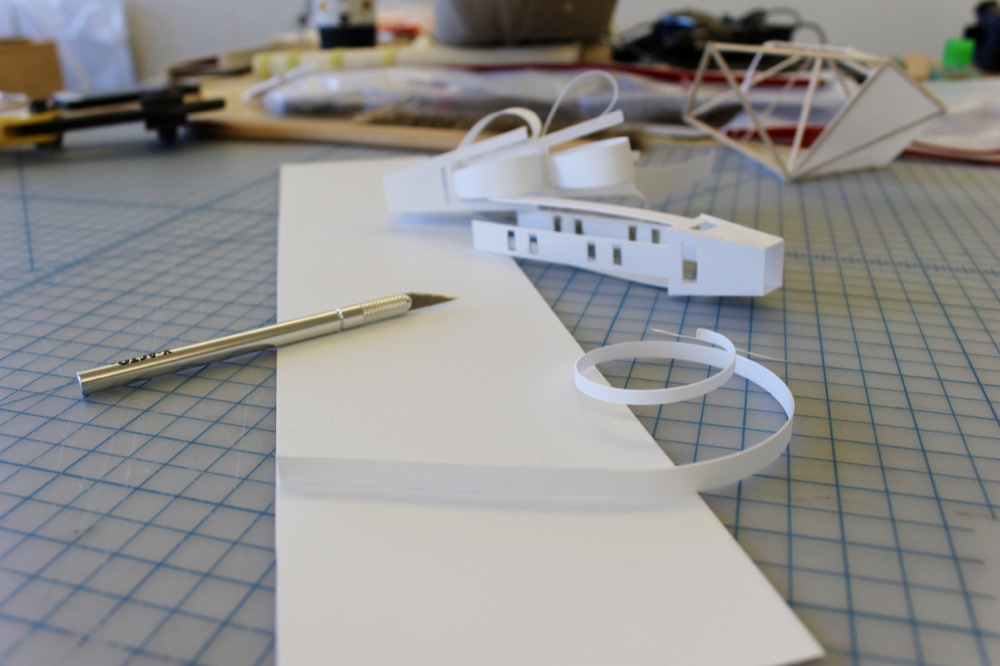 Sheets of styrene sit at an architecture student’s workspace. The material, although useful for architectural modeling, has been linked to possible cancer risk increases.

In accordance with this movement, the architecture school has taken its own steps to begin phasing out student’s use of the cancer-causing material.

The school is discussing the health concern and exploring alternative materials, Dean of Sam Fox Carmon Colangelo told Student Life in an email. He added that a number of architecture schools have already banned the material and that Sam Fox plans to do so by next fall.

Since word of styrene’s toxicity has spread, cities all across the United States have undertaken campaigns to reduce its ubiquity. As of June 2015, cities in 10 different states have officially banned styrene with three others considering to follow suit.

Often, architecture students are required to sand, laser cut or melt styrene, which spreads particles of the material into the air. According to the Agency of Toxic Substances and Disease Registry, inhalation of styrene can causes feelings similar to those of intoxication, and in serious cases, liver damage.

Many current architecture students are excited about the removal of styrene mainly because of the various health hazards.

“When everyone is using it, you could definitely feel a difference in the air,” Bobrow said. “Sometimes I have to leave studio because I get such bad headaches. There were even times where I felt like I had chronic headaches because everyone was using styrene for their final models.”

It’s not just the styrene itself that can cause irritations—in order to join two pieces of styrene, students have to use a solvent called Weld-On. The fumes from this solvent have similar effects as the styrene dust when inhaled, which has lead students and professors alike to nickname the solvent “poison.”

Sophomore Kevin He described how the dangers of styrene were never detailed in full—even into his second year at Sam Fox.

“When I came into the art school, the professors just told us that styrene was dangerous, but never told us about all the problems with it,” He said. “We never had a safety tutorial. I learned how to use styrene through trial and error and out of all the materials we use here, styrene puts us in the most amount of danger.”

Bobrow noted that alongside the lack of information is a lack of proper safety equipment in case of an emergency.

“One of the guys accidentally squirted ‘poison’ in his eye, and when he went to the wash his eyes out, there was no eyewash in the eyewash bottle,” Bobrow said.

The ban may be an opportunity to expand creativity in the architecture school, He believes.

“Sometimes I feel like instructors force us to use styrene,” He said. “Design and creativity is being limited by styrene, and I wish instructors would showcase other materials and how to use them.”

Although some students are vocal about the banning of styrene, others are worried that it will negatively impact their work and productivity.

Sophomore Sam Landay explained that it’s not uncommon for architecture students to put their projects before their health.

“I like styrene because you can get it in so many different shapes and sizes,” Landay said. “It’s cheaper than wood and you can heat it to change its shape. You can do the same thing with other materials like wood, but it’s much more labor-intensive.”

Even outspoken opponents of styrene admit the necessity of utilizing the material.

“I definitely still use styrene,” Bobrow said. “In fact, my last model was made entirely of styrene. People aren’t penalized when using styrene, but it is definitely considered the standard. I know that if you don’t have styrene models in your portfolio, that looks weird in architecture.”

Various other architecture faculty members contacted by Student Life declined to comment on their stance on the styrene ban.