Local experts explored the U.S.’s response to the four million Syrian refugees seeking asylum globally and Missouri’s low rate of passport issuance in a panel on the global refugee crisis.

The panel, a Town Hall event hosted by international and area studies honorary Sigma Iota Rho Thursday afternoon, came as one of many debates nationwide as at least 28 United States governors have vocally opposed admitting refugees to their respective states. 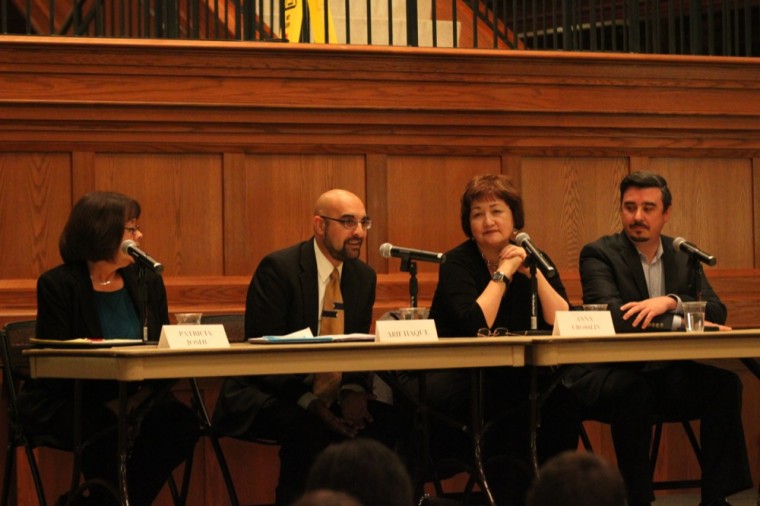 Panelists discuss what classifies someone as a refugee during the beginning of the “In a Strange Land: The Refugee Experience in the United States” panel on Thursday evening in the DUC’s Tisch Commons. The event was sponsored by Sigma Iota Rho Honor Society.

The discussion took on a historical perspective as participants evaluated the situation in Syria in the context of refugee crises throughout the last century. It also sought to frame recent events as they relate to the St. Louis community.

The discussion began by outlining the differences between refuge, asylum and internal displacement, which, according to Crosslin, are important distinctions to make.

“It’s a worldwide refugee crisis—60 million people are displaced outside of their homes. Of those, 20 million people of them are refugees and, as we said a moment ago, that means they are outside their country,” Crosslin said. “Forty million of them then are internally displaced. Of that population, the largest groups are right now the Syrians and the Iraqis.”

Panelists also discussed the historical precedence of refugee crises in the United States.

“In the late 1940s, the policy was that you had to be a European refugee,” Haque explained. “Then later, it was expanded to communist regimes. But it wasn’t until 1980 that the U.S. adopted the U.N. definition of refugee into the law.”

Joshu also commented on the progress throughout the years in raising awareness about the refugee situation despite the recent backlash that refugees have gained.

“When I started [IRWP] 10 years ago, we had 20 students, and now I have 120 today,” Joshu said. “Because whatever the story is, it’s got their attention, and it has made them stop and think, and they’re looking at how they can make a difference.”

Hamilton emphasized the historical role of the United States in aiding refugees worldwide, which he believes it is a key factor when talking about the crisis.

“The United States is the single largest resettler of refugees in the United Nations’ system of refugee resettlement and that point has been lost in discussions recently,” Hamilton noted.

When the time came to discuss the role St. Louis plays in the refugee crisis, panelists highlighted some of the difficulties of this process, especially in light of the recent tragedy in Paris, which sparked a nationwide debate on refugee policy.

“One of the statistics that always sends a chill up my spine is when I tell people that Missouri is the state that has one of the lowest rates of passport issuance per 1,000 in the nation,” Crosslin said. “Once again, that translates to people who don’t have a global perspective because they haven’t lived or traveled, they don’t know people who are foreign-born and we’ve seen the outcome of this in the last couple of days in negativity, in Missouri particularly, and outstate Missouri, but even here in St. Louis.”

During the Q&A section, Crosslin also noted that France, even after the bombings that occurred on Nov. 13, will continue to house refugees as previously promised.

Sophomore Iliana Ragnone was surprised to learn about the process that refugees have to undergo to be resettled.

“It was really interesting to hear the perspectives of people who have seen different types of situation,” Ragnone said. “It’s cool to see that no one story is the same as the next one.”